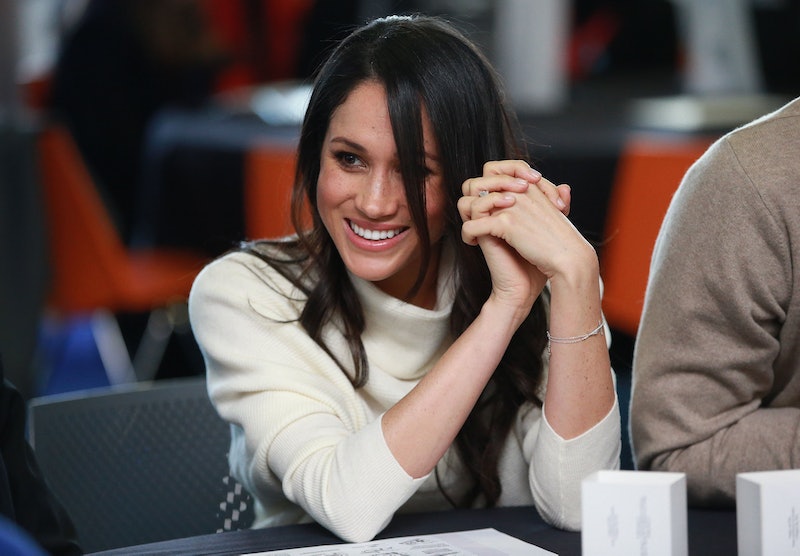 The Sussexes have released their first Christmas card since welcoming baby Archie into the family, and he's the star of the holiday show. Of course, his parents are there, too, looking on adoringly. For royal fashion fans, though, Meghan Markle's Christmas card sweater may serve as a bit of a distraction from Archie thanks to its familiarity.

In the animated card posted by the Queen's Commonwealth Trust (of which Prince Harry and Markle serve as president and vice-president respectively), Archie is seen crawling up to the camera's lens with a curious smile on his face while his parents look on lovingly in the background. A Christmas tree sparkles behind them all, and a holiday greeting with well wishes surrounds them.

According to Express UK, Markle's Christmas look in the photo actually features a rewear. The Duchess is wearing the same AllSaints sweater she donned back in May 2018. Markle first wore the piece to an International Women's Day celebration at Millennium Point in Birmingham. However, the cream colored, funnel neck sweater may have gotten a bit overlooked at the time. During the trip, Markle also wore one of her most well-known and sought after pieces, a navy and white J.Crew coat that ended up selling out after she initially wore it. Now, though, the AllSaints sweater has returned for another look.

As of press time, Markle's Christmas sweater is no longer available in the exact cream shade she's wearing in the photo. However, the piece, called the Ridley sweater, is up for grabs in limited sizing in a toffee hue and crimson. The brand is also currently offering the piece on sale with the price reduced from $260 to $180.

According to Elle UK, Markle and Prince Harry are spending Christmas in Canada with the Duchess's mother, Doria Ragland, while catching up with close friends. While this is undoubtedly exciting for the couple, fans of Markle's style may be a bit disappointed. Due to the family being overseas, the Duchess of Sussex nor her husband will be making the walk to Christmas Day services at Sandringham in their finest Christmas styles alongside Kate Middleton and Prince William.

However, don't despair too much if you love seeing the royal family out and about. According to The Sun, not only will Kate Middleton and Prince William be making the walk, but the pair have decided to allow their children Princess Charlotte and Prince George to make their Christmas debut in 2019. The two eldest children will be heading to services with their parents, and it's sure to be one of the most adorable things you'll see on Christmas Day.

While you likely won't see more Meghan Markle Christmas fashion, there will still be more royal style coming thanks to Kate Middleton. Plus, the festive fashion moment will come alongside a healthy dose of cuteness thanks to Princess Charlotte and Prince George.