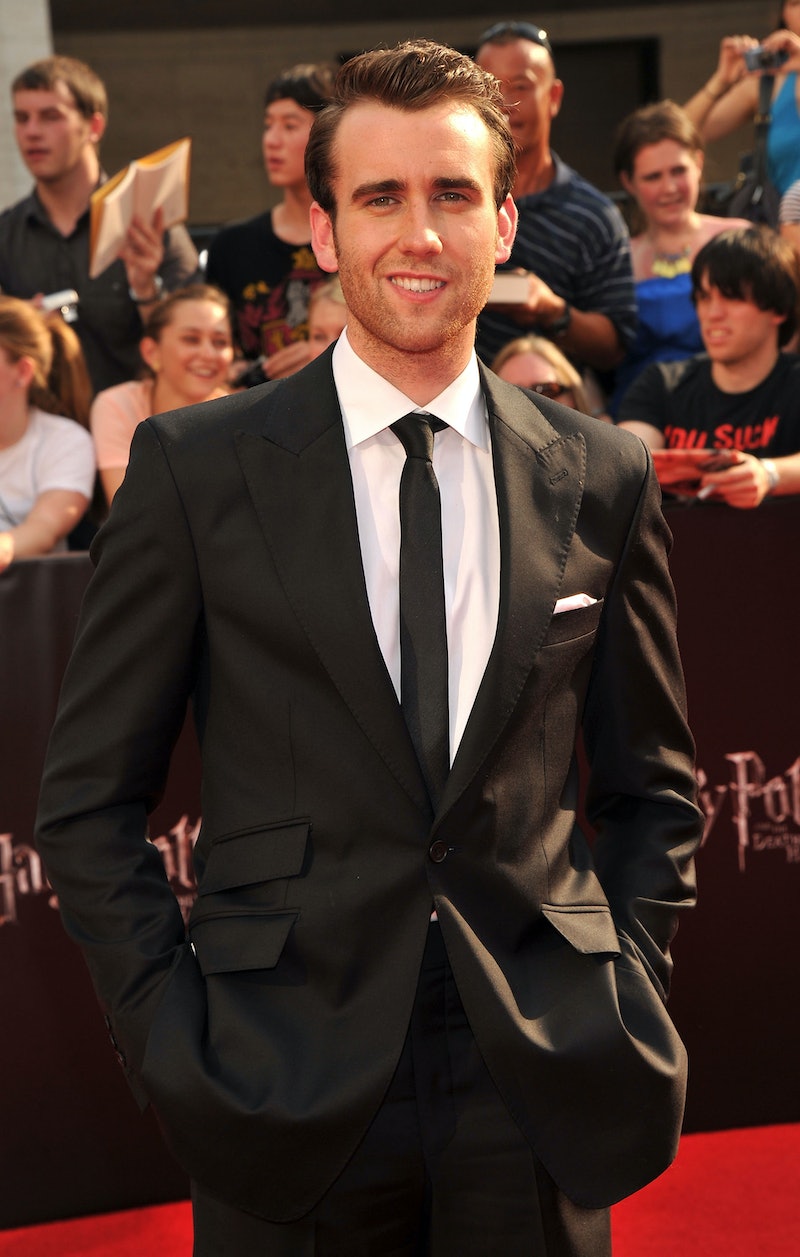 Where were you when the Neville Longbottom underwear pics dropped?

I know where I was. I was sitting in this office, some two years ago; or perhaps not sitting, but transcended to some other realm, into the body of one Hannah Abbott, a fictional character who up until that point I had not expended enough emotional energy on to feel envy for. (I mean, get it, girl.)

Yes, we all love ourselves some Neville Schlongbottom, which is the horrifically inappropriate nickname I gave him after the internet was graced by the oddly alluring combo of Matthew Lewis in his green cardigan and white boxer briefs. But the lost productivity of that entire work day aside, I have to ask: Was Neville Longbottom's not-to-hot narrative in the Harry Potter movies a handy visual representation of him gaining the confidence we saw in the books, or did it ultimately distract from the narrative?

First, let's examine Neville as a character. Indisputably the sweetest summer child of the entire series, one of his primary narrative functions isn't even revealed until much later in the books — that he serves as a foil to Harry, and that the prophecy that tied The Boy Who Lived's fate to Voldemort's could have just as easily been his.

But Neville was a foil to Harry in ways that, growing up, we did not have the wherewithal to recognize. While we were busying ourselves in childhood looking at things through Harry's lens and relating to him as a character, it wasn't until later, when confronted with the realities of adulthood, did we understand that it was Neville's narrative, not Harry's — and not even Hermione's — that were ultimately preparing us for adulthood.

Adulthood, which brought us such things as (*takes a deep breath*): low self-esteem! Imposter syndrome at work! A deep-seated paranoia that our friends were all progressing and succeeding in life, and leaving us behind! The inability to advocate for ourselves the way we would advocate for a friend! A never-ending series of cringe-worthy, embarrassing incidents living in a world we're ~not quite yet~ equipped to deal with, that are burned into the back of our brains forever!!!

Oof. Sorry. I'll wait here a second while you pick your organs up off the floor.

But see, this is exactly why we needed Neville. We watched Harry and Hermione and other characters we related to ourselves deal with extreme circumstances as they come into their own. But in the books, we watch as Neville slowly, excruciatingly wrestles not just with his external circumstances, but with his own sense of self-worth. We watch as his circumstances force him to acknowledge an inner strength that he had all along. We watch as he stumbles, and finds his voice, and stumbles again, and ultimately grows into a force that he never thought he was capable of becoming — and we watch it through the lens not just of readers, but through the lens of an audience that, not shortly after, confronted all of these issues in our own 20-something lives.

And in the movies... well. Neville gets really, really hot.

Yes, yes, that is true. No human could have stopped that genetic tide from taking over; that being said, there were deliberate attempts to gradually guide Neville's character from awkward to less awkward to Snake-Slaying Stud (TM) from the very beginning. We didn't all just notice that Matthew Lewis "got hot"; he "got hot" in the exact moment the franchise decided they wanted him to, when they used it as a physical representation for his transition into a dorky, unassuming student to a fearless leader.

"I had to wear a fat suit and false teeth and stuff to stick my ears out, which was pretty grim for a few years, but it meant I got to keep my job so I can think of worse things," Matthew Lewis shared in an interview with Big Issue in 2013 — implying that his transition into the seventh film was certainly a deliberate one, meant to signify visually to the audience that Neville had undergone the significant growth we had so much more detail of in the books.

The thing is, in the books, Neville didn't become good-looking — or if he did, it wasn't mentioned. While Neville's arc is certainly somewhat of a surprise, because our protagonist is hunting Horcruxes in the woods for the tail end of it, it is all the more satisfying because readers watch as Neville carves a place into the world, one where he is defined and respected by the choices he makes.

Sure, he wasn't defined solely by his looks in the movie — but his physical transition certainly made his personal transition take a backseat, to the point where "Longbottoming" became a verb in the millennial lexicon.

And while his physical looks dominated the conversation about Neville Longbottom toward the end, we lost some of the arc that made him so important: the reassurance that there is more than one kind of way to be brave; the comfort that we might eventually find a way to grow into our skin; the idea that even when we feel like the tagalong friend, we have our own important roles to play.

Though his newfound badassery got plenty of air time, the movies, strapped for time, ended up cutting some of the most pivotal parts of Neville's narrative in the process — in particular, the scene where the gang meets Neville with his parents at St. Mungo's.

"I thought it really conveyed who Neville was and why also in the final film he becomes this hero — he’s doing it all for his parents," said Lewis to Big Issue. "I thought that was a real important part of his story arc and his journey and David [Yates] agreed and unfortunately we never got the chance to do it. We were both a bit gutted by it."

The movie does, of course, address the fate of Neville's parents, but a lot of the impact is lost — particularly when the prime focus on Neville's heroics in the seventh movie is his hotness. In the books, he became a confident, skilled leader despite the way he grew up, and by finally accepting himself rather than seeking the acceptance of those around him; in the movies, without more necessary insight into his character, it seemed to smack a little too much of Neville finding his way because he finally looked like a "leader" by more traditional Hollywood standards.

All this is to say, Neville Longbottom's personal arc deserved a lot more attention in the films, the same way a lot of things deserved a lot more attention in the films; but more to the point, it deserved not to be overshadowed by the external element of his looks. His narrative was too important and had too much to offer its young fan base to be reduced to something that was never meant to be a factor in his story in the first place.