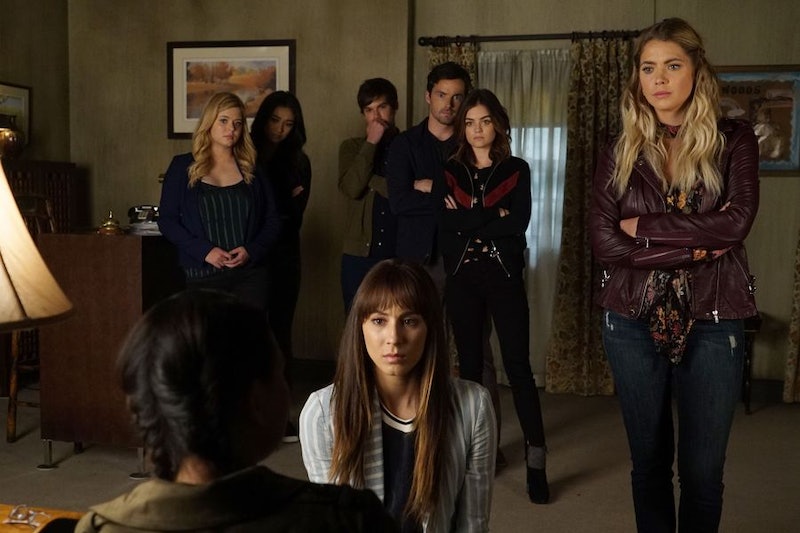 Ding, dong — Pretty Little Liars is nearly dead. The saga of Alison, Emily, Hanna, Spencer, Aria, and assorted friends and enemies will draw to a close on June 27, leaving behind seven seasons of questions and incompetent police officers. What will fans do without it? Well, if you ask me, Pretty Little Liars should have ended after Mona’s A reveal way back in Season 2.

Don’t take this the wrong way, but after Season 2 is when I think PLL really fell off the deep end. Sure, weird stuff happened to the Liars when Mona was running things (and Mona did try to ruin their lives once or twice), but the weirdest, most twisted events happened afterward.

Here are some immediate examples: Hanna getting a message drilled into her tooth, A.D. pretending to torture the Liars with a cattle prod, the Liars being kidnapped and put into the Dollhouse, Alison’s being impregnated with Emily’s stolen donor eggs, Noel Kahn literally losing his head, and Sydney Driscoll (it still makes little sense why she ever appeared on the show). Would Pretty Little Liars have been better if it ended after Season 2 and these things never happened? Maybe. It's entirely possible.

That's a “maybe,” because in order to do two beautiful seasons of television, Pretty Little Liars would have had to change its pacing a bit. After seven seasons of watching the show, I can tell you that sometimes, it drags on and on and on, to the point where I can fast forward my DVR through it and not really miss any main points.

I’m a big fan of the British television model — typically, British sitcoms and dramas are short seasons of about 10 or so episodes, they have them air once a year, and a lot of them end fairly quickly. They’re easy to digest, but most importantly, they just make sense. There isn’t a lot of filler because there isn’t room for it. Pretty Little Liars loses its focus in some seasons, because the show asks too many questions and doesn't answer half of them. It's virtually impossible to catch a growing boulder rolling down a hill, and that's eventually what the show's mythology has turned into.

In terms of Mona being A, her story of revenge made the most sense – Alison tortured Mona for being a “nerd” in school, and Alison’s friends sat back and did nothing. There was also that whole “Jenna thing.” The Liars are really not great people, and I totally see Mona’s motivation for wanting to get revenge. She was treated so poorly, and there was no reason for it. Alison was especially awful to Mona.

While I sort of understand Charlotte’s motivation for wanting to punish people (her family abandoned her, yadda yadda), I don’t see why punishing Aria or Hanna fulfilled her need for revenge. I’ve never completely understood why lumping all the friends into her villainy worked.

I love Pretty Little Liars, but I’m convinced that it would have been a tighter, more entertaining show had it committed itself to revealing Mona as A, and then called it a day — leaving the rest of the Liars and their assorted beaus and family members to live their weird, secret-filled lives in Rosewood, Pennsylvania.