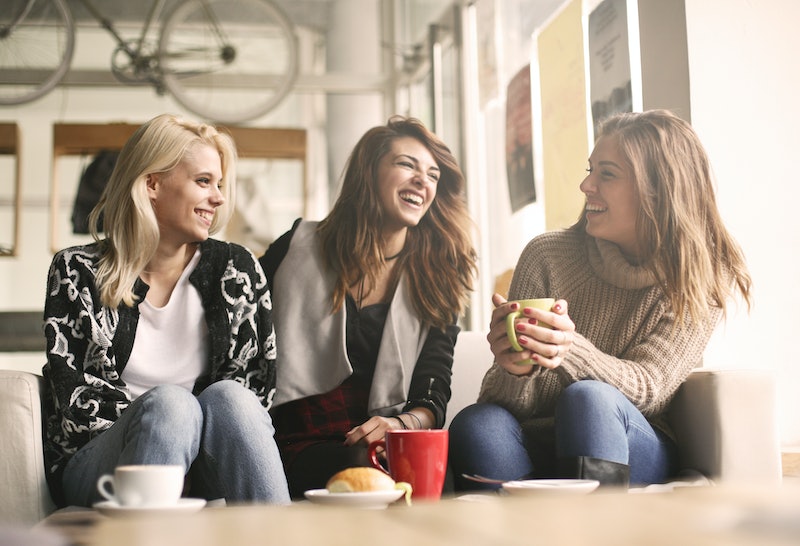 We all have that one friend who seems to have an easier time embracing single life. While others might worry about being alone or feel pressured to find their next partner, this friend seems to be OK with where they're at. They don't stress out or feel sorry for themselves, but instead find ways to enjoy being single, and everything good that comes with it.

This mentality stands out because it can be tough to be single, especially in a society that tells us it's sad and wrong. Not to mention, if you're looking for a relationship, the entire lifestyle will likely seem far removed from what you actually want. It can feel uncomfortable and unwelcome, instead of something worth embracing. But that's actually what sets these other folks apart.

According to psychologists, being OK with being alone — even if you don't want to be single forever — is all about appreciating the positives. "People who embrace single life see it as an offering rather than a lack," Dr. Marisa Franco, Ph.D., a psychologist and relationship expert, tells Bustle. "Single life offers freedom, the ability to work on personal goals, and to more deeply cultivate non-romantic connections."

They take full advantage of it by going back to school, hanging out with friends, and focusing on other areas of their life that could use a boost. They enjoy having a schedule that's 100% their own and find ways to fill it up, particularly with things that may have been more difficult to do when they were in a relationship.

It can also come down to how good they are at spending time by themselves, because it is a skill. "People who have had practice being alone, who are comfortable being alone, and who know how to attend to their own psychological needs are much more likely to feel comfortable being single," Dr. Joshua Klapow, Ph.D., a clinical psychologist and host of The Kurre and Klapow Show, tells Bustle.

For those who don't rush into anything, they end up learning how to sit with themselves, think about what they want out of life, and practice taking care of their own needs. "Someone who sees themselves as self-sufficient and not in need of someone else is going to thrive in singlehood," Klapow says. And that's yet another skill that can develop with time.

If you're currently single, and wish you had a better opinion of it, there are plenty of ways to start embracing it. And the first is by getting rid of the idea that it's inherently bad. "There's a lot of negative messaging about being single that single people can easily internalize," Franco says. "It's important for single people to be critical about these messages rather than take them as fact ... Basically, the social messages about being single don't have to be your truth if you stay skeptical."

It can also help to reach out to other people in your life, and cultivate those relationships. "Single people should know that they need love and connection in their lives, but that can come from many different spheres such as through friendship and family," Franco says. "The assumption that we need 'romantic love' is a limiting falsehood that unnecessarily haunts single people."

You can certainly date, and look forward to your next relationship, and even be honest with yourself that singledom isn't what you want. But it's also possible to tear a page from the folks who are cool with being on their own for a while, and find ways to embrace it.

More like this
Are Quality Time & Gift-Receiving Love Languages Compatible?
By Lexi Inks
20 Women Reveal Exactly How Long It Took Them To Get Over Their Ex
By Amanda Chatel and Lexi Inks
Why A Libra & Libra Couple Might Become Codependent
By Kristine Fellizar
10 Ways To Be More Empathetic To Your Partner
By Raven Ishak and Lexi Inks
Get Even More From Bustle — Sign Up For The Newsletter