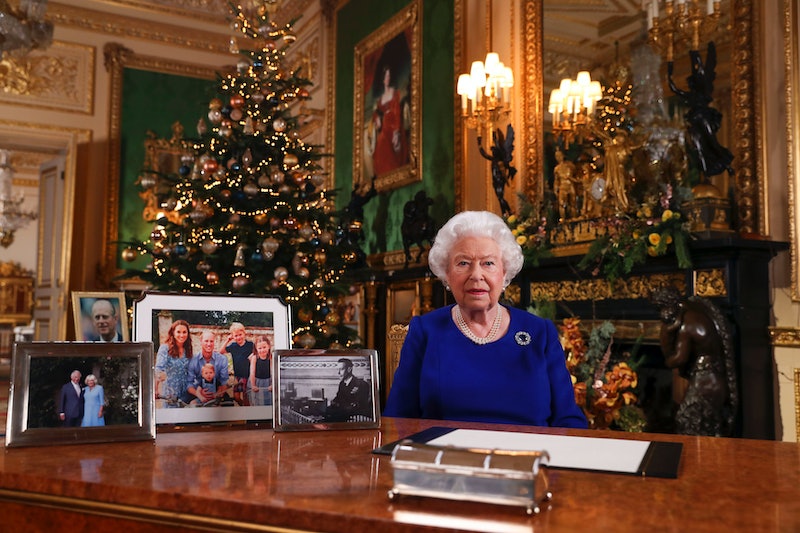 The British Royal family is reflecting on the past year — but the Queen's annual holiday address features one glaring exception. After a preview of the BBC telecast was released on December 23, royal watchers noticed that Meghan Markle & Prince Harry weren't featured in the Queen's Christmas address, which will officially be broadcast on Christmas Day in the United Kingdom. The Royal Family's official Twitter account shared a photo of the Queen filming her annual address, featuring the monarch sitting at a desk filled with family photos — specifically, of Prince Charles and Camilla Parker-Bowles and the Duke and Duchess of Cambridge and their three children.

According to E! News, the Queen will reference several of the Royal Family's biggest controversies of the past year in her speech, including Prince Andrew's connections to Jeffrey Epstein and the Duke and Duchess of Sussex's ongoing legal battle with multiple British tabloids. While she will not comment outright on any of those issues, in a preview of her speech, Queen Elizabeth states that "small steps taken in faith and in hope can overcome long-held differences and deep-seated divisions to bring harmony and understanding."

After noticing the omission of Meghan and Harry in the group of family photos on the Queen's desk, many social media users speculated that one of the "divisions" in question is the reported tension between the Duke and Duchess of Sussex and the Royal Family.

Despite the speculation on Twitter, Us Magazine reports that the selected portraits on the Queen's desk only featured the members of the Royal Family who are in line for the throne — namely, Prince Charles, Prince William and his three children, Prince George, Princess Charlotte and Prince Louis. The outlet also reported that the Queen featured a photo from Meghan and Harry's wedding in her 2018 address, as well as a wedding portrait of Princess Eugenie and Jack Brooksbank.

In addition to her eldest son, grandchildren and great-grandchildren, Queen Elizabeth also has two photos of her husband, Prince Phillip, on her desk, which is likely a reference to his recent hospitalization and health issues. After retiring from public life in May 2017, the 98-year-old royal has been treated for multiple health issues, including undergoing hip surgery in 2018. According to the New York Times, the Duke of Edinburgh was taken to the hospital on Dec. 20 in order as a "precautionary measure" for a preexisting condition, and was discharged on Christmas Eve so that he could celebrate the holiday with the Queen and Royal Family.

Queen Elizabeth and Prince Philip will not be joined by Meghan and Harry this year, as a Royal spokesperson announced earlier this month that the new parents and 7-month-old Archie will spend the holidays in Canada instead of attending celebrations in Sandringham, as is tradition. "Their Royal Highnesses The Duke and Duchess of Sussex are spending private family time in Canada," the palace said in an official statement. "The decision to base themselves in Canada reflects the importance of this Commonwealth country to them both."

After a very busy and stressful year, it's no surprise that Meghan and Harry have decided to spend their first Christmas with baby Archie somewhere private and relaxed, rather than attending the many public events that come with the holidays at Sandringham. And while the pair's decision may have caused some speculation of a rift between the Sussexes and the Royal Family, it's not the first time that one of the Queen's grandsons have opted to spend the holidays away from the spotlight: in 2012, William and Kate spent Christmas with her family, instead.

Despite their adorable Christmas card not getting a place of honor in the holiday address, there's no evidence that the Queen was intentionally snubbing Meghan and Harry this holiday season. No matter where they spend Christmas day, the Sussexes and the rest of the Royal Family will be celebrating the holidays with their loved ones, and setting any issues — rumored or otherwise — to the side.