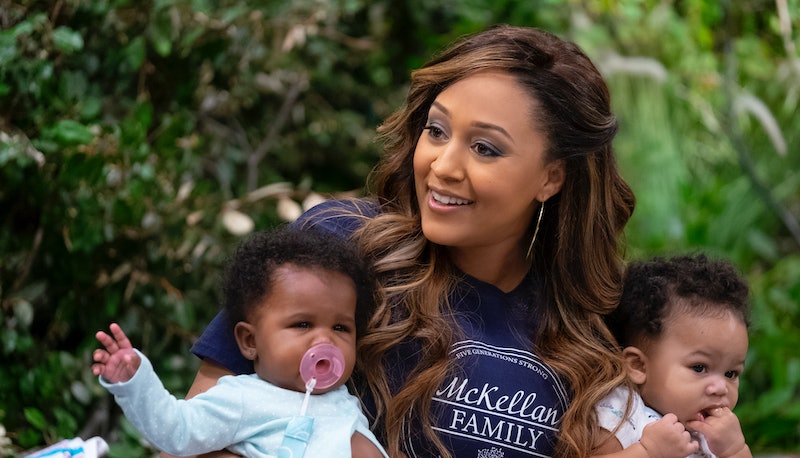 When anyone mentions Tia Mowry's first name, it's usually immediately followed by an "and." Ever since Sister, Sister first aired 25 years ago, she's been publicly lumped together with her twin, Tamera. But with Tia's new Netflix show Family Reunion, she's playing a character that feels close to home — and doing so without her famous sister by her side. It may have taken time, but Tia isn't bothered by constant twin comparisons anymore; the sisters have found a way to forge their own paths while still supporting each other along the way.

"As we've gotten older, we've realized we're more like the yin and the yang," Tia tells Bustle. "It's this one symbol together, but it has two separate parts... The more you nurture your individuality, when you come together you are even more powerful and strong and impactful."

Of course, it wasn't always that simple. That sense of individuality is something that she notes twins are "constantly fighting for" since the day they're born, as society tends to lump twins together as a unit. As a fraternal twin myself, I know exactly what she means. While twins share a unique bond, they also very much want to be viewed as individual people — not just someone's second half.

Not only do people group twins together, but they often try to fit them in seemingly opposite boxes: the brainiac vs. the class clown; the tomboy vs. the girly girl; the stereotype-filled list goes on. When I rattle off those examples, Tia finishes my thought: "Yeah, or the mean twin, the nice twin, the sexy one, and it's like, really, guys? Come on."

"If people are constantly trying to pin us together... it doesn't bother us as much because we know where we stand."

And because she and Tamera have strengthened their senses of self, she says, "If people are constantly trying to pin us together career-wise, it doesn't bother us as much because we know where we stand, we know who we are, we know what we are trying to accomplish." Plus, they have each other's backs no matter what. "The biggest thing that we do is we say, 'Good job, I'm proud of you.'"

On Tia's latest project Family Reunion, which premiered on Netflix on July 10, she plays Cocoa, a mom whose modern parenting style clashes with her mother-in-law's old-fashioned ways. Tia recalls the creator of the show pointing out how "effortless" the role seemed for her.

"I wanted this role so bad, because it was one of the closest characters to me in real life that I've ever worked on," she says, mentioning that Cocoa's parenting approach and family dynamic remind her of her own. "It's very refreshing and fun in that sense, because I kind of just have to be myself."

Just like with Sister, Sister, she's hoping Family Reunion really brings families together. "It's full of love, it's full of laughter, but also I feel like a lot of the storylines that we dive into are worthy of a conversation," Tia says. And now that it's dropped on Netflix, that conversation can officially begin.

More like this
Zooey Deschanel Can't Be Anyone But Herself
By Samantha Leach
Daryl McCormack On His Unusual First Audition With Emma Thompson
By Olivia-Anne Cleary
Who Is 'Stranger Things 4' Fan-Favorite Joseph Quinn Dating IRL?
By Grace Wehniainen
Sadie Sink Would Escape Vecna From 'Stranger Things' With This Taylor Swift Song
By Grace Wehniainen
Get Even More From Bustle — Sign Up For The Newsletter