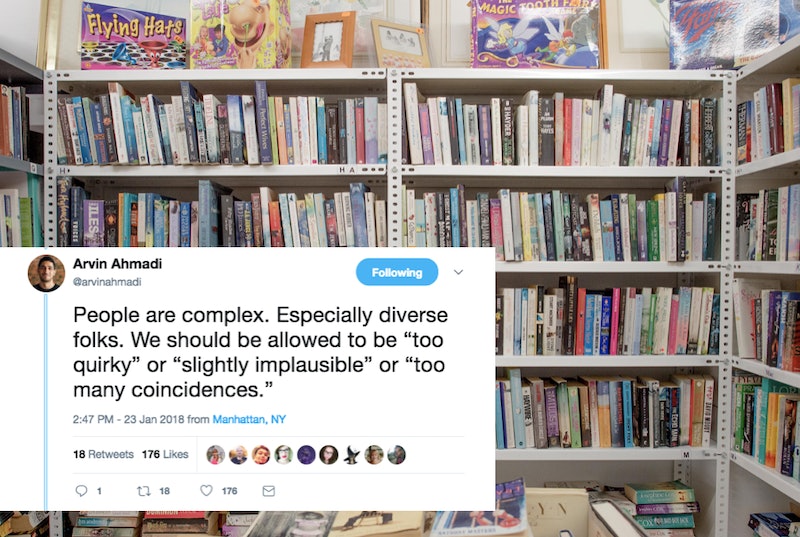 When I think of John Green, I immediately think of The Fault in Our Stars' Augustus Waters popping an unlit cigarette into his mouth and calling it a metaphor. Green's characters have been described as adorably "quirky" for this reason precisely. They use big words, they listen to indie music, and they take their metaphors way too far. By the time TFIOS was published in 2012 Green had become a pop culture phenomenon, helping — along with many others — to usher in an exciting rise of visibility for YA literature. It soon became evident, though, that many marginalized authors were not being given equal space at the table. We Need Diverse Books was founded in 2014 in direct response to the desperate need for more stories by and about marginalized people, eventually leading to another reinvigoration of YA.

The non-profit organization was co-founded by authors Ellen Oh and Dhonielle Clayton, with the mission of putting more books featuring diverse characters into the hands of more children. In order to do this, the group advocates for the publication of books about all diverse experiences, including (but not limited to) LGBTQIA, Native, people of color, gender diversity, people with disabilities, and ethnic, cultural, and religious minorities. And the results behind this movement have been astounding. Lee & Low released new data in 2017 which shows that more than a quarter of all YA books published in 2016 featured characters of color, compared to just 10 percent in 2013. In the last two years, we've seen more YA books than ever before covering crucial issues like racism, misogyny, homophobia, xenophobia, sexual assault, and mental illness.

But while the conversation surrounding diverse books has since expanded to include the call to prioritize Own Voices stories — books about diverse characters, which are written by authors from that same diverse group —publishing has been slower to catch up with this aspect of diverse books. According to the same Lee & Low study, only six percent of the YA books published in 2016 were written by Black, Latinx and Native authors combined. Which means, in essence, that we are only hearing six percent of their stories. Has this lack of Own Voices books unknowingly limited the way we define diversity in publishing?

It's a question I've been asking myself as a lover of YA, so I was nodding my head in agreement when debut author Arvin Ahmadi, whose YA novel Down and Across will be published on Feb. 6, recently brought the conversation to Twitter. Ahmadi took to social media to share some early criticism he has received about the characters in his novel. "I want to talk about a piece of criticism that's been bugging me lately," Ahmadi writes. "That certain characters are 'implausible' or 'too quirky.' Or maybe even 'unrealistic.'"

Ahmadi didn't elaborate on where the criticism had come from, but I think it does demonstrate a need to re-explore what readers expect from diverse books — and that conversation must start with the publishing industry. As has been widely noted, publishing is still overwhelmingly white and straight. A piece published in Publisher's Weekly in March 2016 shared the results of a survey in which it was determined that 79% of the overall industry was white. The same survey, published by Lee & Low, also stated that the overall industry was 89% straight/heterosexual, 96% non-disabled, and a shocking 99% cisgender. Equally importantly, book reviewers, too, overwhelmingly fall into the white, cis and straight categories.

Everyone is inevitably influenced by their own experience. So, I don't think it's a stretch to say that the lack of marginalized people helping to publish books by and about others from marginalized groups has a direct affect on the way these books are handled. And this has become readily apparent throughout the industry, not only in YA — in Nov. 2017, for instance, author Leonard Chang shared that his adult novel was rejected because his Korean-American characters didn't act "Asian enough."

YA author Adam Silvera, known for books like More Happy Than Not and History Is All You Left Me, both gritty, emotional takes on gay teen lives, chimed in to Ahmadi's thread with his own thoughts on the subject.

In my own experience of reading YA, I have picked up on the same trend that Ahmadi and Silvera have alluded to. I have struggled to find books, for instance, about Latinx American families that closely resemble my own. While I can't overstate the importance of shining a light on the harsh realities of immigrant lives and narratives about teens who are finding their voice within more traditional patriarchal or religious Latinx families, neither of those quite fit my own experience, or even my mother's experience. I've enjoyed these books, and I've learned so much about my own privilege by reading them, but they I don't really see myself in their pages. And I'm willing to bet that there are other Latinx readers who feel the same way.

It's obviously a problem when anyone decides that the only time marginalized characters are authentic is when they are representing more widely accepted portrayals, but there is something more subtle at play here, too — the incorrect insistence that all people from marginalized backgrounds are only living authentically if they are dealing with pain or abuse of some kind, most often directly related to their race, religion, or sexuality. In other words, white, cis, straight characters can be "quirky," despite whatever else they're going through, but marginalized characters cannot. This idea is doing a huge disservice to readers everywhere.

Yes, those lives are real, too, and those stories of pain and loss are crucial. The wide-reaching impact of Angie Thomas's powerful 2016 debut about racism and police brutality, The Hate U Give, is alone enough to prove the importance of this shift. Even John Green's latest book, Turtles All the Way Down, is a powerful Own Voices look at mental illness. But these are not the only stories. In order to truly champion diversity in publishing, we need to make sure we are making room for diverse authors who want to write the Latinx Fangirl, the black Paper Towns, the Asian Anna and the French Kiss. Books like Jenny Han's To All the Boys I've Loved Before series and Maurene Goo's upcoming The Way You Make Me Feel, out in May, are already paving the way for more diverse stories like these. But we need to insist on an inclusive publishing industry that recognizes all kinds of diverse stories as important, and one that allows marginalized people to exist, just as they are, "quirky" or not.

Because that teenage feeling of being socially awkward, the strangeness of finding love for the first time, the importance of discovering lifelong passions, and being supported by loving families — none of these things are exclusive to white, straight, cis people, and so should not be relegated to white, straight, cis characters. When we say that any one person's experience is only acceptable when it matches up to that of other people's experiences in that same group, we are perpetuating the dangerous stereotype that all "insert identity here" are the same — which is one of the biggest issues that diverse and Own Voices books are fighting against in the first place. With more marginalized people at every step of the publishing process, from writer to editor to publicist and beyond, we can start to insure that everyone's voice is truly heard, however many different molds they fit into.

We need more diverse books. Diverse books about important issues, diverse romances, diverse fantasies, diverse coming-of-age, diverse books so widely published that anyone, from any group, can see themselves represented within the pages. And the only way to ensure that is to let a wide variety of diverse people tell their own stories, however complicated, complex, and quirky they may be. It's not a problem that can be fixed overnight, but as Ahmadi says in his Twitter thread, "People are complex. Especially diverse folks. We should be allowed to be 'too quirky' or 'slighty implausible.'" Here's hoping that this is only the start of a new moment in publishing where we fight for these characters, and their stories, too.