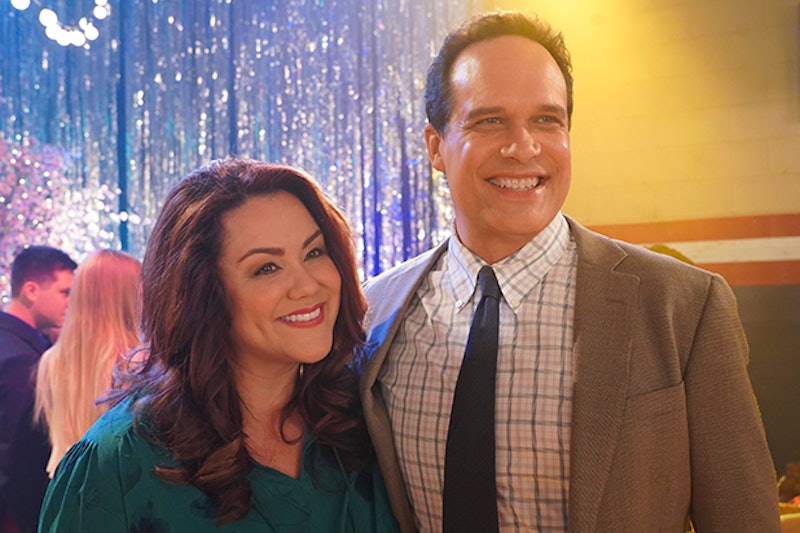 In times likes these, comfort television holds a special place in our hearts. ABC's American Housewife is exactly the kind of reliable, sassy, and funny sitcom that you can watch to help escape the stresses of staying home right now. The show stars Katy Mixon as Katie Otto, a plus-sized, outspoken mom of three trying to make her way in a suburban town full of fellow moms who in her eyes are much thinner, much richer, and seemingly much more "together" than she is. American Housewife has been doing well since its premiere back in 2016. But with the season 4 finale airing tonight, fans are probably wondering: will American Housewife will return for season 5?

In the fall of 2019, as the regular TV season was starting back up again, American Housewife began its fourth season yet was stuck airing on Friday nights; not a great time for a comedy to run, TV Line reported. But in mid-March the show moved back to Wednesday nights to lead into the final few episodes of the long-running, super popular Modern Family. Now that Modern Family has aired its series finale, American Housewife is moving into its 9 PM Wednesday night slot.

Season 4, however, is going to be cut a little bit short. As Deadline reported back in mid-March, a number of shows had to shut down production due to the COVID-19 pandemic. American Housewife was originally set to have a 22-episode season but instead will end at 20 episodes; tonight's prom episode will be its season 4 finale.

Since ABC had enough confidence in American Housewife to move it to Modern Family's time slot, it's probable that they're looking to renew the show for a fifth season. The problem being now that no one really knows how much longer the production shut down is going to last.

But the series has a long legacy of resilience. American Housewife started its life as The Second Fattest Housewife in Westport, and was based on creator Sarah Dunn's life in Westport, Connecticut. Though the series earned a few scowls for its reliance on fat jokes, the show has definitely moved on in its four seasons, turning more into a show about self-acceptance, no matter what that means.

And Katy Mixon herself has become somewhat of a self-love guru. As she previously told Bustle, "The thing is, honey, it's just who I am. You have to meet yourself where you’re at. There’s so much more to life than being self-deprecating and taking it so seriously. I'm all for health and taking care of yourself, but everyone is so different! The journey, the way of life, you can't model yourself after one person. I’m a big [proponent] of just doing you."