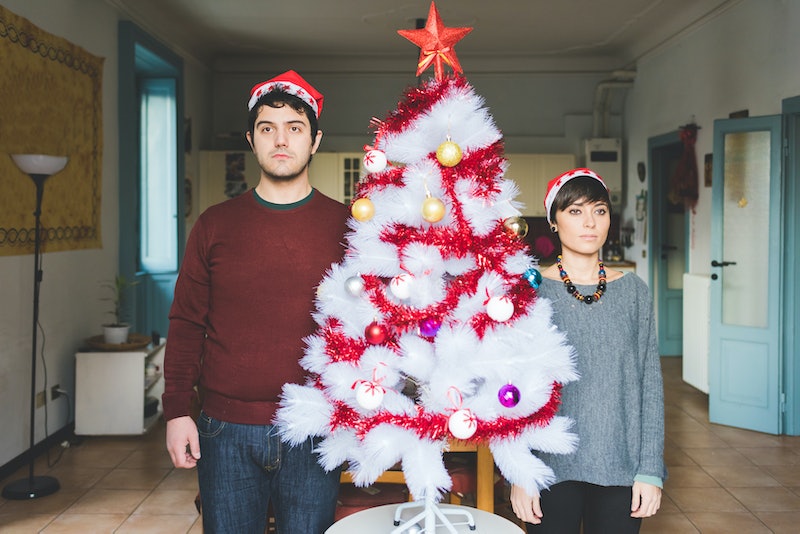 The holidays can be a challenging time for relationships and are actually the most common time of year that couples break up. According to a study done by London-based data journalist, David McCandless, and Lee Byron, a look at Facebook updates regarding breakups showed that the two most common times of year that breakups most frequently happen is right around Valentine's Day and the two weeks before Christmas. The latter probably was ~not~ on your Christmas list. But, we're currently in Mercury Retrograde — a time when you're specifically not supposed to breakup with someone. So, will breakups in Mercury Retrograde last during the 2017 holiday season?

According to Astrology Zone, Mercury Retrograde is when Mercury speeds past the Earth, which happens 3-4 times per year. Of course, Mercury is the planet closest to the sun, so its orbit is much shorter than our planet's. Because of this, when Mercury zooms by, you may feel it in the sense that it disrupts something in your life — like your love life, for instance. Chances are, you've probably felt it affect various facets of your life, but didn't even know it. The last Mercury Retrograde of this year is happening right now, from Dec. 3 until Dec. 22, and in the fire sign of Sagittarius.

You May Be Having Temporary Feelings

As for whether breakups in Mercury Retrograde during the 2017 holiday season will last — or not — Jaye at GiftedAstrology.com offers some input. "The word mercurial means fickle, temperamental, changeable — and that describes what you get when you try to break up with someone during this time," Jaye tells Bustle. "Most likely, it won't stick because these are temporary, fluctuating feelings. This isn't all bad, however, because the hidden gift from Mercury in Retrograde is that we become our own best teachers. Try to use the energy to look at your relationship from another angle, and when Mercury does go direct, you can use the breakup time as a growing period for yourself, to reassess what is truly important to you. That way, regardless of what happens in your relationship, you've made the most of the astrological energies, deepening the love and acceptance for yourself."

You May Not Be Thinking Clearly

Linda Furiate, a consulting Astrologer, Healthy Habits Expert, Reiki I&II, Inspirational Guide, and the founder of Of Universal Mind, says. "The planet Mercury rules all forms of communication," Furiate tells Bustle. "He (Mercury) rules our rational and logical mind with our ability to articulate our desires. While it is specifically hard to predict the exact outcome of a relationship breakup during a Mercury Retrograde without knowing a person's full birth chart, very often, two people may easily get back together once this trickster planet continues on its forward journey. Since we may not be thinking clearly during the Retrograde and possibly make a hasty decision without first gathering all of the appropriate data, one may tend to act prematurely — which may lead to a breakup during the Retrograde."

So what should you do if you just broke up or want to breakup with your partner right now? "I often advise my clients (who broke up during the Retrograde) to schedule a heart-to-heart chat once Mercury is direct so that they may air their true thoughts and feelings," Furiate says. "Often, once the couple is able to rationally and logically discuss both of their needs, a reuniting is highly probable. The important thing to remember about the Mercury Retrograde cycle is that 'the truth may typically be revealed during this cycle,' and that it offers us a test in patience. He is asking us to 'take a step back, breathe, and think before we speak.'"

Misunderstandings Are Common During This Time

But Wave Rayne, Metaphysical Teacher, Author, Leader of Synchronized Global Meditations of Peace, Star Codes Coach, and the first known astrologer to publish articles, teach online courses, and present slideshow lectures on both the occurrence and potential of All Planets Direct Motion (APDM), says the chances of getting back together may be small. "The Retrograde can cause these little annoying misunderstandings, and they keep happening for some reason, like every day," Rayne tells Bustle, "until, eventually, things blow up and the relating is over. If a relationship breaks up during the Retrograde, the chances of recovery are kind of slim. Still, there are exceptions, so all is not lost. The exceptions are for those pairs who are mutually in love with each other. They usually can weather the storm and, after the breakup, will get back together fairly soon, maybe even as soon as Christmas."

While the holidays are typically "breakup season", this year, Mercury Retrograde adds a whole new (and confusing) layer to the mix. Basically, proceed with caution, and you can always reevaluate the relationship/breakup once Mercury Retrograde ends Dec. 22.