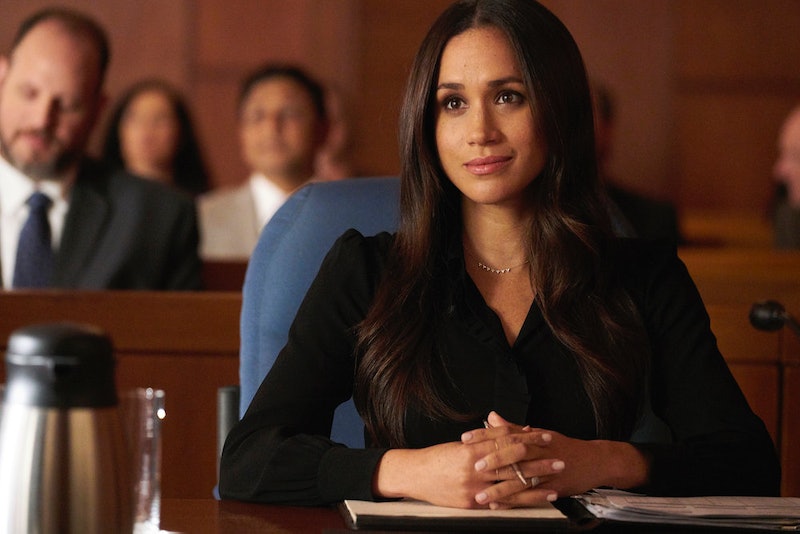 With all the good news flying around, there were bound to be a few clouds among the silver linings, and the question of if Meghan Markle will still act following the news of her engagement is one of the biggest. We already know that the star will be departing Suits after Season 7, where she's played the character Rachel Zane since 2011. And while that news is hard to stomach, it had already been decided prior to the announcement of Markle's engagement to Prince Harry on Monday, Nov. 27.

But what about other projects? Will the actor be able to maintain her career as well as the responsibilities of a British royal? No official announcement has been made, but it does seem unlikely that the 36-year old will be able to juggle both. For one thing, it's a pattern that we've already seen followed by Kate Middleton, who quit her job at her family's party supply company in 2011 in advance of her wedding.

And for another thing, the engagement announcement from Clarence House already stated that the couple will reside in London, specifically in Nottingham Cottage, where Prince Harry has resided for the past four years. That puts Markle full time zones away from the entertainment hubs of New York City and Los Angeles, where she'd likely need to be to film any future projects. In their first interview as a couple, the actor and her royal fiancé shared how difficult it was to coordinate their schedules around Markle's long workdays on set and Prince Harry's commitments.

And even if a show or a movie could be more flexible with location, the reality of a British royal working on an active film set just isn't feasible.

In the same interview, Markle expressed excitement for her new life as a royal, describing this time as "a transition out of my career and into the [new] role." (In her case, most likely as the Duchess of Sussex.) She shared that she's excited to be a teammate and a partner to Prince Harry, and for the platform that comes with that, adding, "The causes that have been very important to me, I can focus even more energy on." In short, she'll be bringing the same zeal that she's brought to the character of Rachel Zane to philanthropy and the goal of making the world a better place.

And anyone who's watched Suits knows that she has a lot of zeal to offer. So while the show and its fans will be sad to miss her, it sounds like a fitting transition for the talented actor. And it won't come out of nowhere, either. A full two weeks before the engagement was officially announced on Nov. 27, Us Weekly had reported that Season 7 would be 36-year-old's last. And her departure will actually coincide with that of her on-screen flame, Patrick J. Adams, which has been in the works for a while now, according to the magazine's source.

"He was always leaving the show. He made his mind up a while ago. Patrick wants to pursue other things and he’s realized his time at Suits has come to an end."

The outlet promises there will still be two seasons of the show, and hints that art might imitate life when it comes to Markle's departure, a parallel that Adams poked fun at in his tweet congratulating his costar.

Us Weekly's source claims there will be a wedding between the fan favorite duo of Mike and Rachel in the show's seventh season that they hope "will make it an easy break for Meghan to leave as well."

Well, we're not sure if "easy" is the right word, because losing Rachel will be tough, but it's for a great reason, so we wish her all the best.