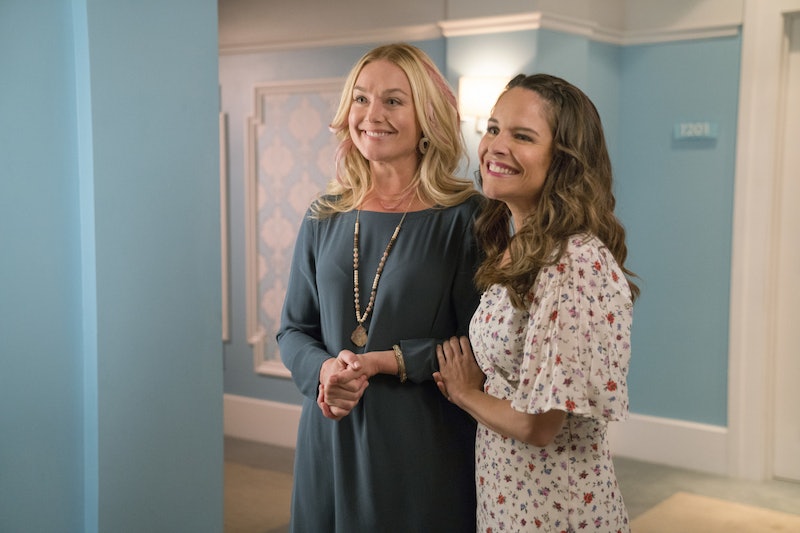 While a lot of crazy things happen to the characters on Jane the Virgin, there has been one constant throughout the entire series — that Sin Rostro is involved when bad things occur. Among many other things, Rose has been responsible for killing Emilio Solano, kidnapping Mateo, and shooting Michael. Yet, her weakness for Luisa has always been her downfall and after Rose is arrested on Jane the Virgin during "Chapter 63," she may finally go to jail. But what's Jane the Virgin without Sin Rostro? Well, if Rose does end up locked up, The CW series will just need to find another baddie.

Ever since Rafael and Petra found out that Chuck had seen Luisa's girlfriend Eileen on the beach the night that Scott died, Rafael has been trying to get Luisa to return to the Marbella. In the May 15 episode, he cruelly uses his cancer to lure her — and Eileen — back to the hotel, and it works. Yet, though Rafael knows that Rose is somehow involved, even he couldn't have figured out that Eileen is really Rose in disguise. (Actually, he didn't realize that Anezka was pretending to be Petra, so he's not so great with disguises.) Thankfully, Dennis notices Eileen's mask right as the police arrest her and he pulls it off — making for a dramatic reveal that Eileen has been Sin Rostro this whole time, just like how she was Susanna the whole time in Season 2.

Although it's still not clear if Rose is responsible for Scott's murder, that won't really matter once police have her in custody, since she is wanted for so many other crimes. And while Rose has been able to get out of many a sticky situation before, it doesn't seem like luck will be on her side this time. If she didn't murder Scott, she may be able to name Scott's real killer, but that won't be nearly enough for her to strike a deal with the police. Yet, as I mentioned at the beginning of this article, Rose and her evilness is a constant, lurking threat for Jane, so could Jane the Virgin really place Rose in jail? If the show went that route — and didn't have her escape — then a new evil presence would need to emerge quickly for the series to keep with its criminal drama aspect.

If Rose is arrested and kept in jail, my money is on Luisa to possibly turn bad. While Luisa is usually more amusing in her antics since she doesn't have evil intent, she goes to extremes when it comes to Rose. And she is bound to feel horribly betrayed since Rafael obviously was working with the police and he lied to her about something as serious as having cancer again to trick her into returning to the Marbella. If somehow Luisa doesn't also end up in jail for hiding Rose's identity, she may be out for revenge and though I don't anticipate that Luisa will ever be as competent as a criminal as Rose is, she has proven over the years that she is more than capable of causing some destruction.