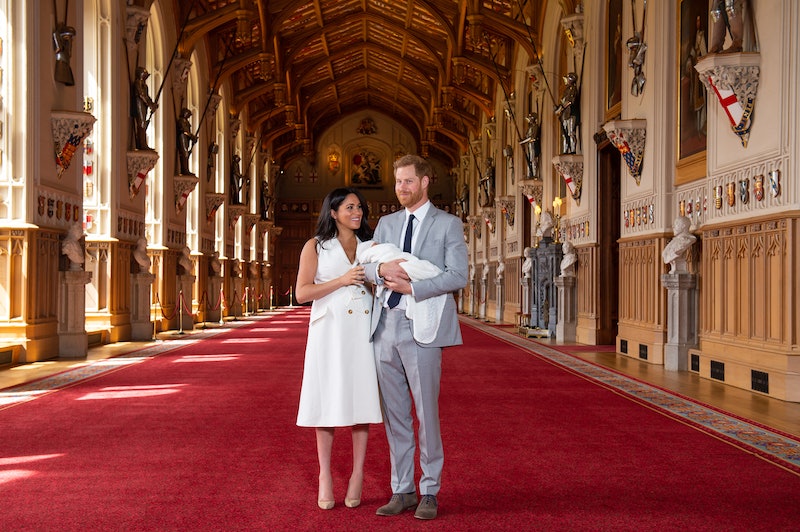 One of the newest additions to the British royal family is Archie Mountbatten-Windsor. And I don't know if you know this, but he's half-American. Unless something drastic changes, Archie will be raised in the U.K., which means he could miss out on some things his mom used to do in the U.S. Like, celebrating Independence Day. Still, Archie could end up celebrating the Fourth of July as he grows up for one major reason.

Nope, it's not that Meghan Markle has big plans to bring the holiday to the literal crown it represents leaving. It's just that she really likes celebrating things.

In addition to being an actor, before Markle got her duchess on, she wrote a lifestyle blog called The Tig. The site was full of recipes, gift guides, hosting tips, and all sorts of things about celebrating holidays. Markle has already shown she's keeping her interests alive in her new role, through her patronages and her work with the Hubb Community Kitchen. Also, remember that time she baked banana bread while on her royal tour in Australia? She genuinely loves cooking and baking.

So, it would make sense then that Markle would still want to do something for the Fourth of July, if only so she can use it as an excuse to make food. The Tig is no longer available, but some of the archives are available on other sites, and this includes some of the recipes.

One dish that looks particularly good for the Fourth of July is a Ginger Berry Crumble, which features blueberries and blackberries baked with a crumbly topping. Markle also posted about a Signature Tig Cup, which is her take on a Pimm's Cup. It looks refreshing for a hot July day and also is very English. (Although her recipe doesn't actually contain Pimm's, which could be a point of contention.)

In the description for the Tig Cup, Markle described her perfect summer day, which could give us a clue as to how she and her family might spend the Fourth of July. (Well, maybe not this Fourth since Archie will still be infant):

Sun kissed afternoons, cocktail in hand, surrounded by nothing but the laughter of your closest mates, an Otis Redding playlist, and the whistling breeze of the wind. I’m talking about perfection, people. The perfection that comes with summertime. Picnics and barbecues, laying out by the pool with friends, and toasting to the season are high on my list.

She also pointed out in the five-year-old post that she's an Anglophile:

Having a love of all things Brit, I wanted to do a twist on their signature Pimm’s Cup.

Markle also wrote a post specifically about the Fourth of July in July 2014 titled "Musings on Independence":

Raise a glass to yourself today — to the right to freedom, to the empowerment of the women (and men) who struggle to have it, and to knowing, embracing, honoring, educating and loving yourself. On this day, and beyond, celebrate your independence.

She ended the post with a quote from feminist author Chimamanda Ngozi Adichie's TED Talk.

Maybe eventually Markle will share how she continues to keep up American traditions while living in the U.K. with her family and being a duchess. But, for now, one just has to assume she'll celebrate Fourth of Julys to come by cooking up a festive meal and teaching Archie about feminism.