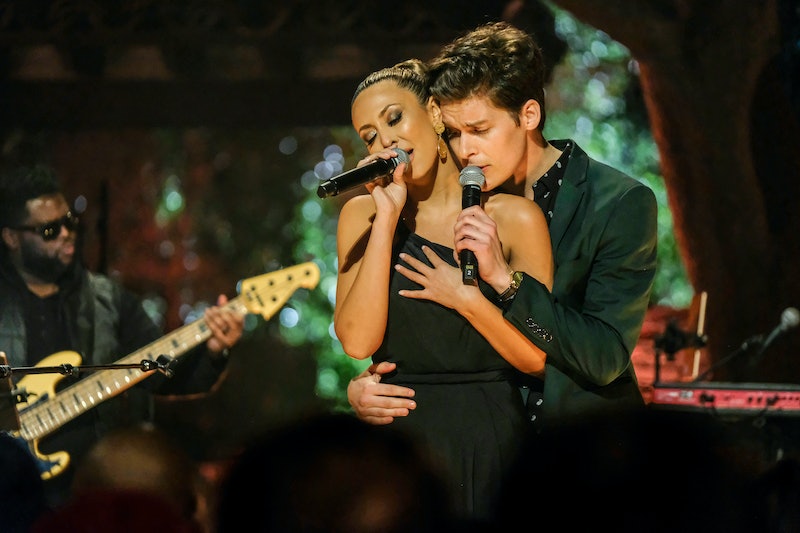 The Bachelor spinoff Listen To Your Heart may be a show about finding love, but it's also about music and finding the right musical partner to help advance your career. To that end, Chris Harrison finally announced the details of the prize during Monday night's episode, revealing that the winners of Bachelor: Listen To Your Heart will go on tour together after they're given the chance to write and record their own original songs. At least, that was the original plan when they were shooting. But considering the country is currently in the middle of a national health emergency in wake of the coronavirus outbreak, going on tour isn't exactly possible right now. So what does that mean for the winners going forward?

As of now, it's unclear how the Listen To Your Heart tour might be impacted by coronavirus. Bustle reached out to ABC for comment on whether the tour will be delayed or canceled altogether, but did not receive an immediate response. A delay seems more than likely, given that all national tours and big performances in general have essentially been put on pause world-wide. But since we don't know how long the virus will last, it could still be quite some time before you get to see the final two contestants perform in person, which might cause the show to lose steam and, eventually, cause the tour to be canceled altogether.

The subject of the big prize was broached shortly into Monday's episode on April 27 when Harrison explained to the remaining contestants that the judges would be deciding who stays on the show and who's sent home from here on out. Their decisions will be based not only on the pairs' musical performances, but also on their chemistry together and commitment to one another. The final two left standing will then get to work with a notable producer, who will work with them to create original songs and ultimately lead to them going on tour.

This echoes similar remarks Harrison has made about the mystery prize in the past. "The goal of this is a couple to find true love, but then also have this amazing duet that will earn this prize package that we put together," he teased while speaking to Parade. "I won’t reveal everything that’s in this prize package. But it is to go out and perform, record music and to become a real duet, a professional singing duet."

It's an exciting opportunity, but one that might not be able to come to fruition as soon as they would like. According to Reality Steve, ABC shot the Listen to Your Heart finale around Valentine's Day, several weeks before the pandemic became widespread in the United States. That means that the rest of the season will play out as planned, by the time America learns who was the last couple standing, the promised prize might have to be changed just a little.

Obviously, the winners themselves can't come out and explain anything right now since that would prove to be a major spoiler. So, unfortunately all we can do for the time being is sit back and wait until Harrison chooses to let us know.