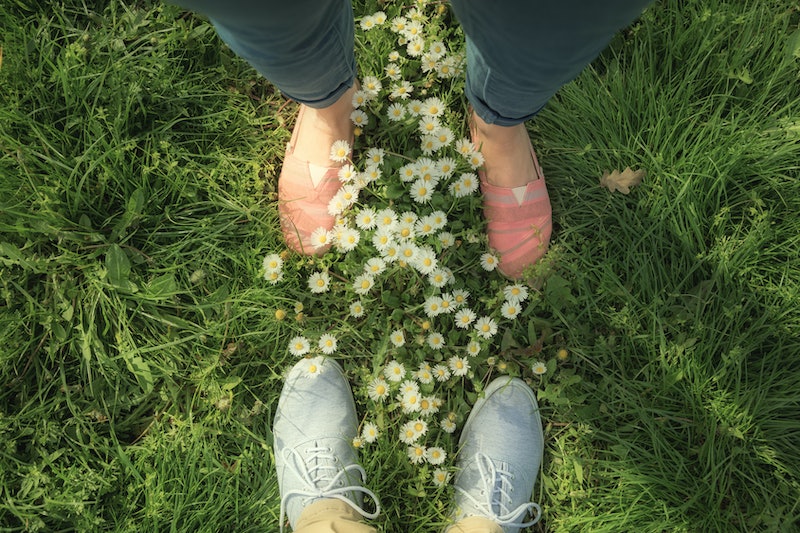 I had never heard of the cuffing season until this year. Maybe I'm just that uncool, maybe everyone just started using the term, or maybe I just never noticed it happening. But last fall, I feel like everyone started talking about "cuffing season"— the season right as winter sets in, when people want to get into relationships just for the winter. So they start dating someone to cuddle up with in the cold. But what happens when spring hits? Will the relationship see April?

“Despite some of the conventional beliefs, there’s no biological basis for why we try to get cuffed in the Winter months,” Clarissa Silva, behavioral scientist and author of the relationship blog, You’re Just A Dumbass, tells Bustle. “Unlike other species, humans don’t have set or seasonal mating patterns. But there are practical reasons why some cuff. It’s a lot colder, and people are attending fewer events and staying indoors more than warmer months — so it limits people’s dating and sex pools. This also makes people think that we have a mating pattern and strong desire to cuddle up in the Winter months."

So what if you started dating someone this winter? How do you know if your winter relationship will make it to spring? Well, spring is right around the corner. It's time to think about why you got into that relationship and how it's faring.

Who knew? We're right in the middle of breakup season. I think of spring as being young love's blossom time, but apparently it's a time of heartbreak. Data from British journalist and graphic designer David McCandless, who looked at 10,000 Facebook statuses to find out when we break up, found that there was a huge jump in breakups the month of March. A spring cleaning, if you will. Maybe it's related to cuffing season— and relationships that aren't meant to last reaching their natural conclusion. But in any case, relationships are more likely to end this month.

But It's Also Time For New Love

I wasn't wrong about young love! In fact, statistics from the dating site Zoosk show that 34 percent more first messages are sent daily in the spring. Because of the breakups, perhaps? Or just people generally feeling like a fresh start? But if you started dating someone in the winter, it seems like people do a lot of soul searching and do-overs in the spring. So if something's not quite right, you may be more likely to be headed for a breakup now than other times of the year.

But that's not necessarily a bad thing. Maybe you did just have a winter fling for companionship — there's nothing wrong with that! But there is something wrong with staying in a relationship that's not meant to last just because you've spent a few months together.

“This is a psychological phenomenon called ‘the sunk cost fallacy,’” Life Coach Sara Oliveri tells Bustle. “Basically what it boils down to is that the more we invest in something, the less likely we are to abandon it. We believe we are making a rational decision about the future value of something, but instead we are making an emotional decision based on what we have already invested. However, the problem with this emotional reasoning is that by refusing the experience loss now, we incur even greater loss in the long run.” And there's no shame in admitting a relationship has run its course or isn't for the long haul. You had some fun, you stayed warm, what's wrong with that?

So will your winter relationship make it to spring? Well, despite all the statistics, if you got into a strong, heathy relationship (that just happened to start in the winter) there's no reason for it to break down in the spring. But if you were just cuffing, whether or not you realized it, it may be the perfect time for a fresh start.

More like this
35 Sexy Texts To Send Your Partner
By Griffin Wynne and Carolyn Steber
How Getting An Abortion Has Changed From The ’60s Through Today
By Amanda Chatel
What’s An Open Relationship, Actually?
By Lexi Inks
Justin & Hailey Bieber's Bond Is "Unbreakable" Amid His Ramsay Hunt Diagnosis
By Bustle Editors
Get Even More From Bustle — Sign Up For The Newsletter