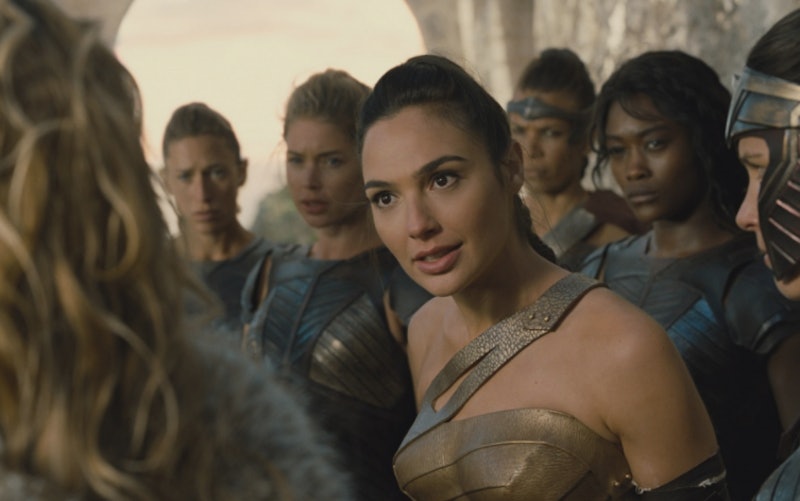 As both a woman and a longtime fan of superhero movies, the success of Wonder Woman at the box office has made me happier than I can express. But as a black woman and a longtime fan of superhero movies, the actual content of Wonder Woman depressed me. Racking up $200 million worldwide on its first weekend, Wonder Woman's status as a superhero film starring a woman and directed by a woman has made it a feminist victory in ways having nothing to do with the all-female island of Themyscira and the inclusion of lines like "Be careful in the world of men, Diana. They do not deserve you." But I'm sorry to say that Wonder Woman is just a white feminist victory — barely. For black feminists, it's exactly like every other superhero movie, just with a white female lead.

By my count, there were four lines spoken by black women in the entire two-and-a-half-hour runtime of Wonder Woman — and one of those lines was just the repetition of "Diana!" by her black caretaker. In fact, all of those lines were spoken by black Amazons who were, of course, subservient to Diana and her all-white ruling family. (And of course Diana's black sister Nubia, who in the comics was kidnapped and raised by Ares to later oppose her, was not put in the movie.) Once Diana leaves Themyscira, the very appearance of black women drops down to none. It was such a radical change that I found myself combing through the background of scenes as she walked through the streets of London with Steve Trevor, desperate to catch sight of even one black face, if not at least one black woman's face.

But even the crowds of Wonder Woman were overwhelmingly white.

Thus, the film quietly played into the same misconception that black people didn't exist in history; you know, that old excuse that the casts of period dramas are all-white because people of color apparently only existed in times of slavery or civil rights movements, and to have them anywhere else would be unrealistic. (For the record, not only were port cities like London filled with black immigrants during World War I, but black soldiers fought in the war — for Britain and Germany. Wonder Woman included some soldiers of color, which made the overwhelming whiteness of the civilian crowd scenes that much more unforgivable.)

Once I noticed the lack of people of color in this world of men, it was hard not to notice the other ways that Wonder Woman fell short of being a true feminist victory. After leaving her island, aside from a few short scenes with Steve Trevor's secretary Etta Candy, Diana spends little to no time in the company of other women. That means that the second half of the film gives as much screen time and focus to men — Steve, Chief, Sameer, Ludendorff, Ares — as it does to women. I wonder, if we counted the lines spoken by women versus men in Wonder Woman, would women win out by very much? Would women win at all?

Yes, having her surrounded by men did emphasize Diana's disinterest in gender stereotypes and social constructs, and it contrasts the values she'd been raised with against the values of the men around her. But the lack of other women fighting in their own way for the war effort — be that the women who dressed as men to serve in World War I or the female nurses that helped the injured and dying on the front lines — gave Diana's adventure a "not like other women" theme. As a character, Wonder Woman believes in nothing but supporting and lifting up other women, but when other women, especially other women of color, are eliminated from the majority of her first film, the movie loses the message that "Women can do everything men can, see?" and replaces it with "This white woman can do everything men can, see?"

And Wonder Woman failed the LGBTQ feminists as well. Sure, it was said from the start that the movie would not explore Diana's comics canon bisexuality, with actor Gal Gadot telling Yahoo in October 2016, "That’s an option — but we never experienced that." However, early into the film, Wonder Woman appears to reinforce the harmful "bury your gays" trope, which gives the LGBTQ community rare representation on-screen, only for the character in question to be killed off. The blink-and-you-miss-it moment happens when Diana's aunt, Antiope (Robin Wright), is killed in the battle against the German soldiers on the beach. In addition to Diana and her mother Hippolyta's reactions, the Amazon Menalippe screams out her own anguish and runs to Antiope's side — a move that loosely implied the two were lovers. Did I mention this implication came up only once Antiope was dying?

The most disappointing part of Wonder Woman was that it would have been so easy to film a movie that considered all of these intersectional issues and made the effort to avoid these criticisms. More extras of color could have been cast to show Diana a diverse world that reflected the diverse world of the Amazons. Diana could have happened across a female soldier-in-hiding who was inspired by her, or been shown to feel at home around the female nurses at the front lines because this is what she grew up with: women doing everything. Just imagine how much more amazing that No Man's Land scene would have been if Diana climbed out of the trenches with an army of human women, denied the right to fight until now, streaming out after her like the Amazons did on that beach.

There was even a moment that would have been a perfect way to work in Wonder Woman's bisexuality. When Diana and Steve Trevor kissed for the first time, it was clear from the way that she handled the kiss that she had done it before. We know she came from an all-female island. Why not throw in a line of either of them acknowledging her practical experience when it comes to kissing? Would such a line actually have detracted from that scene in any way?

Sadly, all of these opportunities were missed, and instead we got a movie that was as white and heteronormative as every other superhero movie we've seen. So yes, Wonder Woman is a great victory for women. Yes, it's a historic landmark that a superhero movie starring a woman and directed by a woman blew up at the box office the way we all knew films like this could. And yes, I hope that Wonder Woman opens the door for more women-led films with female directors at the helm.

But no, Wonder Woman wasn't a great victory for all women. And we're doing all women a disservice by pretending that it was.

Why Women Are Crying During 'Wonder Woman' Fight Scenes

'Wonder Woman' Is The Best DC Comics Movie In Years