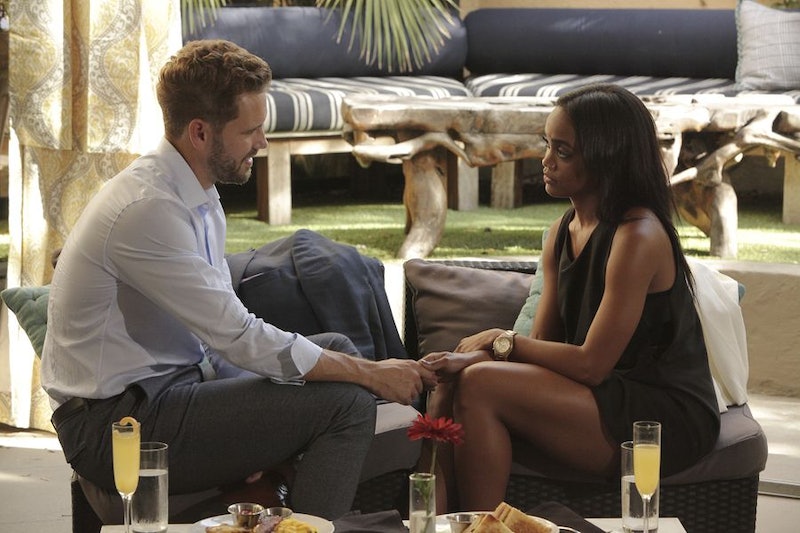 Hi there, it's me again, here to ask those important questions like, why hasn't Nick Viall acknowledged Rachel Lindsay's season of The Bachelorette? The two met on Season 21 of The Bachelor, where Rachel made it all the way to Fantasy Suites in Finland before being sent home. But although the Dallas-based attorney professed her love for the software salesman, and the two shared multiple makeout sessions, their connection seems to have cooled. When Nick and Rachel parted, it was with mutual respect and admiration, so I was expecting Nick to be one of her biggest cheerleaders. But with Rachel's own season of The Bachelorette currently underway, that's seemed far from the case.

"Nick has commented about Rachel several times in past interviews and social media posts – just hasn’t mentioned her in recent social media posts because he is extremely focused on his new company THE POLISHED GENT and his relationship with Vanessa.

Nick totally supports Rachel and her season and thinks she will make a great lead."

Earlier: Weirdly, Nick has been silent on social media when it comes to Season 13 of The Bachelorette. At the time of this post, we're two episodes in and still no peep from the Bachelor Nation veteran. Is it because he's burned out on the franchise after four separate forays? Or did something go down behind-the-scenes? Whatever the cause, Nick's silence is starting to raise some eyebrows. (In this case, specifically mine.) Bustle reached out to Nick's rep for comment, but did not receive an immediate response.

Because, here's the thing: I can understand when Bachelor Nation couples don't want to rewatch their own season. Nobody wants a reminder of all the people your betrothed smooched on their way to you. But Rachel's season doesn't present that issue for Nick. Or it shouldn't — he's been engaged since the finale, and according to Rachel herself, so is she. With both parties in what fans can presume are happy relationships, what's the problem? Would one quippy tweet about what a weirdo Whaboom is be too much to ask?

When Rachel was first named the Bachelorette, Nick was both enthusiastic and vocal on social media. In February, he congratulated his former flame with two effusive tweets.

It's the kind of move that had me anticipating more tweets down the line. I was imagining a supportive, encouraging atmosphere, maybe with some good-natured ribbing back and forth. But instead — crickets. Nick's last tweet mentioning the current Bachelorette was after Hometowns, when fans wondered why Nick hadn't met up with Rachel's father, Mr. Lindsay.

He answered that question readily, but never tweeted about her since. This honestly makes no sense to me. Because what's the downside to, in the very least, acknowledging Rachel's season? It really didn't seem like the pair left things on bad terms. Nick had nothing but respect for the attorney; his heart was just somewhere else. That's about as maturely as a relationship can end on this franchise.

Since the show, Nick and Vanessa have spent quite a bit of time on the defensive about their relationship. It sucks, but do you know one way to get people to stop talking about you? Give them something else to focus on. Change the conversation. Make people talk about how mature you are for wishing Rachel luck. Or how cool it is that you two are still so supportive of each other in a platonic way. Just spit-balling here.

After all, it's not as if Nick's social media is devoid of these kinds of posts. He's proven that he doesn't have a problem endorsing other shows, like FOX's Love Connection, or his run on Dancing with the Stars.

He's even thrown some support the way of a fellow former Bachelor, retweeting a post by Ben Higgins promoting his blog.

And it doesn't seem to have been a problem in the past for Nick to have connections with former flames. He also retweeted Andi Dorfman on Feb. 20 after she appeared on The Bachelor.

To be fair, Rachel never tweeted about Nick's time on DWTS either, but that's a show she's never been on. Bachelor Nation is a franchise that the two have in common, and it's almost weirder that Nick hasn't said something. So, what is it? What's keeping Nick so busy right now that he can't tweet one little thing about Rachel's season? Even just a "good luck" or a "tune in" would put my mind at ease.

Throw us a bone here, buddy. This franchise is pretty much your bread and butter, so give Rachel some much-deserved love.