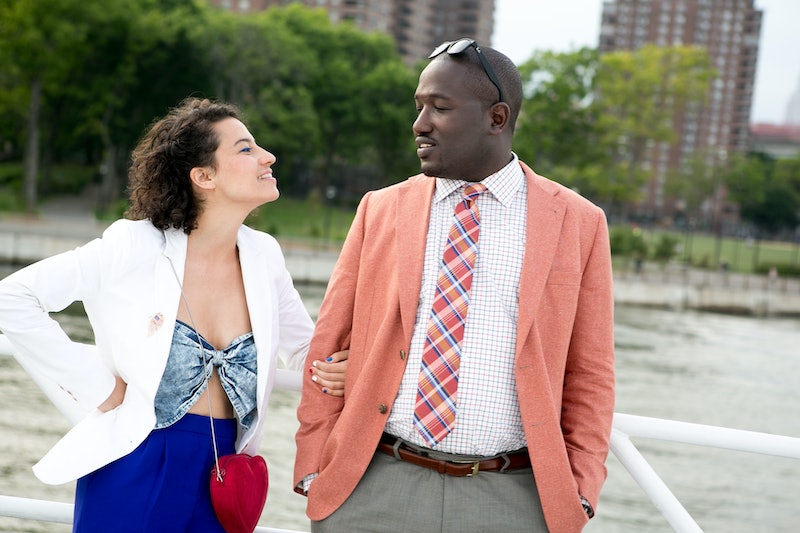 Even though I’ve had crushes on both women and men since childhood, it’s only been in the past few years that I’ve started to identify as bisexual. (I also use the term "queer" sometimes.) I was a sexual late bloomer anyway, and for a number of other reasons, it took me awhile to realize that my sexuality is more fluid than I thought. But even after that happened, it was a long time before I felt like I could write about bisexuality. (And I write about everything.)

It's honestly still kind of weird for me; I mean, I don't have my sexuality 100 percent figured out, and it's possible that I never will. Representation is important, though; and I’m in an excellent position to represent. And I wanted to draw some attention to a few recent studies about bisexual women. Most of the available studies focusing on bisexual women are either heartbreaking, illuminating, or both — and I don't think enough people are talking about them.

Back in 2013, one study found that 15 percent of people didn’t even believe bisexuality was real. This was in spite of the fact that a CDC study released earlier that same year revealed that bisexual women are more likely to experience sexual assault and intimate partner violence than women who aren’t bisexual. Two years after that, researchers from the University of Notre Dame discovered that women are more likely to be bisexual than men. Despite this, bisexual women still deal with stigma over their sexual orientation. As if all of this isn't enough reason for people to write about bisexuality, research suggests that bisexual women are more susceptible to mental illness than other women.

Here's just five things recent studies can tell us about bisexual women and the lives they lead.

Women Are More Likely To Be Bisexual Than Men

As The Advocate reported in August of 2015, women are "three times more likely than men to report a shift in their sexual orientation over time, and more likely to self-identify as bisexual." These findings were the result of University of Notre Dame study which used data from the National Longitudinal Study of Adolescent to Adult Health — and that study followed the sexual activity of more than 5,000 women and 4,000 men as they aged. Study participants were asked questions about their sexuality (including levels of same-sex attraction, sexual activity, etc.) at the ages of 16, 22, and 28 years old.

Researchers discovered that women are more likely to be bisexual than men. As Aura McClintock, assistant professor of sociology at Notre Dame explained it: "Women have a greater probability than men of being attracted to both men and women, which gives them greater flexibility in partner choice.”

It turns out most bisexual women end up in relationships with men anyway, though. Which brings us to...

Bisexual women often are in relationships with men

According to a Pew Research Center survey of LGBT Americans which was released in 2013, a whopping 84 percent of self-identified bisexual people (both men and women) end up in relationships that appear heterosexual. Conversely, that same survey found that nine percent of self-identified bisexual people are in same-sex relationships.

Bisexual women already face a slate of unique risks just for being bisexual, including everything from fear of familial rejection to concerns over personal safety, so it's not difficult to understand why bisexual women are often primarily involved in relationships that appear heterosexual. On top of that, finding women who are openly down to date women isn't as easy as finding men who date women, because there's just not as many of us. As one Gallup poll discovered back in 2015, less than five percent of Americans self-identify as being anywhere on the LGBTQ spectrum.

In 2010, the Center for Disease Control (CDC) conducted the first-ever nationwide study to determine domestic violence rates by self-identified sexual orientation. The results, which weren't released until 2013, were (and still are) particularly disconcerting for bisexual women.

Over 9,000 women were interviewed for the study — 96.5 percent of them identified as straight, 2.2 percent as bisexual, and 1.3 percent as lesbian. Sadly, researchers discovered that 61.1 percent of bisexual participants had experienced physical violence, stalking, or rape at the hands of a partner. Further, 89.5 of those bisexual women said they'd only been subjected to this kind of violence by male partners.

Comparatively, 35 percent of straight women and 43.8 percent of lesbian women reported experiencing stalking, physical violence, or rape by an intimate partner. Obviously, this is also unsettling as hell — women of all sexual orientations are likely to experience intimate partner violence, and that's really messed up.

Earlier this year, The Daily Beast reported that bisexual women are at higher risk for depression and suicide than straight and lesbian women. These findings were the result of a study conducted by researchers at Drexel University and published in the Journal of Adolescent Heatlh . Researchers analyzed data from a survey distributed by primary care physicians to 2,500 young people ages 14 to 24, dividing participant's responses by sexual orientation and measuring factors like depression, anxiety, substance use, and suicidal thoughts.

Ultimately, the study found that bisexual and questioning women struggle the most with mental health. As The Daily Beast put it: "Bisexual women in Shearer’s study reported significantly higher current suicide scores than any other orientation, lesbians included. Women who were unsure about their sexual orientation also reported more depression and anxiety than straight women."

While it's true that everything from your genetics to what you eat can affect your mental health, for bisexual women, there seems to be a link between sexual orientation and mental illness. Bisexual people deal with unique stressors and stereotypes — like the stubborn misconception that bisexuality is "just a phase" and the idea that all bisexual people are promiscuous. Further, bisexual people are often marginalized by people within the LGBT community — a fact which can leave us feeling isolated. Combine all of this together and it's not surprising that bisexual women are more likely to become depressed.

Bisexual Women Smoke The Most Weed

It is a real fact: bisexual women smoke more weed than all other women. It's been this way for awhile, too. In fact, the 2000 National Alcohol Survey revealed that nearly 38 percent of bisexual women reported marijuana use in the past year, but only five percent of straight women and about 20 percent of lesbians said the same. More recently, a representative study of U.S. college students found that bisexual women were three times more likely to have used marijuana than women of any other sexual orientation.

As a bisexual marijuana enthusiast myself, I can't help but feel a sense of pride and community about all of this. (Fellow bisexual babes: The next time I fire up my vape, I'll be thinking of you.) However, the reasons bisexual women smoke more pot than other women are kind of heartbreaking. As Dr. Margaret Robinson, a research scientist at the Ontario HIV Treatment Network, told The Daily Beast last year: "bisexual women are exposed to sexism as well as biphobia and homophobia. It could be something about the anxiety we feel living at the intersection of multiple oppressions that instigates such elevated use of cannabis." Robinson came to this major bummer of a conclusion after conducting a series of one-on-one interviews with bisexual women in Toronto, and her findings can be found in the journal Psychology of Sexual Orientation and Gender Diversity.

Not all the information documented in these studies is uplifting. But all of it is important for us to know and understand — especially if we're going to work to make a world that accepts bisexual women for who they are.

Editor's note: This story was updated from its original version on June 5, 2018.