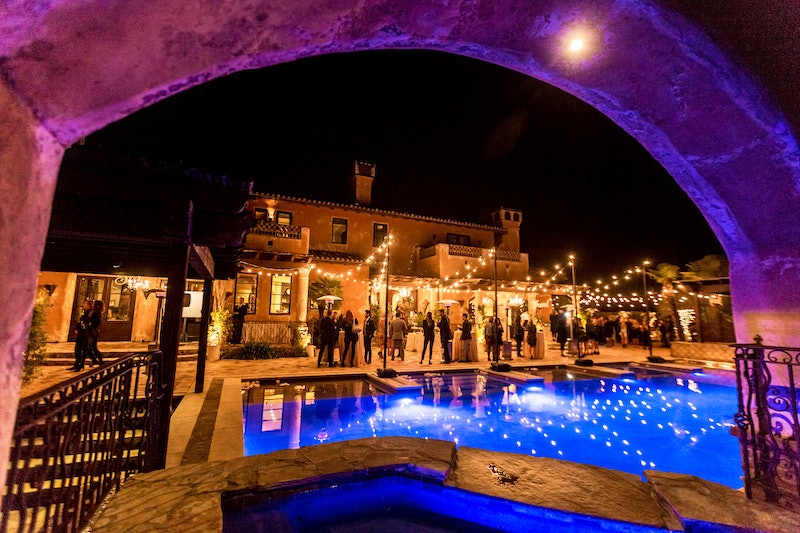 Calling Bachelor Nation: You can now book The Bachelor mansion for weddings. But wait, there’s more: Bachelor host Chris Harrison himself is available to officiate the ceremony. As per Harrison’s official website, the famed Villa de la Vina can now be rented for weddings, corporate conferences, seminars, team building workshops, and more. Situated within the picturesque Santa Monica Mountains of Malibu, the extravagant mansion is best known as the backdrop of the ABC reality dating series. With 10,000 square feet of interior space and 20,000 square feet of exterior space, it’s an ideal location for Bachelor fans to exchange their “I do’s” — or, perhaps, book a team outing for the office.

To hire Harrison to officiate their wedding, fans need to fill out a form on his website with the following information: contact information, wedding date, wedding venue, and details of the wedding. As his website notes, Harrison has been an ordained minister since 2012 with Universal Life Church. Available for U.S. (yes, that includes Hawaii) and international destination weddings, Harrison “customizes each of his weddings to the couple,” as per his website.

Harrison’s ordained minister status is the real deal. The Bachelor host recently officiated Bachelor in Paradise stars Chris Randone and Krystal Nielson’s intimate wedding ceremony in Mexico in June. A few months prior in January, he officiated Bachelor’s Arie Luyendyk Jr. and Lauren Burnham’s ceremony in Hawaii. On Instagram at the time, Harrison shared a series of photos with the couple and wrote, “It was an incredible wedding week. My blessings and prayers to Mr & Mrs Luyendyk and baby Luyendyk on the way.”

The news of the famed mansion’s wedding availability comes a few weeks before the Bachelor’s Season 24 premiere on Jan. 6. Pilot Peter Weber will soon woo contestants on the hit ABC show after he injured his face in Costa Rica in October. The incident reportedly happened while he was filming the series. Harrison issued a statement on Instagram shortly after about the “freak accident” and assured fans that Weber was “100% OK” and that “production is already back underway.” Harrison wrote, “He’s still the dashing, handsome pilot we’ve all dreamed of.”

As for what’s to come, Bachelor alum Hannah Brown will return fresh off her Dancing With the Stars win to host a group date in the season premiere. In a teaser clip shared on Dec. 9, fans get a glimpse of Brown and Weber’s reunion since his departure from Brown's Season 15 of Bachelorette.