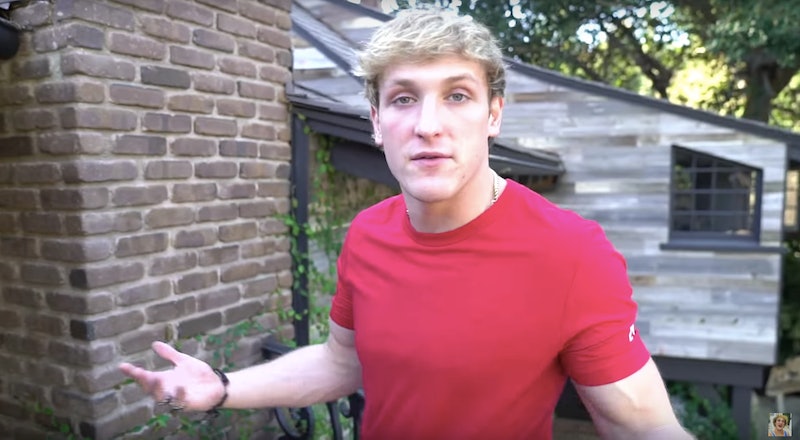 It has been over a month since YouTuber Logan Paul posted a video that appeared to show a dead body in Japan's Aokigahara Forest, or "suicide forest," on Dec. 31, but he's still making headlines for creating controversial content. In the aftermath of Paul posting a video on Thursday where he tasered two dead rats and was subsequently called out by People for the Ethical Treatment of Animals, YouTube has announced that it has "temporarily suspended" ads on Paul Logan's YouTube account, according to The Verge and confirmed in an email to Bustle.

A YouTube spokesperson issued a statement to Bustle on the decision to suspend ads, explaining, “After careful consideration, we have decided to temporarily suspend ads on Logan Paul’s YouTube channels. This is not a decision we made lightly, however, we believe he has exhibited a pattern of behavior in his videos that makes his channel not only unsuitable for advertisers but also potentially damaging to the broader creator community.”

The platform also announced the decision to suspend ads on Paul's account on the YouTube Creators Twitter account, with the statement, "In response to Logan Paul’s recent pattern of behavior, we’ve temporarily suspended ads on his channels."

While Paul has had a reputation for creating controversial content in the last few years, the aftermath of his video filmed in Japan has caused quite the stir. Following the video, Paul issued both a written apology and a video apology on Twitter, saying he was taking a break from vlogging. The video was widely criticized when users pointed out that it was still monetized; according to a SocialBlade report, Paul made an estimated $12,000 to $97,000 on the apology. Paul responded by demonetizing the video.

On Jan. 24, he emerged from the hiatus with a video titled "Suicide: Be Here Tomorrow," speaking to people with depression with the purpose of raising mental health awareness; in the video, he also pledged $1 million to the cause of suicide prevention.

On Feb. 4, Logan Paul reemerged with a video titled "LOGAN PAUL IS BACK!" It is here that the controversy continued — he teases a "comeback," engages in a fake fight, and says at one point in the video, "Yo, hold up — 'disgraced'? Whatchu mean 'disgraced,' boy? I took a break. Besides, I'm still lit as f*ck. What other YouTuber you know can take a three-week break and still gain a million subscribers?" This, too, prompted a backlash on Twitter from people concerned that Paul was yet again profiting from the mishandling of a very serious issue.

That same day, Paul posted tweets about eating Tide Pods. Paul notes in his Feb. 4 video that he is unfazed by critics: "Everything I do from this point on will be criticized. I'm a very polarizing person. ... My supporters are a special kind of person who function on a different wavelength to everybody else."

On Feb. 5, Paul posted another video that involves both a dead fish and two dead rats. In the video, he jokingly asks if he should perform CPR on the fish, and tasers the two dead rats. Senior Vice President of PETA Lisa Lange issued a response to the video to TMZ, saying, "This sort of content has no place on YouTube or anywhere else, as it could desensitize young people to cruelty to animals. PETA is calling on the platform to remove it."

As of Friday, the video is still on the platform; however, according to YouTube, Paul's tasering of a dead rat is a contributing factor to the "recent pattern of behavior" that prompted a suspension of ads on his account, as well as his (now deleted) tweet about eating Tide Pods, which read, "swallowing 1 tide pod per retweet." YouTube is also looking into "further consequences" for Paul, according to The Verge. In the meantime, Paul has continued to vlog, posting three new videos since.