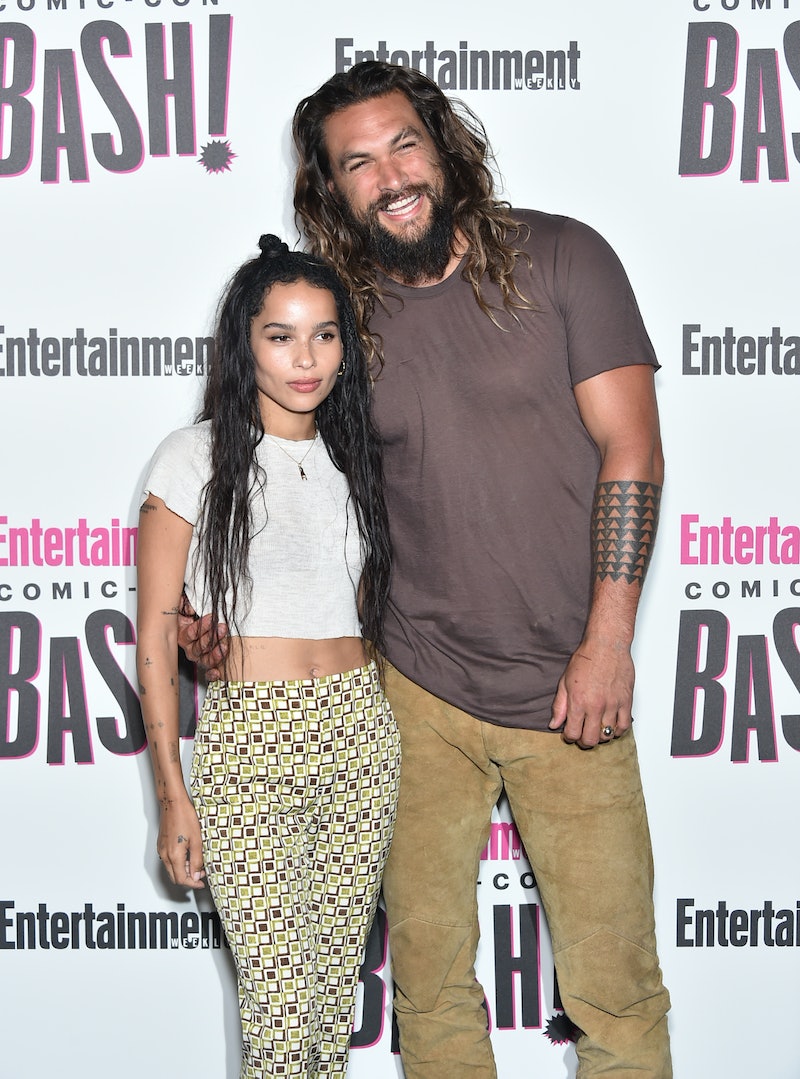 The cat's officially out of the bag, Zoë Kravitz is the new Catwoman. And Kravitz's comment on her Catwoman casting teases a DC crossover with her stepdad Jason Momoa, who couldn't be prouder. In fact, his very public congratulations got Kravitz to officially respond to the casting news for the first time.

When the news broke on Monday, Oct. 14, that Kravitz will play Catwoman in the upcoming The Batman starring Robert Pattinson, the actor didn't release any official statement. Though representatives for Kravitz and Warner Bros. confirmed the casting to Bustle. But, luckily, Aquaman star Momoa couldn't contain his excitement. He turned to Instagram to congratulate the actor on the new role. "I’m so proud of u zozo bear," wrote Momoa, who is married to Kravitz's mom Lisa Bonet. "On and off screen."

For Momoa, though, the most exciting part of Kravitz's Batman casting was the fact that his two children, Lola and Nakoa-Wolf's, big sis is officially a superhero. "Unbelievable so freaking stoked," he wrote. "Your [sic] going to have so much fun."

Momoa's kind words led the newly married star to pop into his comments with a sweet message of her own. "LOVE YOU PAPABEAR!" Kravitz wrote. "Love that Aquaman and Catwomen [sic] spend the holidays together from now on."

Soon, though, Kravitz's Catwoman, will be spending some time with Pattinson's Bruce Wayne, a.k.a. the Batman. Not much is known about Kravitz's Catwoman beyond the fact that she will be inspired by the comics' Selina Kyle, the cat burglar who becomes Batman's foe and sometime love interest. Of course, it is possible, this new take on Batman will also give the world a new take on Catwoman, but any details or hints are few and far between.

Whether or not Catwoman will be a villain in The Batman remains to be seen. The caped crusader gas a lot of foes in the comics, though, and as of now, it's unclear who will be taking on the Bat in this new movie directed by Matt Reeves. While Kravitz's casting has been confirmed, and Catwoman is a longtime adversary for Batman, there are still rumors that Jonah Hill could play the Riddler or the Penguin in this film, which could suggest a more ambiguous role for Catwoman.

As for whether fans will ever get to see Kravitz's Catwoman actually interact with Momoa's Aquaman, any such crossover doesn't seem to be on the table just yet. This new Batman film, slated to hit theaters June 25, 2021, marks a departure from the previously established DC Extended Universe, which featured Ben Affleck as Batman in Batman v. Superman, Suicide Squad, and Justice League. Aquaman, of course, belongs to that previously established shared universe, having made his superhero debut in Justice League, which could prevent a Aquaman-Catwoman family reunion from ever hitting the big screen.

That said, with so much still apparently up in the air, it's possible that The Batman will connect to the world established in Justice League and Aquaman. And, if that happens, then fans could get a glimpse at Catwoman and Aquaman sharing a holiday dinner together after all.

More like this
Zendaya Shares Intimate Photo With Tom Holland To Wish Him A Happy Birthday
By Bustle Editors
The New Bachelor Will Be Announced Next Week & Here Are The Top Contenders
By Grace Wehniainen
The First 'Percy Jackson & The Olympians' Teaser Comes With An Ominous Warning
By Grace Wehniainen
Nicola Coughlan Shared A Lady Whistledown Excerpt From ‘Bridgerton’ Season 3
By Grace Wehniainen, Alyssa Lapid and Sam Ramsden
Get Even More From Bustle — Sign Up For The Newsletter