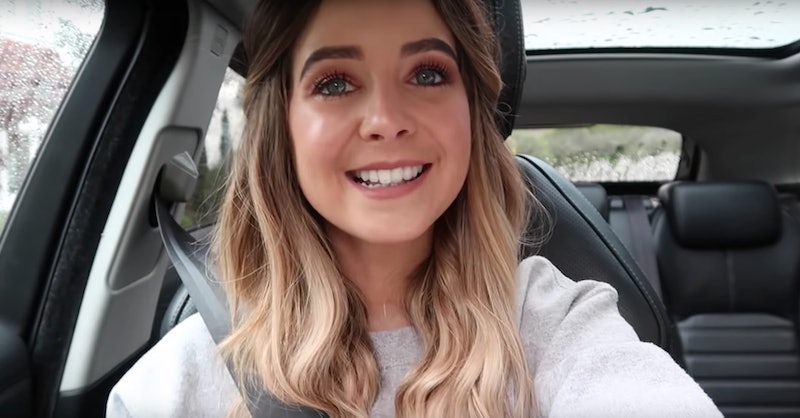 Something which has been on the rise in the past decade is the concept of the influencer. It's almost as if overnight certain people's job became, well, just being themselves. Which is pretty effing wild. And then there are Youtubers, which is a whole other layer of wilderness I feel might have passed me by. However, unless you've been living under a rock for the past decade, you should know who Zoella is. Arguably the queen of UK Youtube, the vlogger has recently put her weight behind a good cause. Zoella videoed her smear test and, babes, we stan.

The star chose to record and stream the whole thing in order to raise awareness about the importance of keeping up to date with your cervical health.

In the video she spoke about her reasoning behind choosing to record the experience, injecting it with her signature sense of humour and positive attitude:

"In the ten years of blogging this is a moment. Here's me thinking I've overshared... then I bring you into a smear."

Then she goes on into the clinic and introduces her five million followers to the lovely nurse Jenny. Jenny has been doing smear tests for over 20 years so is definitely an expert in the field. And, knowing that many people are often nervous and curious about the whole thing, Jenny was incredibly patient and explains everything ahead of it happening.

Zoella also added some questions she had received from her Instagram followers. One of the main questions asked by her followers was "does it hurt?" The answer to that, Jenny explained, is dependent on many different things. Because every person and their sensitivity is different.

After a detailed questionnaire is filled out, with questions like whether she was on the pill or not and when her next period was due, Zoella was ready for the test. Jenny was incredibly patient, understanding, and open about the procedure. Explaining that it absolutely doesn't need to be a stressful or scary experience. She added that any anxieties can and should be assuaged by medical professionals, saying:

"If you're anxious please come and talk to us. Because so many people are scared of having a smear test because they don't know what's involved."

After seeing all of the implements necessary for the test and Jenny explaining to Zoella what they are, the test went ahead. Which took a mere 48 seconds guys. And after that, they spoke about what happens next and Jenny explained she has 12 weeks to wait for her results, which will be posted out to her.

Although this is a bit of an unusual thing to record and share, Zoella is incredibly brave for doing so. Raising awareness about the importance of keeping up to date is enormously important. Especially, as Bustle has previously reported, smear test attendance is at the lowest it's been for 21 years.

Hopefully this video and campaigns from organisations like cervical cancer charity Jo's Trust will mean that people are more aware of the importance of their cervical health.

Check out the NHS website for any questions regarding smear tests.