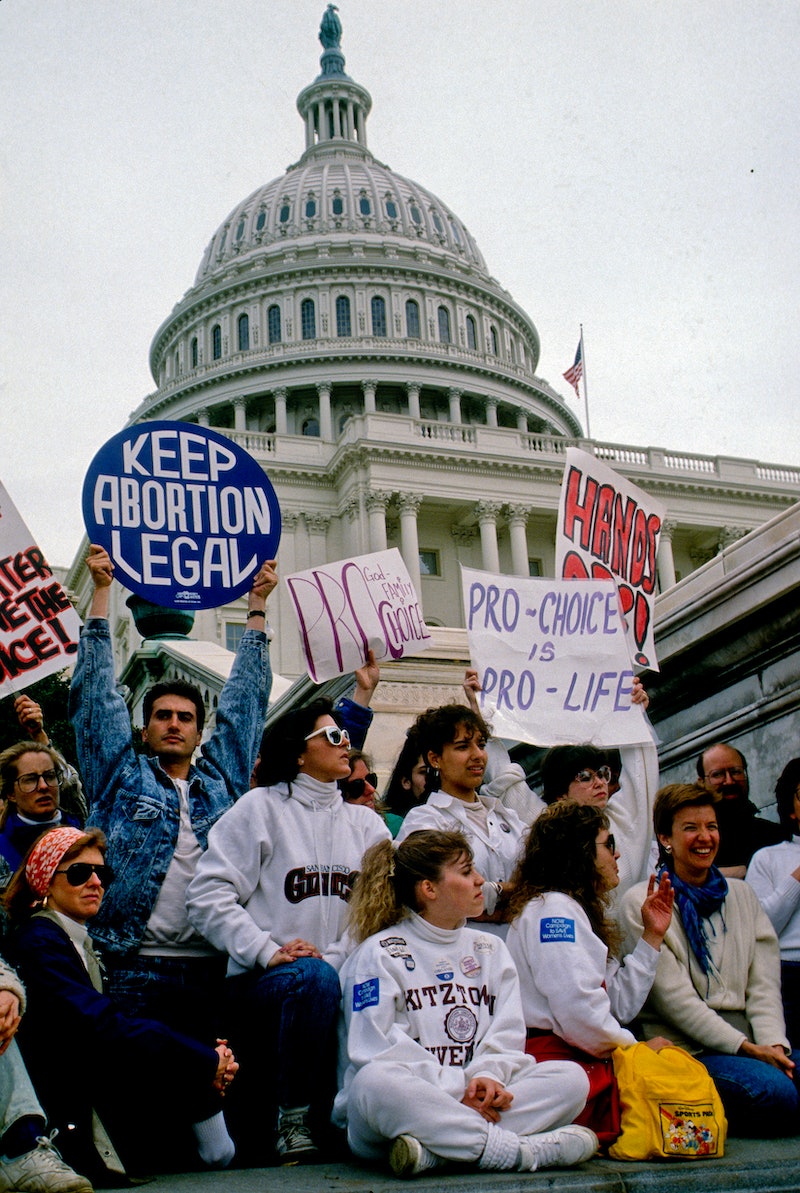 In 2013, Texas implemented a slew of laws targeting abortion providers, shuttering over half of the state’s 40-some clinics overnight. The founder, CEO, and president of one such clinic, Amy Hagstrom Miller of Whole Woman’s Health, felt she had no option other than to sue the state to protect Texans’ right to choose. Still, as the now-landmark case Whole Woman's Health v. Hellerstedt wound its way through the federal court system, she was commonly asked the question: “Are you ready to risk the abortion rights of the whole country?” Bringing a case to the Supreme Court can lead to a Roe v. Wade-level decision — expanding rights for the entire nation — or the opposite.

Nine years later, and with three reproductive rights cases currently in the federal court system, Hagstrom Miller finds herself in a situation with similarly high stakes. Though the Supreme Court said access to safe, legal abortions was a constitutional right 48 years ago, the anti-choice movement has steadily chipped away at the protections enshrined in Roe through restrictions and bans. The October SCOTUS confirmation of Justice Amy Coney Barrett, who is publicly anti-choice, was another blow to the reproductive rights movement, advocates said at the time.

Says Hagstrom Miller, “You have to ask, ‘What advancements or rollbacks could happen?’” if the court rules one way or the other.

But while bringing cases to SCOTUS was one of the only ways to protect national access under President Trump and a Republican-dominated Congress, a lot has changed in just three months. With the inauguration of President Joe Biden in the bag, pro-choice groups are gearing up to not just preserve the status quo, but expand abortion access — and rights — nationwide.

“We’ve long known that the promise of Roe v. Wade was never real for working families in America,” Kelsey Ryland, co-director of All* Above All, a reproductive justice policy and strategy organization, tells Bustle. That’s why, she adds, now’s the time to “re-imagine” what Roe can do for people. “The courts are one piece of protecting access to abortion care, but they’re not our saving grace.”

Below, four reproductive rights advocates explain what their biggest priorities are for the next four years.

A major first step to expanding reproductive health care access in the United States independent of the court system would be repealing the Hyde Amendment, the annual budget bill rider that bars federal funds from paying for abortions. Under Hyde, people enrolled in Medicaid can’t use that health insurance for terminating a pregnancy, except in limited cases. This budget detail keeps the poorest Americans from receiving the same health care that their wealthier, privately insured peers have. Without insurance coverage, a first-trimester abortion costs about $500 in the United States just for the procedure; many clinics charge up to $250 in additional fees.

The Biden administration has pledged to remove abortion coverage bans like Hyde from the budget, and a slim Democratic majority in both the House and Senate mean that it’s possible. But Ryland stresses that Hyde is just one piece of the puzzle. Earlier this month, All* Above All released a policy proposal that would holistically address how economic marginalization keeps people from getting comprehensive reproductive care. In addition to ending Hyde, the proposal points to raising the federal minimum wage to $15 an hour, ending tipped wages, protecting essential workers from deportation, and including low-wage workers in economic recovery efforts as actions the Biden-Harris administration can take in their first 100 days.

“We have a great opportunity with the new administration and we’re really calling on the Biden-Harris administration to build back bolder,” Ryland says. “This is what we mean when we say that Roe was never enough. People need comprehensive and bold solutions to thrive and get the care they need.”

Getting Money To People, Quickly

Yamani Hernandez, the executive director of the National Network of Abortion Funds, echoes the need for Hyde repeal, but adds that there are many more costs that go into terminating a pregnancy. That’s why Hernandez’s organization has focused their past year on implementing a process to pool together funds, in preparation for whatever changes SCOTUS’s conservative supermajority might bring.

Abortion funds help people afford both the procedure and associated expenses, like lodging, gas money, or child care. Hernandez explains that most funds aren’t able to pay for the full cost of an abortion for every person who calls. Generally, they’ll make a pledge of a certain dollar amount, and then refer the patient to other funds that might be able to help contribute the rest, so that the patient effectively crowdfunds their abortion.

“We want to close that gap so people don’t have to call around to five different funds to get $50 here, $200 there,” says Hernandez. “On average, an abortion fund is able to fund about 1 in 4 people who call. We want to raise enough money to make those budgets higher.”

The fund pooling program is now being piloted in certain regions of the country. The patient gets matched with a full-time staff case manager who will follow them throughout the process, taking the work of calling different funds off their plates.

The Supreme Court's conservative supermajority undertook its first decision on abortion access in early January, when it approved a Trump administration request to reinstate restrictions on medication abortion that had been temporarily lifted because of the pandemic. Now, patients have to pick up mifepristone in-person (even though you take it at home), rather than have it mailed to them.

Decisions like these explain why Kirsten Moore, the director of the Expanding Medication Abortion Access (EMAA) Project, has always focused on swaying Food & Drug Administration (FDA) policy, rather than trying to make change through legislation. Ultimately, it comes down to one FDA program, called Risk Evaluation and Mitigation Strategies (REMS), that regulates high-risk drugs like chemo medication to ensure they’re used safely. Mifepristone, however, is safer to take than a Tylenol, and unlike chemo drugs, is taken at home.

“The Biden-Harris administration needs to speak up early and indicate their concern with the Supreme Court decision … [and] encourage the FDA to undertake a full review of the REMS,” Moore says. She hopes that without fear of pushback from the Trump administration about mifepristone’s regulations, the FDA will be ready to re-evaluate how patients can get this medication.

Creating Change On The Ground

Another crucial way to work around the Supreme Court? Change hearts and minds on the ground. “If we could have a shift in Texas like what has happened in Georgia, we could stop these laws from getting into the court system altogether,” says Hagstrom Miller. “It’s a lot cheaper to block a law from being passed in the first place than to block a law from going into effect [...] and that would be more powerful and more long-standing than any given court case.”

Rachel Rebouché, the associate dean of research and James E. Beasley Professor of Law at Temple University, adds that the pandemic has changed how people have become accustomed to seeking out care. “Virtual clinics, online pharmacies, patients having medication abortion mailed to them — this all is about to become even more important now” that the FDA restrictions on mailing medication abortion pills are back in place, but the pandemic continues on.

Rebouché is optimistic that no matter what policy changes get made, patients and providers will step in to fill the gaps. “There will become abortion markets that try to meet the needs of abortion deserts. That will have costs. People will travel. Self-managed abortion will jump and there will be consequences. But there will also likely be [financial] incentives to build out ways to support these markets, and I do think that’s where people are looking right now,” she says. “If you can’t rely on the Supreme Court and the Constitution for protection, then state regulations, federal actions, informal networks, and service infrastructure has to be the way to go.”