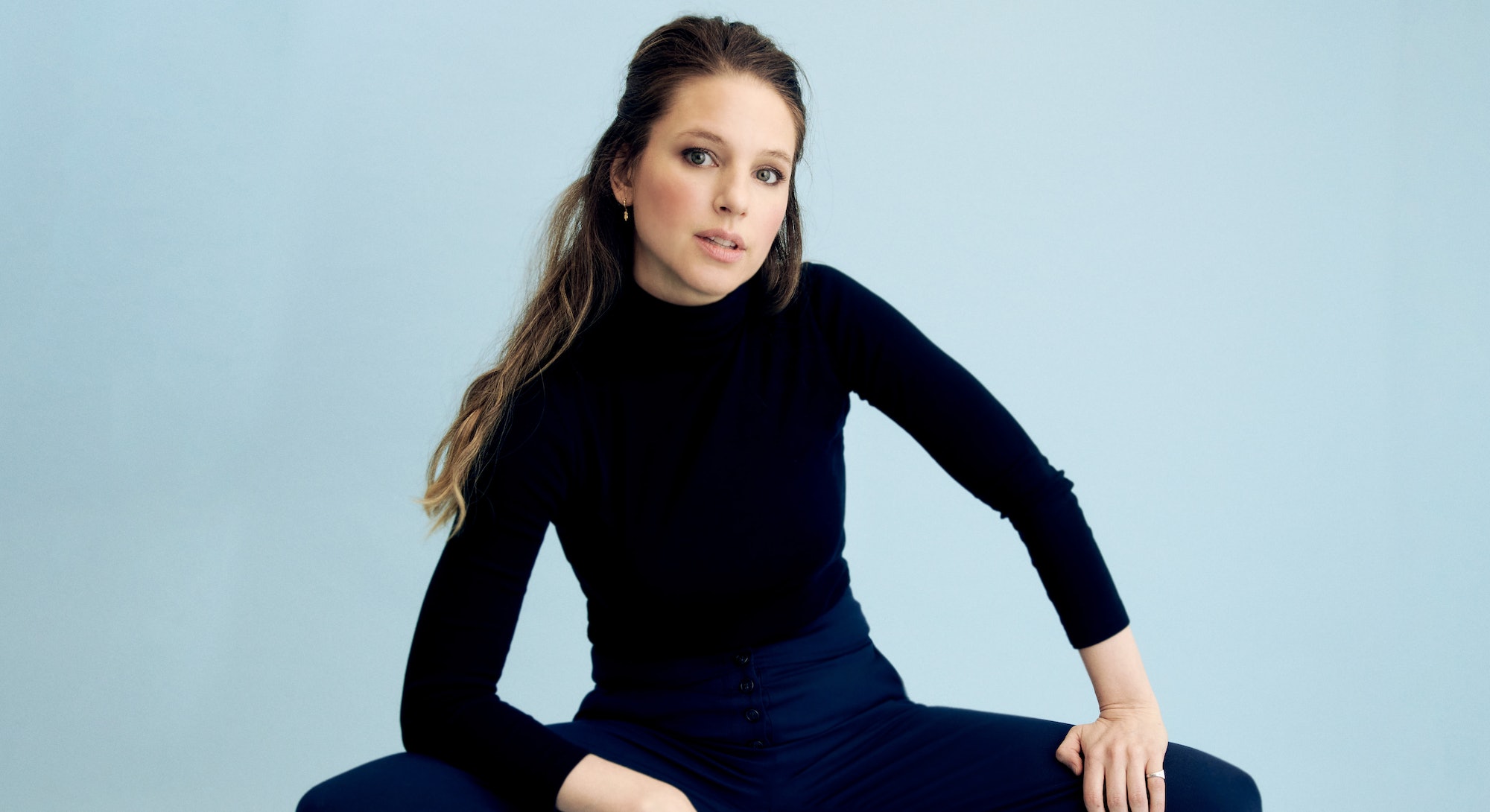 Within four minutes of meeting Lisa Donovan, she upends my understanding of astrology. I’d asked about her sun sign, Gemini, the curious, communicative twins of the zodiac. But instead of answering, she wrinkles her nose as if I’d inquired about a middle school crush. “We don’t even do sun sign astrology,” says Donovan, the founder of astrology-based app The Pattern. She thinks its primary function is to sell newspapers. While Donovan, 41, is a Gemini moon and a Cancer rising — the same as Kylie Minogue — she relates most to Saturn’s influence on her birth chart. “Saturn [governs] feelings of inadequacy, and not being enough,” she says. “You spend your life trying to prove something.”

There’s little that Donovan has to prove, however. Over the past decade, she’s parlayed a successful YouTube company — like, over-half-a-billion-dollars successful — into founding one of the top three astrology apps, the other two being Co-Star and Sanctuary. But Donovan did not get into astrology until her mid-30s, after a period in her life where “very quickly, everything shattered.” She developed The Pattern in order to serve those who were similarly skeptical — those who, perhaps, could most benefit from its cosmic insight, as Donovan did.

Zooming from her childhood bedroom in Scarsdale, New York — she was visiting her mother for the holidays — Donovan speaks quietly but punctuates stories by talking with her hands. She dresses as a consummate tech CEO, with her blonde hair pulled off her face and a Jobsian black turtleneck, but pairs the sartorial trope with a tangle of crystals around her neck: amethyst, quartz, and lapis lazuli.

For someone who basically invented the concept of going viral on YouTube (more on that later), Donovan is, ironically, extremely private. She posts sporadically to Instagram but maintains no other social media. “I literally did not want to ever have to do any of this,” she says, referring to press and social media. “I kept being like, ‘Let's not say anything. Why does anybody need to know anything? Why can't it be this thing?’”

By that, she means let The Pattern’s sensational word-of-mouth success speak for itself. It’s been lauded as “scarily accurate” by everyone from Issa Rae and Channing Tatum to SZA’s therapist. The app, on the cusp of raising Series A funding, has garnered at least 18 million profiles, with a 50% year-over-year increase in active users, almost entirely without marketing. (For comparison, Co-Star boasts 20 million downloads.) Though the app is powered by astrology — when you sign up, you plug in your birth date, time, and location, and your personal “pattern” is based on the resulting natal chart — users are drawn to it precisely because it avoids phrases like retrograde, sextile, or trine.

The app’s overall aesthetic is conspicuously anti-woo-woo, too, with Facebook-y blues and greens. It sends you push notifications a few times a day with both personalized prompts and “world updates” based on global celestial cycles. Written in the gentle, matter-of-fact tone of a therapist winding down a session, these reports are delivered in one- or two-sentence-long slides that you swipe through, photo dump-style. You can also measure your compatibility with in-app friends or plug in a new crush’s birth info to do so.

The majority of the material was written by Donovan herself, with an eye towards translating stellar diction into plain English. These anti-horoscope horoscopes are a hit with self-proclaimed skeptics.

“I do not really believe in astrology — I never cared about my horoscope,” one user told Bustle last year. “But a friend made me download The Pattern, and now I can’t stop checking it.”

Born in the New York City exurbs in 1980, Lisa Donovan grew up in a “very analytical home, [where] everything had to be rational,” says the CEO, whose mom was an artist and dad was a photographer. Though she describes herself as “terrible” at school — she asked to go to the water fountain so often that her teachers gave her a personal cup to keep in class — she realized she liked learning at the University of Colorado at Boulder and dove into a thesis comparing secular and religious terrorism just before 9/11. After graduating summa cum laude, she considered grad school but decided to take the summer off to visit her older brother, Ben, an actor in Los Angeles. She never left.

She held a mishmash of random jobs there — barista, answering phones at a women's safe house, assisting a public defender, production design — before starting her YouTube page, LisaNova, in 2006 during the platform’s Wild West heyday. A few viral LisaNova videos led to a deal with Mad TV in 2007, and two years later, Donovan co-founded Maker Studios, a multi-channel network that at one point managed approximately 55,000 YouTube channels, with her brother and other partners. When she wasn’t overseeing Maker’s programming, Donovan continued uploading videos as LisaNova. (So named not for her surname, nor the flagrant celestial subtext, but their family car, a Chevy Nova.)

Her videos embodied the madcap neo-dadaism of the early-aughts internet. In a 2014 video that’s still public, titled “My Body Is A Temple,” she played “affirmation girl,” who solemnly declared, “Today is a new day. You are starting an entirely different life.” She ended the video by “rescuing” a cake she finds abandoned in a public park and eating it with her hands, ferally. It has nearly 1.5 million views.

But despite the lighthearted tone of Donovan’s videos, she characterizes that period as a grind: “You’re literally just making content to have enough money to put back into the business, so it's just... There's no heart in it anymore,” she says now. Off-camera, her life was falling apart. “My ego, my personality, what I thought, who I thought I was, the relationships I thought I'd be in, the friends I'd have, the business partners I'd have, all of it.”

In March 2014, Disney bought Maker Studios for $500 million (and promised up to $450 million in additional payments if growth targets were met), but instead of hanging out on a boat somewhere with her proceeds from the sale, she moved home to be with her father, who’d gotten sick. He passed away about a year later.

For the first time, Donovan found herself open to the stars. A friend recommended an astrologer to her, and Donovan went into her first birth chart reading with few expectations. “My impression of astrology [was of] something new age-y or cheesy,” she says. Instead, she emerged with a mirror held up to her inner world. “It became this incredible tool for me and made sense of the chaos, of everything I couldn't understand.” She followed the astrologer, an older man who’d been practicing for decades, from Ireland to Joshua Tree, California, absorbing the millennia-old oral tradition. Back at home, she worked year-round for 10 hours a day writing the material that would become The Pattern. She tested readings on everyone from friends to Uber drivers, asking if her analyses resonated. When something wasn’t spot-on, she tinkered with it until it was.

“With Maker [Studios] or LisaNova, I was just creating whatever I wanted in the moment. There was no rulebook. With The Pattern, I was trying to create a system based on thousands of years of wisdom and knowledge,” Donovan says. “I felt a duty to something bigger. There was a certain integrity it had to have.” By 2017, The Pattern was ready for the masses. Donovan filed the corporate paperwork founding her new company on a day when its birth chart would be as auspicious as possible. “It’s a Pisces rising,” she says of the app; that makes it a healer.

Since then, the company has continued to expand. In 2020, she hired marketer Alan Fung as chief growth officer, hoping to tap his experience leading the team that grew Candy Crush to 327 million users. “She was ahead of the curve with Maker, with YouTube, and I think she's ahead of the curve now with astrology,” says Fung. In the last year, the 15-person company brought on an additional editor and writer and soft-launched a dating feature, called Connect, which Donovan hopes to roll out officially this spring. The company is in the process of growing a London-based tech team and eventually intends to expand The Pattern’s offerings even more. “People are hungry for, ‘Well, now what do I do?’” Donovan says.

Increasingly, people want that guidance to come from above. In 2018, 29% of American adults believed in astrology, an upward trend from 25% in 2005. Though over two-thirds of the population are still skeptical, Donovan doesn’t believe that hinders the app’s growth.

“We don't consider ourselves an astrology app. This is a life app,” she says, a point she stresses multiple times. “I’m not trying to convince anybody of anything. I'm not trying to push astrology down anybody's throat.”

Of course, there’s an inherent irony in that answer. In building a personalized self-help guide based on astrology, you situate users in a millennia-old tradition, no matter what you call it. Donovan clearly respects astrology, so why erase the traceable bits within the app?

“I truly feel this app is for every single person in the world because every person wants to feel seen and understood,” Donovan says. “I'm just trying to make sure [that insight] is delivered in a way that is really palatable, and everybody can understand it.”

Astrologer Alice Sparkly Kat agrees with the concept. The Pattern’s accuracy and plain language “makes it easier for astrologers to use, too, because you can get out of your head and just read it,” says Sparkly Kat, the author of Postcolonial Astrology: Reading the Planets Through Power, Capital, and Labor.

Donovan credits Saturn’s influence on The Pattern’s accuracy. “If I didn’t think it was up to par, I had to keep going until it was right. It wasn't really about, well, is that person gonna respect me if they read this thing?” she says. “Maybe that’s from YouTube — you make a fool of yourself, I mean, a ridiculous fool of yourself,” she adds, laughing. “[You have to say], this will be its own thing, and let it go. You can’t be attached to it.”

A few days after one of our conversations, I ask for Donovan’s birth time and location in order to run my bond with her. The Pattern says we have a rare “epic” bond, “one of the strongest connections you can have in a friendship.” As I tap through the app, I stumble across a line that sums Donovan up better than I could: “It’s like she’s both really old and quite young at the same time. She has a richness and depth that’s often at odds with her innocence and vulnerability. [...] Her life could be defined by striking and considerable changes.”