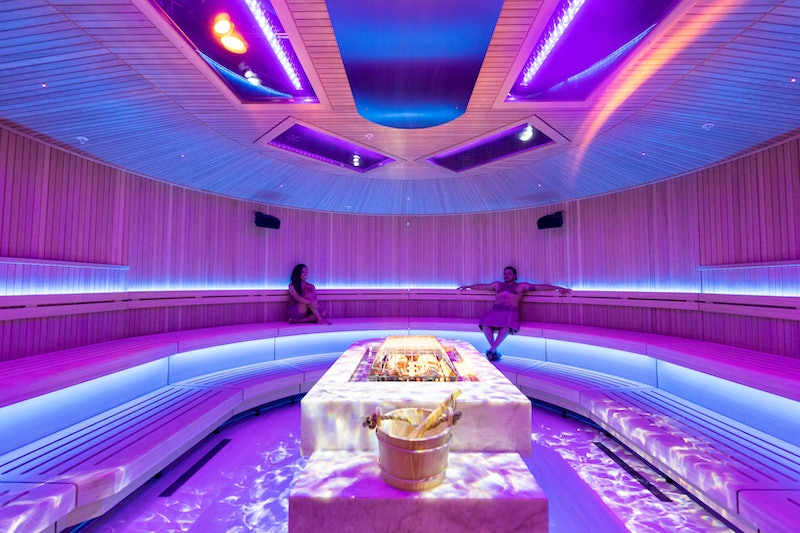 Whenever I’m sitting in a sauna, my mind becomes inherently focused on the suffering I’m going through as my body’s temperature increases to rotisserie-chicken-cooking heights. This wasn’t the case at the Aufguss sauna session I experienced in Las Vegas, though. While I still schvitzed a whole lot, I was so entranced watching a nearly naked woman dance around the sauna that I didn’t have a free moment to think about how hot I was.

This particular sauna treatment is among the offerings at the Awana Spa in Resorts World, a trio of newly opened hotels in Vegas. The spa is one of the most notable amenities at the resort — namely because it takes a unique social approach. When Resorts World invited me to check it out, I tried some of the European and Eastern-inspired rituals on its menu, from a Malaysian foot treatment to a detoxifying hydrafacial — but it was the sauna that really took the cake as being the most out-there, memorable spa experience I’ve ever had.

I visited the Awana Spa on a hot afternoon in September. Mind you, this is Las Vegas — so I was particularly looking forward to sweating out the toxins (i.e. the margaritas) I had just imbibed the night before. I waltzed past the Fountain of Youth pools to strip down into a swimsuit for the sauna, then waited with other editors outside the door. The Art of Aufguss, as the treatment is officially called, is an “event sauna,” so it’s not your traditional sweatbox that you go in and out of as you please. Rather, it’s actually a show and runs on a schedule. When the clock struck 2 p.m., a gorgeous red-haired woman wearing a crochet bikini made out of pearls appeared and ushered us into the spacious room.

I quickly learned she wasn’t there to sweat alongside us — she was the “sauna meister,” aka the dancer in charge of the curated experience. Once everyone sat down in their towels, the lights in the sauna dimmed, music started playing, and she began to dance. Over the course of the next 20 minutes, she shimmied and leaped across the room, moving through plies, pirouettes, and arabesques as the crowd watched. Her dance routine also incorporated some tools that added not only to the show’s flamboyance but the viewers’ relief: At several points, she went around the sauna waving an oversize fan as a makeshift breeze to cool us off. There was also aromatherapy-infused ice, which the sauna meister used to spritz onto the crowd as she twirled under the colorful lights.

The Cirque du Soleil style sauna show isn’t just a thing because the spa happens to be in Las Vegas, a city known for its all-out theatrics. It actually has roots in older spa traditions. “The Art of Aufguss is a long-storied European spa tradition that supported community health and wellness experiences,” says Jennifer Lynn, the spa director of Awana Spa. In Germany after World War II, she says, people were looking for ways to heal — and that’s when sauna meisters were introduced. “They were meant to guide the experiences and encourage social participation,” Lynn says. Of course, these sauna treatments didn’t originally look exactly like the one at Resorts World — she admits the Awana Spa wanted to add some Las Vegas flair to the experience.

There was aromatherapy-infused ice, which the sauna meister used to spritz onto the crowd as she twirled under the colorful lights.

I could see the legit reasons behind pairing a theater-style show with a sauna treatment. Besides being entertaining, it distracts you from the heat. I’m someone who hates being uncomfortably hot, so doing a heat-based wellness treatment is something I have to force myself to sit through as I listen to my brain go off on a rant the entire time — but with the Aufguss happening before my eyes, the sauna meister worked as a shiny diversion. Whereas time typically feels comically slow when I’m in a sauna, the 20 minutes I spent watching the sauna meister perform was up in a flash.

This is great if you’re like me and need a proverbial carrot hanging in front of you to get you through the sweltering heat — especially since saunas are so beneficial to your health. “You’re detoxifying through the sweat glands,” says Lynn. “Raising the body’s core temperature through the 170-degree heat and 10 to 15% humidity levels activates the removal of toxins through sweat.” Being in a sauna also boosts your blood circulation, which results in a mood boost and better sleep.

I left the room at Awana Spa feeling invigorated and sweaty — though surprisingly not as drenched as I usually get from a sauna session. I was also extremely parched, which makes sense considering the alcohol I drank the previous night, so I ran to the nearest water station to hydrate. Basically, I felt the same as I normally do post-sauna... if you don’t count how excited I was to tell my friends about this more out-there take on the spa treatment. If you happen to visit, the Art of Aufguss will run you $40 if you’re a hotel guest or $50 if you’re staying elsewhere.

The jury’s out on whether the Aufguss-style sauna treatments are going to become a trend. The Global Wellness Institute predicted they would become increasingly popular in a 2017 report, but I’ve only seen a rise of infrared saunas in the United States. While I’ve never been particularly enthused by sitting in a sauna, if I’m going to voluntarily stay in a 170-degree room until every single pore on my body is schvitzing, this is the place I’d want to be. Think about it: If you’re not busy watching a sauna meister dance around and wave fans at you, all that’s left to look at are your toes and the half-naked strangers around you.