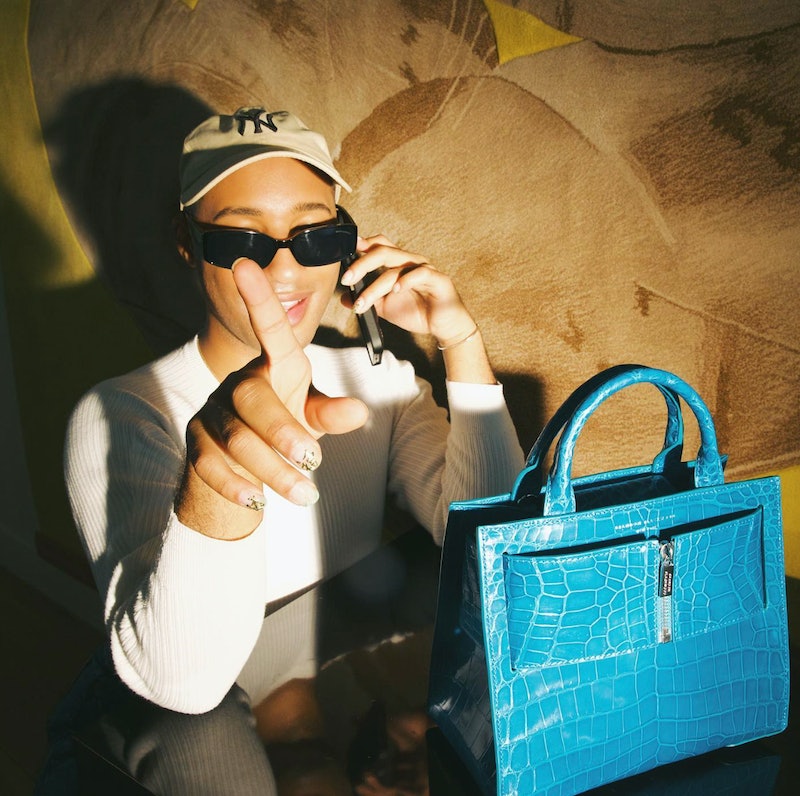 Brandon Blackwood has a self-described love-hate relationship with the handbag that put his brand on the map. “I didn't want to be pigeonholed, and I didn't want to be just a one-trick pony,” the Brooklyn-bred fashion designer shares when we sit down to talk all things career. Of course, the bag in question is the ESR Tote, a style launched in 2020 with the words “End Systemic Racism” written across the front, as seen on celebrities from Kim Kardashian to Chloe Bailey.

The ESR Tote is no longer in production, and any worry of Blackwood being viewed as a one-hit wonder is similarly extinct. Over the last three years, the brand has expanded its offerings to include not only a bevy of chic handbag silhouettes — the Kendrick Trunks are the most popular, but the Nia Bag has my heart — but forays into footwear, sunglasses, outerwear, and more.

With so much more to share, it’s hard to believe Blackwood ever had fears of moving beyond his first successful piece. Now, he and an adept collective of fellow designers-turned-friends make up fashion’s new guard, eager to kick off the new year shaping not only trends, but the industry itself.

Below, a conversation with Blackwood on his very first retail job, scaling his self-funded brand, and how his generation plans to shake up fashion as we know it.

What were you doing before launching your own brand?

I went to school for neuroscience and American studies. After graduation, I kind of jumped right into retail because I didn't have real fashion experience or any connections. I was working at Crossroads Trading, which I don't know if you're familiar with. It's like a Buffalo Exchange — just buy, sell, and trade clothing.

That's when I made my first bag, and I made it solely for myself. I literally just Googled "handbag manufacturers” one day. I don't know what came over me, but I just wanted to do it with no intention of selling it.

From there, everyone would compliment the backpack that I made — it's now my Portmore Backpack. That's why I knew I needed to at least try making a brand. I made a lot of connections with stylists and editors at Crossroads because they would all sell their gifted items there. I would show them my backpack, and they'd be like, "Oh my God. Wait. That's you? You need to make it. You need to sell it."

I found out about the brand on social media. It sounds like you had some fashion people in your corner from the jump, but how long did it take for the brand to gain a following?

The first time I posted it, it was insane. So many influencers and bloggers were buying and wearing them, and so many people going to protests. I didn't realize how impactful that bag would be. I think a lot of people found out about me through that bag. Then they saw the trunks and the other things I was making, and then my trunks started selling out. Then my backpack started selling out, and then I just started continuously releasing and releasing, trying to keep up.

You’ve expanded a lot since then. Did you have a vision for what you wanted the brand to become?

I want to be the next big accessories moment in general. But I'm always going to be a little bit more affordable. I want to make a good product, and if it's good, people will like it.

My goal is not to be one of those designers who have what I call “museums” — they have really great collections, but you don't see any of them in stores. You just see them online and in photos, and that's it. I want to be a brand that's out there in the world that is Black-owned. It doesn't exist, and I feel like I'm this close to making it happen.

Who are your favorite designers?

Y/Project. I love Loewe. Marni has super simple yet constructed shapes, but their textures are next-level. I love the gaudy, kind of crazy tapestry moment that Gucci was having with Alessandro [Michele]. I know he's leaving, but I kind of loved that [collection] because it was so out of my comfort zone.

Do you think the old guard is open to embracing new designers in the space?

I think the old way of rising in fashion is almost archaic now because it was very guarded. Everyone needed a connection. Now, we have social media. If no one in fashion paid attention to me, I would still have an audience and a customer base. I feel like with brands now, we're doing it backwards — normally, you want to impress everyone in fashion, then they help you get the customer.

Now, you get your customer on your own, and then [the fashion world is] like, "OK, you can come in." No one would know my brand if I had to do it the traditional way, because I didn't know anyone. I love that because it levels the playing field.

It used to be more about being connected than creative.

I think the new brands are also building communities, whereas older brands didn't really do that. It was more like having a fan base.

Brands coming up now literally have communities around them — it’s way more personal because they genuinely care about what you're doing, what you stand for, and what you're making.

That strength in community makes a budding designer hard for the industry to ignore.

Fashion even looks cooler this way, because no one's thinking, "I hope X, Y, or Z likes this.” People are creating for their actual customer base, instead of for two or three people.

More like this
13 Exciting Spring Fashion Trends That Feel So Fresh
By Allie Fasanella
Hailee Kaleem Wright's Topsy-Turvy Path From MTV To Broadway
By Samantha Leach
At 28, Rosie Perez Risked Her Career To Stop Playing Stereotypes
By Gabrielle Bondi
42 Black Owned Fashion & Beauty Brands To Support Today & Always
By Mekita Rivas, Shea Simmons, Kui Mwai and Dominique Norman
Get Even More From Bustle — Sign Up For The Newsletter
From hair trends to relationship advice, our daily newsletter has everything you need to sound like a person who’s on TikTok, even if you aren’t.