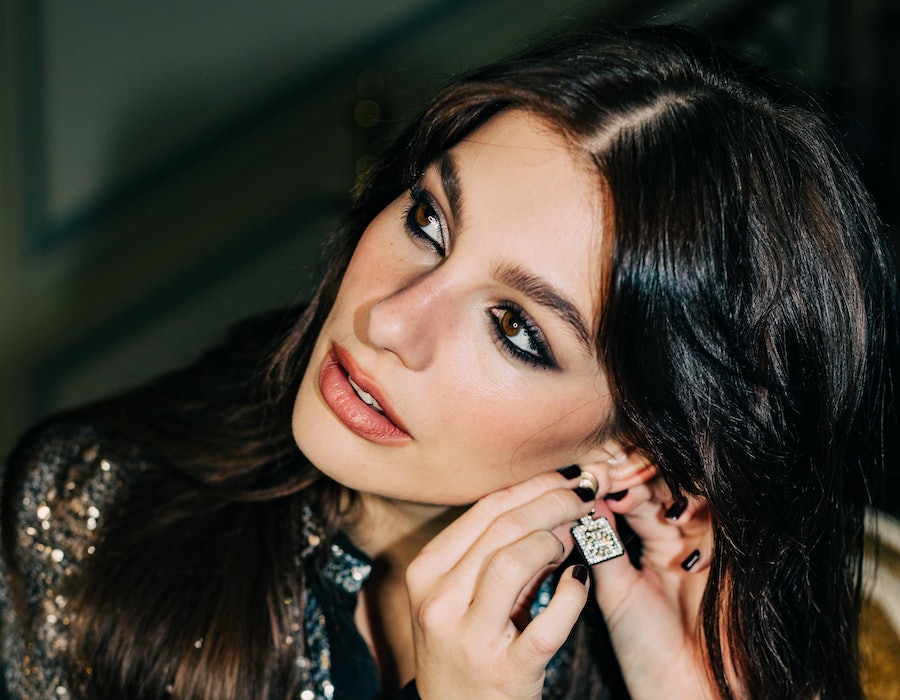 Jeremy French
We may receive a portion of sales if you purchase a product through a link in this article.

Camila Morrone lights up when she learns I’ve read Daisy Jones & The Six. “Oh, my God, thank you for reading it,” she says. “Do you love Camila or what?” The fact that Camila (the actor) and Camila (the character in Daisy Jones) share the same name seems like fate; the bestseller by Taylor Jenkins Reid is being adapted into a much-awaited Amazon Prime series, debuting March 2023, and if ever there was a breakout role queued up to propel Morrone into the spotlight, this is it. In the book, Camila is the longtime girlfriend of Billy Dunne, a magnetic rockstar trying to navigate the early days of fame with his band, The Six. She’s a steady, grounding force, yet multi-faceted — a mirror to Billy’s impulsive, tortured bandmate, Daisy Jones.

Despite the fact Morrone’s chocolate-brown hair and dark features bring to mind sultry film legends like Penélope Cruz, Monica Bellucci, Sophia Loren — all of whom she admires — there’s a sunny, California-girl energy she gives off in real life. This might be a result of her L.A. upbringing; born to Argentinian parents, she calls Los Angeles home while traveling to Argentina each year to spend time with extended family. “I try and go as often as possible because my whole family still lives there — only my mom and dad are in the United States,” she says. “Both countries mean a lot to me and play a big part of who I am, how I am, and what I believe in and stand for.” Beyond the much-awaited Daisy Jones series, Morrone also has two films slated to be released in 2023 — Marmalade, a “romantic heist” movie she stars in alongside Stranger Things’ Joe Keery, and Gonzo Girl, directed by Patricia Arquette. “Just getting out there and sharing these projects finally, getting to promote them...I really can't wait to do that,” she says.

When I catch up with Morrone, she’s getting a soft smoky eye (courtesy of Chanel Le Crayon Khol in Noir) applied by makeup artist Morgane Martini in a suite at the Ritz Paris. Giveon’s crooning voice wafts over the speakers. She’ll soon be the first to experience Chanel’s landmark event, Le Grand Numero de Chanel — a first-of-its-kind, public-facing, beauty fun fair that allows people to step into the world of Chanel and its most iconic fragrances. Morrone, who refers to her style as “less is more,” surprises everyone by changing into a glittering Chanel silver bodysuit. “I almost went with something all-black, but then I thought, it’s Christmas,” she laughs. “It’s so festive here in Paris, and Chanel metallic is just so incredible that I thought I should just go for it.” Martini describes the final beauty look in just two words: “Effortless and chic!”

Ahead, Camila Morrone shares her beauty secrets, hopes for 2023, and how overcoming her fear of failure led to fulfilling her biggest dream.

How does it feel to be in Paris during the holidays?

I think there’s nothing quite like being in Paris with a brand like Chanel. I got to see Gabrielle Chanel’s apartment yesterday and do an apartment tour, then the atelier and perfumery. It’s so cool to see where it all started and where it continues to evolve — the creativity and the whole process.

How would you describe your beauty philosophy?

I keep it quite minimal, especially when I'm traveling. I don't like to be a person that has an excess amount of products. I do love the Augustinus Bader cream. I believe in the philosophy of being as oily and moisturized as you possibly can before bed — as Hailey Bieber likes to call it, the “glazed doughnut.” She’s one of my girlfriends, and she taught [me] to always be soaking in moisturizer before you go to bed.

Chanel’s Les Beiges Sheer Colour Sticks are the best, and you can also use them on your lips, which is what I do. It gives you that monochromatic look. I love the Baume Essentiel gloss. It’s the best one out there, and I’ve tried a lot of them. I use it on the bridge of my nose and on my cheekbones. I use it every day, whether I’m doing a natural look or if I’m full-on red carpet. And I even put it on my eyelids as a sticky gloss, so that my eye shadow will crease, which is a really good secret.

I also use the Chanel Stylo Yeux Waterproof in Espresso every day — it's like a chocolatey brown, which I think is a little nicer for my eye color than black.

You dyed your hair pink recently.

I loved it! How do you keep your hair healthy between dye jobs?

Well, I can tell you a tip you shouldn’t do, and it’s bleach your hair for a movie. [Laughs.] But yeah, I had to go platinum blond and then put the pink on top in order for it to read because my hair is naturally darker. So it was quite the journey. I did it for a film called Marmalade, which I’m excited about, that will be out next year.

How have you been bringing your hair back to life?

I only had the bleach dye hair for three weeks, but it did a lot of damage to my hair, unfortunately. I’m doing deep-conditioning treatments. I’m taking biotin and prenatal [vitamins] — it’s scary to people when they hear “prenatal,” but they actually just have a lot of good ingredients for hair, skin, and nails. And you don’t have to be pregnant in order to take them.

You started off modeling, then transitioned to acting. What was that process like?

I think I always wanted to be an actor, and I was afraid to go for it because I was afraid of failure, which I think a lot of people feel in all different career paths and moments in life — that paralyzing fear. So I avoided it for a long time and kept it a buried secret within me. I got the opportunity to model, which I was incredibly grateful for, and it brought me to a lot of incredible places and I got to meet new people. I do think there’s an element of modeling that can also be a performance.

All of that played into getting me warmed up for ultimately going for acting and moving to L.A. I signed to an agency and just starting to audition, audition, audition until I got my first job. Now I get to live my ultimate career goal and dream, which was to be able to work as an actor.

How did you overcome your fear of failure?

I think there was a point I got to where I was like, “I’d rather just try and fail rather than have to live with never knowing what I could do.” You don’t want to let that fear fester inside you and create anxiety.

How are you similar or different to your character Camila in Daisy Jones & The Six?

I think the first time that I read Camila, I had a hard time not judging some of her choices — staying with Billy through everything, leaving her family behind. But she ends up surprising everyone and surprising herself. She ends up being such a grounding character in the show and book and kind of essential, really — I like to think of her as the glue that keeps it all together, until it doesn’t. I just tried to bring as much of my real Cami into it, and then explore the parts that weren't as similar to me and justify them and understand them.

Speaking of grounded, how do you stay grounded as you’re traveling the world?

I started incorporating a small meditation practice that is anywhere between eight to 10 minutes — I did it at the airport on my way here. I just put my AirPods in and do it anywhere. I use things like the Calm app and really anything I can get my hands on, even YouTube meditations. Especially when I’m moving at a high speed and there’s always a lot of people in the room and cameras and events, starting my day off with that as a baseline just eases the transition.

You said you loved reading Daisy Jones & The Six before you booked the role. What are you currently reading?

I haven’t picked up a book in a year because I’ve been on set and filming and reading scripts, but I actually picked up Animal by Lisa Taddeo for this trip. She wrote Three Women, which I loved so much and gave my mother to read, so I’m going to give Animal a try and try to finish that book before the new year.

This interviewed has been edited and condensed for clarity.