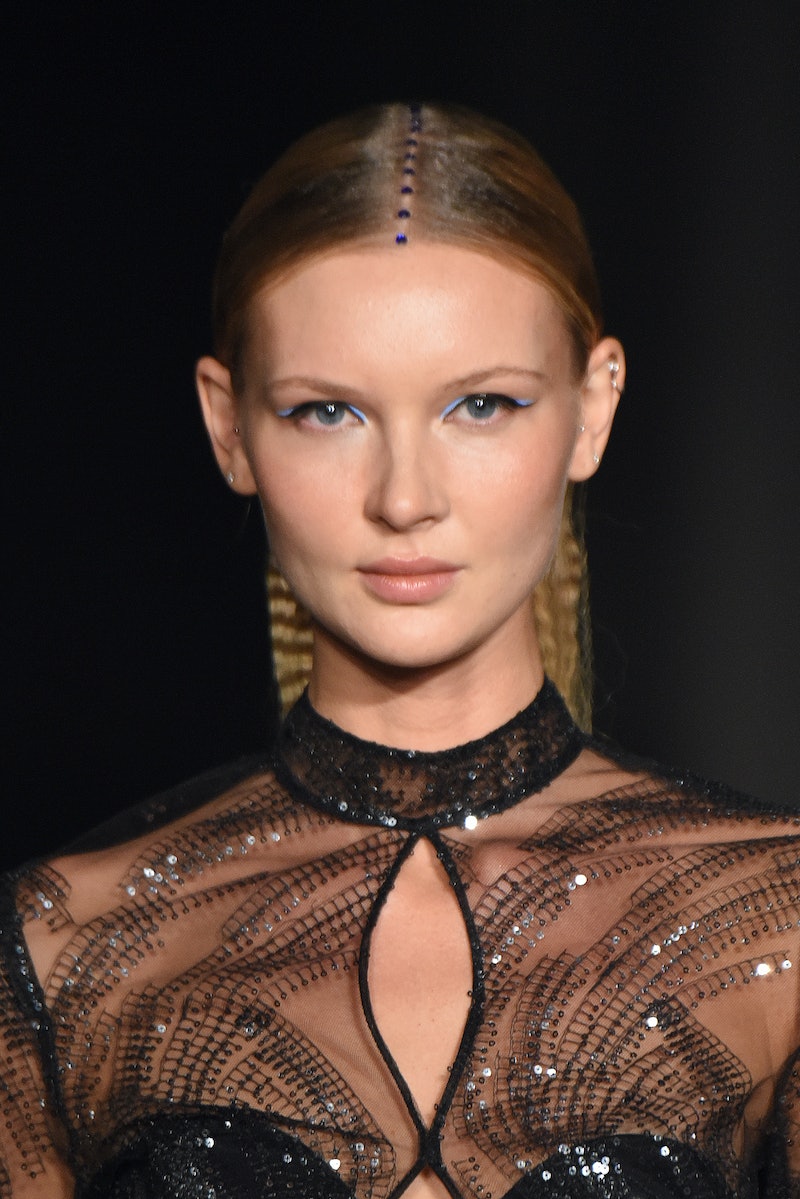 Every New York Fashion Week, fashion industry insiders and novices alike look to Christian Siriano's runway show for awe-inspiring gowns. But if there’s one thing that shouldn’t be overlooked, it’s the intention the designer puts into his beauty looks. (After all, who can forget the chain-adorned low ponytails on his Fall/Winter 2019 runway or abstract eyeshadow from his Spring/Summer 2022 presentation?) This NYFW, the "Victorian Matrix" themed look was no different.

For makeup, the central feature of the look was double winged eyeliner created with layered cornflower blue — seemingly a nod to both the nostalgic ’90s and mod ’60s tones that have been trending of late — and jet black. Fresh, glowy skin, fluffy brows, and a soft neutral lip completed the full face. "The whole concept is old-meets-new," Erin Stein, AVP Education Strategy and Pro Artistry of Charlotte Tilbury, tells Bustle.

The old started with lit-from-within skin. She described the natural glow of the models' base as "spa skin," attributed to Charlotte Tilbury's newest product, the Collagen Superfusion Facial Oil. The yet-to-be-released oil launches February 24, so the models at Siriano's show were the first to test it out. After the oil was pressed strategically into the high points of the face for a bit of natural highlight, the prep was finished off with the brand's best-selling Magic Cream — "We can never do a show without Magic Cream," says Stein — and Cryo-Recovery Eye Serum to de-puff the eyes.

To perfect the models’ complexions, the brand’s Beautiful Skin Hydrating Foundation was used to just spot conceal where needed. The makeup team catered the rest to each individual model based on what would complement their outfit best: some donned a slight "warm halo" contour around the hollows of the cheekbones, hairline, and jawline, while others sported a touch more glow thanks to the brand's Beauty Light Wand.

To achieve just the right cornflower blue for the liner, key artist Sofia Tilbury mixed the metallic end of the Super Blue Eye Colour Magic Liner Duo with Magic Away Concealer in shade 1 and swept it across the lid. The black eyeliner was a pencil applied very closely to the lash line for a softer effect. "The whole shape is very straight," says Stein. "Where the classic cat-eye has a little more of a curl to it, as a nod to the Matrix-y, tech-y feel [of the collection's inspiration], we wanted to keep the liner very, very straight." The liner followed each model's eye shape to form a more horizontal wing rather than one with an upward flick. While the blue shade was definitely reminiscent of eras past, the shape of the wing brought in the new element of the collection.

For lips, the Charlotte Tilbury team dabbed on just a bit of a mauve lipstick to complement each model's skin tone (Runway Royalty or Pillow Talk 3 were frequently used).

The cornflower blue shade was also present in the rest of the glam, most notably the models’ manis. Key nail artist Gina Edwards created an abstract swirl that featured both the cornflower blue and cobalt shades that made frequent appearances in the clothing. Edwards’ team first painted the models’ nails with two coats of OPI Nail Lacquer in “Can’t CTRL Me” to perfectly match the eyeliner. The hue "Isn't It Grand Avenue" was then painted in a loose S-shape from the nail bed up to the tip to cover about half the nail, and a small striper brush took the same polish shade to essentially outline the S-shape with a thin line to create a little negative space.

"[I'm finding that a lot of designers are featuring both abstract shapes] and negative space," says Edwards. "Negative space is around season after season because people enjoy it. It’s not really committing or being outrageously obnoxious with nail art, but still feels like you're relevant." She adds, "designers are really gearing toward adding color but not going too [wild]."

To tie in more nostalgia, the hair looks created by Jon Reyman were inspired by both the ’80s and ’90s. The hair was blow dried smooth with Dyson’s signature Supersonic hair dryer, then straightened to perfection with the Corrale straightener, which features flexible plates to reduce the amount of friction on the hair. (It's also cordless, perfect for touching up amidst the backstage chaos at a fashion week show.)

After using K18 Leave-In Molecular Repair Hair Mask to prep, the hair was parted down the middle, slicked down with Aveda products (which varied depending on the models' hair texture), and tied into a low ponytail. The ponytail was then crimped to add a bit of texture and to nod to the signature hairstyles of the 1980s and 1990s. Never one to shy away from a glam hair moment, Siriano requested a little extra oomph: a row of shiny cobalt rhinestones was placed along the models' part, which caught the light as they walked down the runway at the Empire State Building.

"I think it's cool and strong," says Reyman. "You know, Christian — his dresses are just so dynamic and beautiful, so [the hair] feels attainable and not too 'outside,' but still interesting and fun."

While it's hard to pick a favorite beauty look from Christian Siriano's runways over the years, this is one to remember for seasons to come.

More like this
The Best Beauty Looks Spotted At Paris Couture Week 2023
By Audrey Noble
11 Stunning Critics' Choice Awards Beauty Moments
By Audrey Noble
This Week’s New Makeup Releases & More Beauty Headlines
By Audrey Noble and Erin Stovall
15 Modernized '60s Makeup Looks & Hairstyles That Feel Wonderfully Retro
By Olivia Rose Rushing
Get Even More From Bustle — Sign Up For The Newsletter
From hair trends to relationship advice, our daily newsletter has everything you need to sound like a person who’s on TikTok, even if you aren’t.