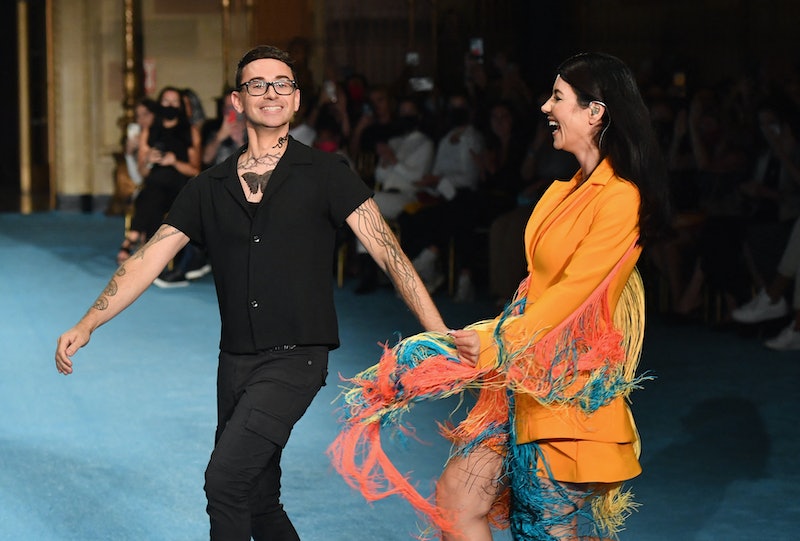 Christian Siriano has been thinking a lot about time lately.

There’s the nostalgia of the past, which inspired his Spring 2022 show, but also the promise of the future, ushered in by the designers he mentored as part of the SheIn x 100K Challenge series.

For the former, he “went back to a simpler time,” Siriano tells Bustle of his collection that debuted in September. “In a time when so many of us need an escape from the world, fashion is a great place to explore.”

His line of sharp tailored suits and cascading evening gowns was inspired by family vacations along the idyllic Italian coastline.

“The old photographs of my grandmother in the ’60s and ’70s on holiday in Positano — wearing her apricot orange dress — inspired a collection filled with color and joy,” he says.

Also bringing him joy is the crop of designers he met through SheIn. He was a guest judge for the brand’s 100K Challenge series, a competition for emerging talent vying for a grand prize of $100,000 to go toward their business.

“The young designers are so talented,” Siriano says. “When you hear their stories, some of them have really really struggled, and [it] was beautiful to see them thrive and get to be creative again.”

One such designer was Sasha Ruddock, the founder of size-inclusive brand Flaws of Couture who — spoiler alert! — won the competition. As a woman with Jamaican heritage living in Toronto, she says she never saw herself represented in mainstream fashion, which inspired her to start her own label.

“The message [behind the name] really is even though we may be flawed to some, we are high fashion,” Ruddock said in a video interview with the brand. “And we’re here to prove it.”

Not only did Ruddock take home the prize money, she also secured a feature in SheIn’s Fashion Week showcase, where she presented ’90s-inspired designs like puffer coats and bomber jackets.

Her win is even more inspiring given the pressures of lockdown, which saw several established designers shutter or scale down their business.

Siriano says, for young designers, the lockdown presented “a great opportunity for them to not give up.”

“That was why it was a really great experience filming,” he says. “It helps you remember why you love doing the job.”