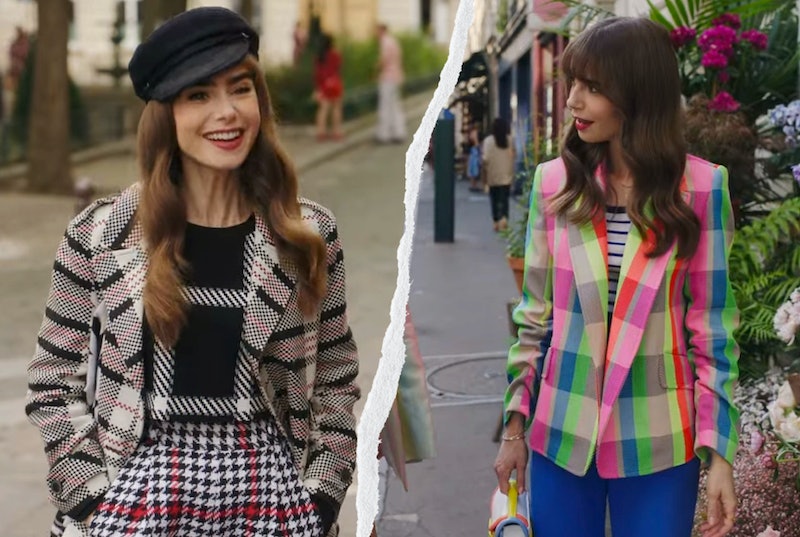 Just in time for your holiday weekend, Season 3 of Emily In Paris has arrived. Lily Collins is back as her impeccably-dressed character Emily Cooper — and this season, she served up more fashion than seasons 1 and 2 combined.

The show’s costume designer, Marylin Fitoussi, has taken over as the costume director for season 3. Fitoussi took the helm from Patricia Field (the genius behind the SATC wardrobe), who served as co-designer in Season 1 and consulted on Season 2.

In an interview with Fashionista, Fitoussi said that she intentionally incorporated up-and-coming French designers in Season 3 to show Emily’s growth as an expat. Though, Emily wouldn’t likely have an all-designer wardrobe in real life (especially when factoring in her estimated cost of living and gorgeous Parisian apartment), it does make for some incredible fashion moments.

According to a press release from luxury retailer N. Peal, Emily spends an estimated over $155k (a whole six figures) on her wardrobe alone annually. These figures are backed by sartorial evidence, as Emily reguraly rocks designers like Jean Paul Gaultier, Miu Miu, Junya Watanabe, Dries van Noten — not to mention, lots of vintage pieces.

Because of Emily’s beloved style, the hit Netflix show has broken search records, ranking second in Google searches in 2022, according to a study conducted by fast fashion retailer Boohoo. And with looks like these — neon plaid blazers, feathered mini dresses, that sunny Prada bag — this season is likely to break records too.

Ahead, I’ve rounded up all the best, most glitzy, colorful, flamboyant looks Emily wears in Season 3. Enjoy!

More like this
'Emily In Paris' Lucien Laviscount & Lucas Bravo Owned Paris Fashion Week
By El Hunt
15 Of Carrie Bradshaw’s Best Handbags From Sex & The City
By Dominique Norman
Looking Back At Kylie Jenner's Best Fashion Week Looks
By Allie Fasanella
All Of Doja Cat’s Wildest Paris Couture Week Looks
By Dominique Norman
Get Even More From Bustle — Sign Up For The Newsletter
From hair trends to relationship advice, our daily newsletter has everything you need to sound like a person who’s on TikTok, even if you aren’t.