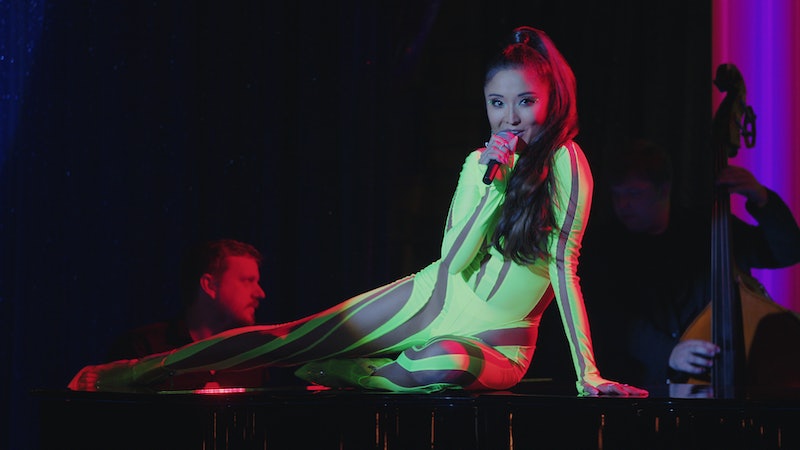 The escapist charm of Emily in Paris is the product of several elements: the perfect fashion, the beautiful people, the seemingly limitless personal budget to spend on anything and everything Paris has to offer. But it’s also the way Emily and co. constantly have access to live music and fun, French covers courtesy of Ashley Park’s Mindy.

The Tony-nominated actor proved her musical chops in Broadway shows like The King and I and Mean Girls before being cast as Mindy Chen — and, yes, it’s really her singing on the show. “My favorite thing to do is interpret songs that are well known and make them my own,” she told Vogue last year.

This time around, Mindy’s songs on Emily in Paris Season 3 include several hits from female vocalists, such as Dua Lipa’s “Don’t Start Now” and Lady Gaga’s “Shallow.” The latter, which appears during Episode 5, features both French and English lyrics — and according to Netflix, Park only had 12 hours to learn the translation. Fortunately, it all worked out, and the performance of “Shallow,” which takes place during a tense moment for Mindy and her beau and bandmate Benoît, is one of the most memorable musical moments of the season.

Of course, there’s plenty more where that came from — ranging from non diegetic soundtrack bops, to an unexpected moment where Lily Collins takes the stage herself, singing “Alfie” (from the movie, Alfie) as a sweet ode to her onscreen beau of the same name.

Collins told Extra TV that she was nervous about the prospect of singing as Emily, because her bestie (onscreen and off), Park, is a “phenomenal” singer herself. However, Collins found a way to separate her nerves from the task at hand. “I, right off the bat, said, Emily and Lily are not Mindy and Ashley,” she explained. “Like, we have to make sure that there’s a huge difference there. Emily’s not going to be trying to be Mindy. If she sings, she’s singing for a purpose of stepping outside her comfort zone. Of this kind of, gut-wrenching vulnerability — and character-driven.”

Here’s a breakdown of all the songs on Emily in Paris Season 3, and when you can expect to hear them in the season.

The Emily In Paris Season 3 Music

Episode 1, “I Have Two Lovers”