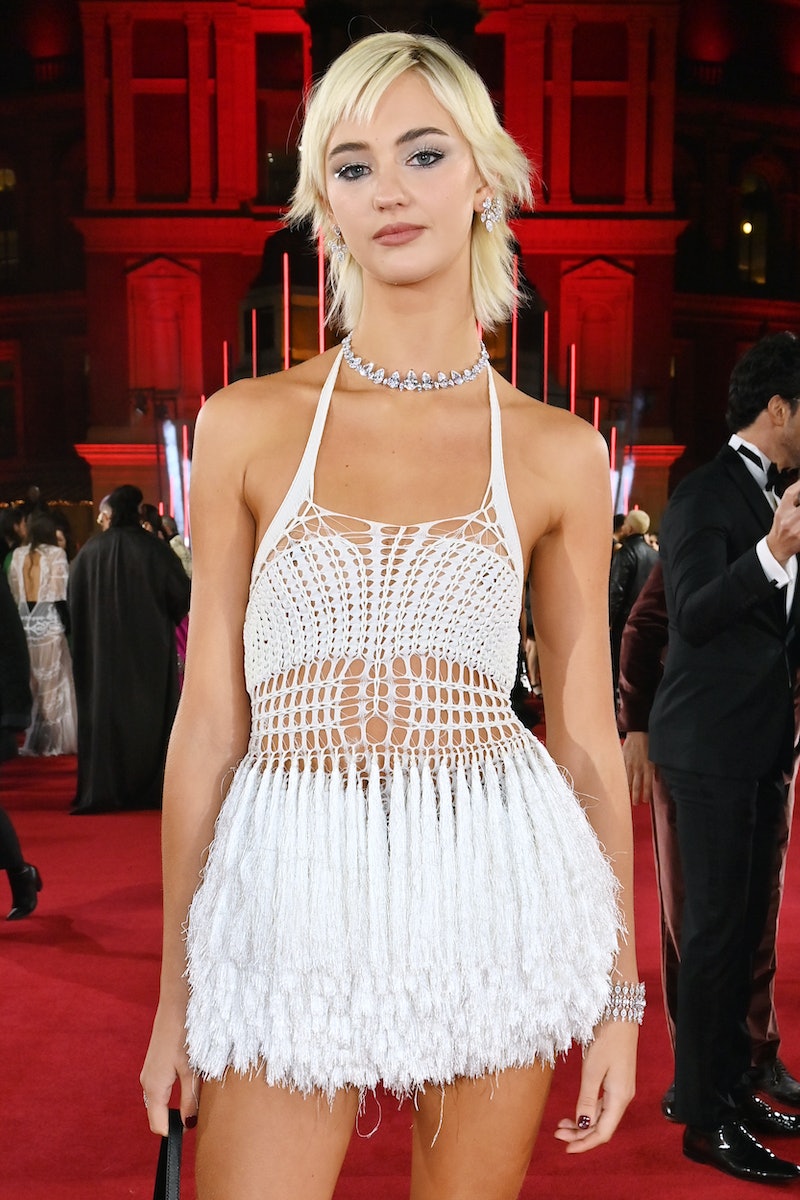 If you thought beauty’s love affair with the ‘70s was a fleeting trend, think again. The decade which gave birth to shags and bottleneck bangs continues to influence today’s fashion elite, with Mia Regan’s statement-making British Fashion Award appearance securing the ‘The Mixie’s’ status as the go-to style of cool-girl celebrities.

However, if the recent refreshes of the style are anything to go on, it looks like the statement-making shades will take The Mixie into another dimension. Think a flaxen-haired Zoë Kravitz on the cover of GQ’s Men Of the Year Issue, for example, or a peachy, rose-toned Emma Corrin for The Cut.

Just like Kravitz and Corrin, Regan seems to have got The Mixie 2.0 memo when she underwent her own dramatic colour change courtesy of the team at Larry King Hair. Before the influencer’s red carpet appearance, stylist Lilli Bridger snipped her soft, 70’s shag into the hybrid style, which combines the elegant glamour of a pixie cut with the rock and roll attitude and length of a mullet.

The next phase of the transformation came form colourist Harriet Muldoon, who took Regan’s autumnal, cosy blonde strands into next season’s shimmering, bleach-blonde territory á la Gigi Hadid at Givenchy S/2 23, but kept things edgy with a side of shadow roots.

Regan’s adoption of The Mixie style comes as no surprise to celebrity hairstylist Jason Collier, who tells me that, for Mixie lovers like Florence Pugh (who sported the look during the summer), it’s all about expressing individuality.

“After almost a decade dominated by bouncy blow drys, it started to feel like people were morphing into one another; which explains why the runway returned to the fun, freedom, and flamboyance of ’70’s hair, which continues to influence gender neutral, statement-making looks like the Mixie,” Collier says.

If you’re inspired by this spate of cool girl hair transformations and tempted to explore shorter hair next season, Collier suggests you keep the look laidback and low-maintenance by asking your stylist for ends that are “tapered and razored out.”

Collier emphasises that The Mixie should be tailored to your features, as it’s designed to be a bespoke look that celebrates your individuality.

When it comes to dramatic shade shifts like Regan’s, experts stress that it’s a job best for the professionals. However, blondes tempted to try Corrin’s pastel look can give it a go by using an at-home formula such as Jerome Russell Bblonde Semi Permanent Blush Pink Toner, which promises to stay fresh for 16 washes. BLEACH LONDON Super Cool Colour range is also a great option for anyone looking to test the waters before making a colour commitment. It’s a non-permanent colour cream mask that gradually fades out after a few washes.