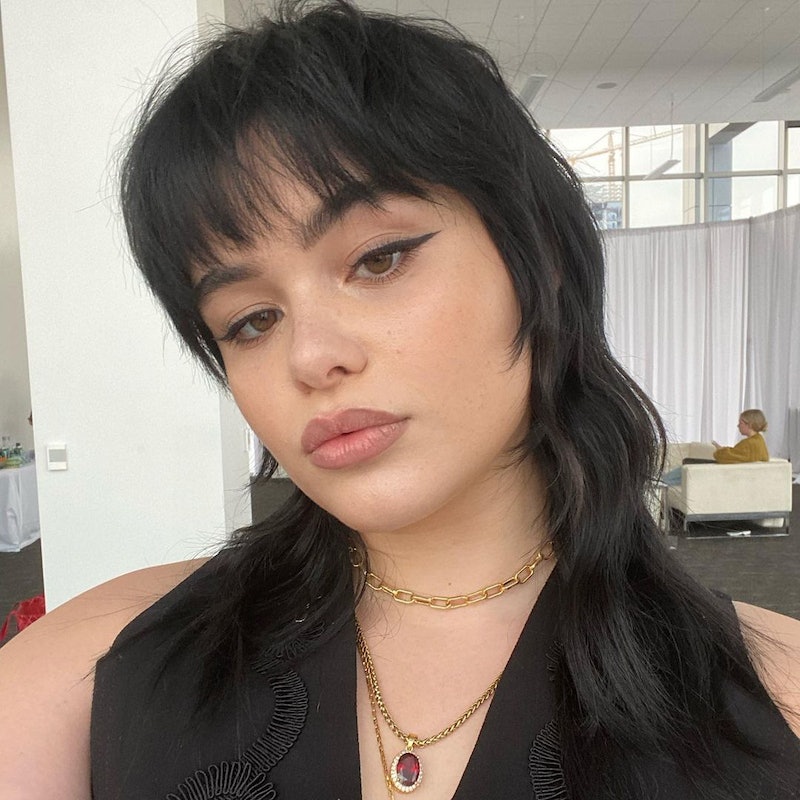 Back in the ‘80s, the mullet was synonymous with the era’s leading men like Billy Ray Cyrus and Lionel Richie before it fell to the wayside. That is... until now. The hairdo has made a strong comeback, and it’s chicer than ever. If you’ve already made the chop or are considering it for yourself, Bustle spoke with the pros for intel on how to style a mullet.

Out of all the hairstyles that exist in the world, the mullet seemed like it’d be the one trend that wouldn’t have a resurgence — it was just way too easy to associate it with “Achy Breaky Heart” and Road House. But a new class of celebrities has recently proven that the once-polarizing cut can indeed be modern and cool. Just look at Maisie Williams, Rihanna, and Miley Cyrus (like father, like daughter).

“The mullet has evolved from the shag and wolf haircuts we’ve seen trending in past seasons,” says celebrity hairstylist Justine Marjan. “It’s an extreme example of a cut with lots of layers that maintain some length.” Her take on the sometimes polarizing hairstyle? The modern version allows you to have the best of both worlds: “Face-framing, easy to style hair with some length to play with,” she tells Bustle.

The pros say the cut actually works on all different hair types, too. “The mullet can be great for straight to curly hair, and for all different thicknesses,” says Kylee Heath, celebrity hairstylist. That’s mainly because it’s customizable. “The haircut can be tailored to your head shape, hair texture, and thickness,” Heath adds, pointing to the many long and short versions of the look. “There are so many variations to the mullet, whether it’s keeping the back and the front much longer than the rest or doing a more subtle version by just slightly keeping the nape of the hair longer,” says Kat Thompson, a Los Angeles-based hairstylist.

That said, both Marjan and James Johnson, a celebrity stylist, note the mullet works better on hair that has a lot of texture. "A mullet is suited with texture,” Johnson tells Bustle. “The more undone movement, the better.” Marjan adds that wavy hair types work particularly well with a mullet since you've already got built-in texture, which makes it easy to style.

If you’ve already gotten the chop, congrats! Now it’s time to learn how to style your mullet. Below are the five golden rules, straight from the experts.

Because the mullet is made up of so many layers, it thrives when you simply air dry it. But if you want to hit up your blow dryer, that’s fine too. Heath recommends using a diffuser if your hair is curly. “While your hair’s wet, place the curls where you want them to live and diffuse them,” she says. Pro tip: “Try not to touch and fuss with it too much to keep the curls intact once dry,” says Heath.

The most important part of mullet stying is dealing with the short pieces that make up the pseudo-bangs. “Make sure that the frame around your face is exactly how you want it,” says celebrity hairstylist Annagjid "Kee" Taylor. “That bang piece has to be perfect for you — it really makes or breaks the style.” As such, it’s the area that will need the most TLC.

Pro tip: “Use a styling product to pull out and twist pieces around the face,” says celebrity hairstylist Sally Hershberger. The pieces framing the face should be long enough to be finger curled, which Kee recommends for the bangs.

3. Amp Up The Texture

Once you’ve perfected your fringe, working with the rest of your mullet is relatively easy. Hershberger says the differentiating lengths of the cut do most of the work for you, so it’s truly a low-maintenance style. The general philosophy? “Less is more — you don’t want to over-style it,” she tells Bustle.

That said, the mullet thrives with texture. To zhuzh the volume, Hershberger says to start by running dry shampoo throughout your hair, then apply a shaping balm or pomade all over. “This is to achieve the piece-y texture that gives you a rock n’ roll, cool edgy look,” she says. Heath also recommends straight hair types to use styling or spray wax to add texture, or a curl-enhancing cream if your hair’s curly. And, if you really want to make sure everything stays in place, Kee suggests using a small flatiron and holding spray to perfect the little pieces.

4. Seal It Into Place

To ensure your perfectly styled mullet stays exactly where you want it, spritz it with some holding spray. “Finish with something like the Tresemme Extra Hold Hairspray,” Marjan suggests. If you need, you can always throw a hairspray or volumizing spray into your bag for a little zhuzh on the go.

It’s always a challenge — with any haircut — when your ‘do grows out. But both Kee and Hershberger say the key to maintaining your mullet is to continually trim it. “Keep getting a trim if you aren’t looking to grow it out so quickly,” says Kee. And, according to Hershberger, you can keep your hair looking blended as it grows out by cutting the bottom layers. Long live that shag.