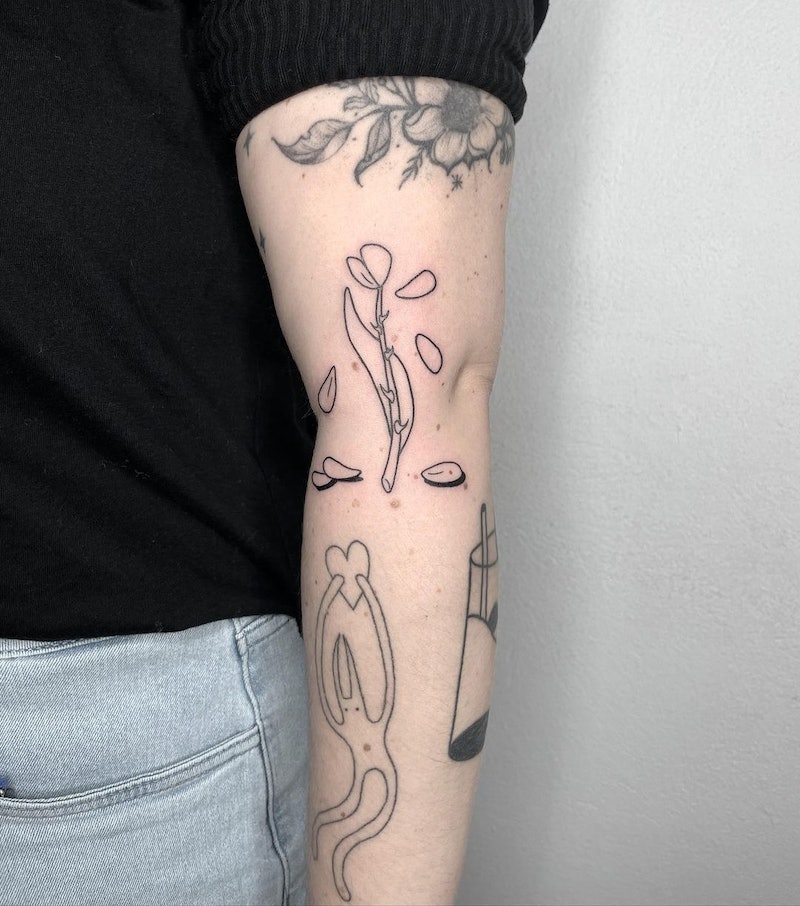 You may have stumbled upon someone — IRL or on social media — with a collection of seemingly random scribble-like tattoos on their arms and legs, like a cute dolphin, a slice of pizza, a flower, a random sentence — or all of the above. This patchwork style of ink is known as “ignorant”, and it’s a tattoo trend beloved by celebs like Harry Styles, Dua Lipa, and Emma Chamberlain.

Ignorant style tattoos are simple designs that often look like doodles. The more you can scatter across your body, the better. According to Kasia, a resident artist at High Hopes Tattoo in Bushwick, Brooklyn, this type of tat is believed to take inspiration from the ’90s-era graffiti artist Fuzi, who initially brought the scrawling art to the streets before expanding to the world of body art.

Ignorant tats are a purposeful step away from more standard designs, like traditional, realism, or new school. Unlike beautiful portraiture or hyper-real images, “ignorant style tattoos are somewhat simplistic in nature,” says Aja-Noelle Poe, a tattoo artist with Ephemeral. “They don’t have real shading and are mostly made up of crude line work or simple line work.” And that’s totally the point.

Rather than discrete placements like behind the ear, ignorant tattoos look best when they’re out in the open. “I usually see them in places that are in plain view, like the arms, neck, legs, thighs,” Poe tells Bustle. “Sometimes they’re on the ribs, but people mostly want them to be visible to show them off and have them serve as a conversation starter.” Keep scrolling for a closer look at the body art trend that’s taking off in 2023.

More like this
The 9 Best Vagina Hygiene Products, According To ShowerTok
By Carolyn Steber
How To Curl Your Hair With Leggings, According To TikTok
By Carolyn Steber
An Honest Review Of BeautyTok's Beloved Sleepy Tie Hair Tool
By Rebecca Strong
How To Fix (& Prevent) Cakey Makeup, According To A Makeup Artist
By Olivia Rose Rushing
Get Even More From Bustle — Sign Up For The Newsletter
From hair trends to relationship advice, our daily newsletter has everything you need to sound like a person who’s on TikTok, even if you aren’t.