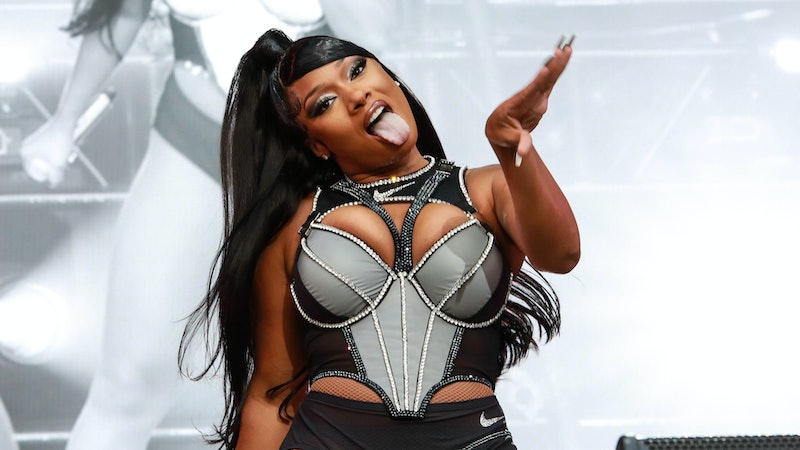 Halloween is right around the corner, and it looks like resident hot girl Megan Thee Stallion is already celebrating in fiery fashion. The “Body” rapper attended pal Cardi B’s 29th birthday party on October 12 and, like the other attendees, stunned in a spectacular dancehall-inspired look to fit the night’s theme.

She wore a red, lacy and distressed two piece with an auburn wig that looked absolutely stunning. To complement the fit, she wore lots of gold chunky chains, one of which connected to gold body chains she wore on her waist and hips. But of the many accessories she wore to the birthday bash, one was especially eye catching: her manicure.

Megan loves to play around with her acrylic sets, and this time, she took her nail art game to a whole new spooky level. To completely her flaming ensemble, the rapper wore long, clear nails with blood-red strokes and dots placed in chaotic harmony. The details created an abstract look that deserves to be in a museum (or a horror movie, TBH). Megan showed off her manicure in an Instagram carousel alongside nine other pictures of her look and the star-studded party.

This is just one of several Halloween-themed manicures that Megan has shared recently. Last week, the “Savage” rapper posted four out-of-this world looks that showed her excitement for this year’s frightful festivities. See those below if you’re feeling inspired.

The first set was all white with a twist — red drips decorating the tips of her forefinger and pinky, plus, a mix of square and stiletto-shaped nails.

The star’s second acrylic set was blue and black with x-ray images of a skeleton.

Another standout: Her multicolored nail art that featured bulging, bloodshot eyes in the middle of each nail.

Megan’s last manicure that would be perfect for Halloween is an ode to the Marvel character Venom.

If this is Megan The Stallion two weeks before Halloween, fans can’t wait to see what costume —well, probably costumes, because she surely won’t serve just one look — and beauty she wears for the actually holiday. Guesses are it’ll blow this nail art, and the manicures she shared last week, out of the water.