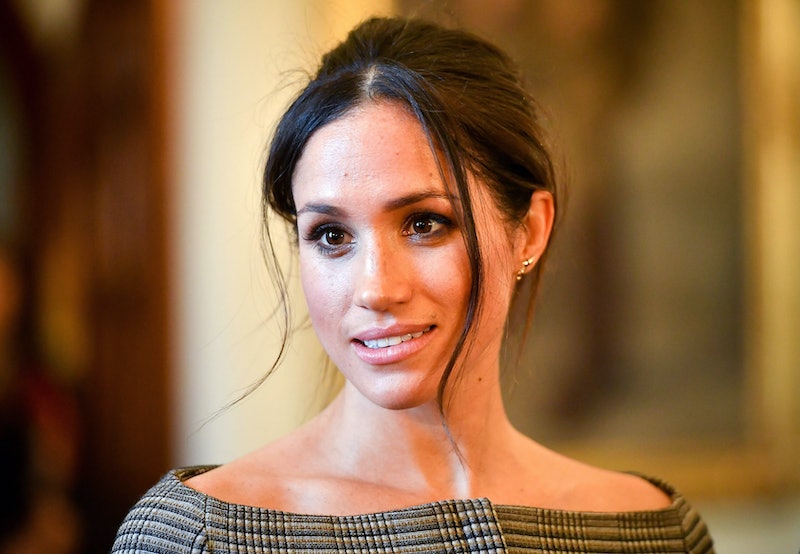 Prince Harry and Meghan Markle were featured as part of the Time 100 special on Tuesday night, marking their first US television appearance after stepping down from their royal titles. And they’ve made the most of their time on-air, urging the country to get out to vote during this year’s election — now more than ever.

For the appearance, Markle chose an understated look that was equal parts tailored and casual. Sitting on a bench in the middle of a tree-lined lawn, she donned a pair of ankle-cropped trousers from Alexander Wang, a silk top from Victoria Beckham, and a pair of classic Manolo Blahnik BB suede heels.

Markle often perfectly balances timeless wardrobe staples and of-the-moment trends, and this particular appearance was no exception to the rule. In fact, the top she slipped into was the exact shade of burnt red that was featured all over the Fall 2020 runways from the likes of Lanvin, Stella McCartney, and — yes —Victoria Beckham.

Emphasizing the importance of voting, the couple shared, “As we approach this November, it’s vital that we reject hate speech, misinformation and online negativity.” They added, “Now we're just six weeks out from Election Day, and today is National Voter Registration Day. Every four years, we are told the same thing, that 'this is the most important election of our lifetime. But this one is. When we vote, our values are put into action and our voices are heard. Your voice is a reminder that you matter. Because you do. And you deserve to be heard.”

You can watch the Duke and Duchess of Sussex’ poignant message below.