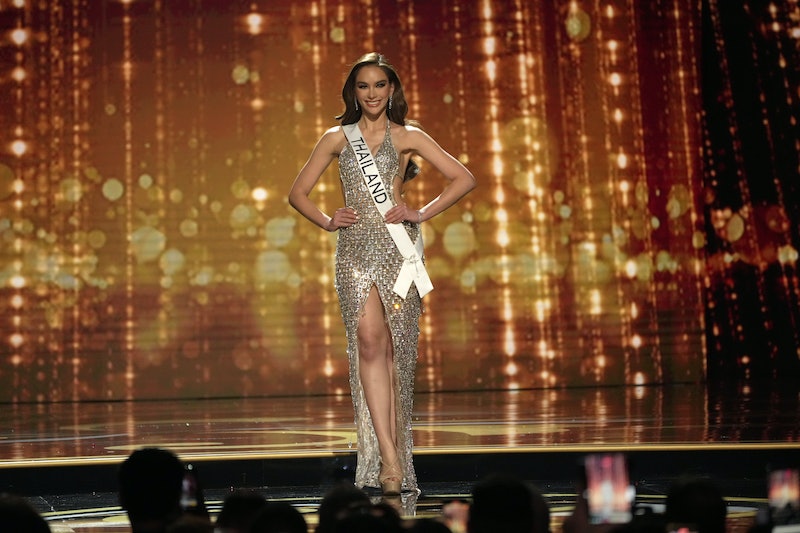 Miss Thailand made a fashion statement in more than one way at the 2023 Miss Universe Pageant. During the evening gown competition in one of the international competition’s preliminary rounds, Anna Sueangam-iam wore a dress made of soda tabs, among other materials, for a special reason. Sharing three photos on Instagram, the beauty queen explained that her glam metallic look was inspired by “the familiar surroundings” of her childhood.

“Growing up with garbage collector parents, my life as a child was among piles of garbage and recyclables,” she explained in the caption of her Jan. 12 post, which had racked up more than 234,000 likes as of publication. “This unique gown was purposefully tailored-made with discarded and recycled materials, namely the ‘Can Tab’ to present to the UNIVERSE that what’s considered worthless by many actually possesses its own value and beauty. Thank you all for seeing it, hearing it, and hopefully being that message of self-worth.”

In her Miss Universe delegate bio, Sueangam-iam said she was “born and raised in a slum” in Bangkok and grew up among Buddhist nuns. Her meals consisted of leftover food from the monks “which most people would consider waste,” but she credits the hardship with helping her “grow up and survive childhood life.” To cover her school tuition fees, she would donate blood, collect plastic waste bottles, and clean public restrooms.

That wasn’t the only sartorial statement Sueangam-iam made, either. During the swimsuit competition, Miss Thailand added a “meaningful cape” to her look, explaining on Instagram that the accessory represented her “beloved country” and sent a message of the “power of unity.” In another social media post, she also shared the story behind the “Thai national costume,” writing that her traditional gown was inspired by Kimita Devi, one of King Kabilaprom’s seven goddess daughters. She also carried a silver bowl to showcase “the way of life, culture, tradition and local wisdoms,” adding, “It reflects the bliss, love, humility and beauty of the Thai culture passed down from generation to generation.”

Though Miss Thailand didn’t make Miss Universe’s Top 16 finalists, she won the pageant’s Social Impact Award. Sueangam-iam’s commitment to environmental issues is something she had in common with Miss United States R’Bonney Gabriel, who was ultimately crowned the 2023 winner when the competition concluded in New Orleans on Jan. 14. (The Dominican Republic’s Andreina Martinez Founier earned the second runner-up title behind first runner-up Amanda Dudamel of Venezuela.) The first Filipino-American to win Miss USA, Texas-born Gabriel is an eco-friendly fashion designer with her own sustainable clothing line.

During the pageant’s Q&A round, Gabriel explained how she would work to demonstrate Miss Universe is “an empowering and progressive organization” if she were to win, according to USA Today. Responding that she would be a “transformational leader,” Gabriel cited her work using recycled materials in her fashion design and teaching sewing to survivors of human trafficking and domestic violence.

More like this
Every Single Thing In Maya Jama’s 'Love Island' Wardrobe
By Darshita Goyal
15 Of Carrie Bradshaw’s Best Handbags From Sex & The City
By Dominique Norman
'Bachelorette' Vet Clare Crawley Unveiled 2 Special Wedding Day Accessories
By Stephanie Topacio Long
Beyoncé Wore A Golden Sheer Gown At Her VIP Dubai Concert
By Sam Ramsden
Get Even More From Bustle — Sign Up For The Newsletter
From hair trends to relationship advice, our daily newsletter has everything you need to sound like a person who’s on TikTok, even if you aren’t.