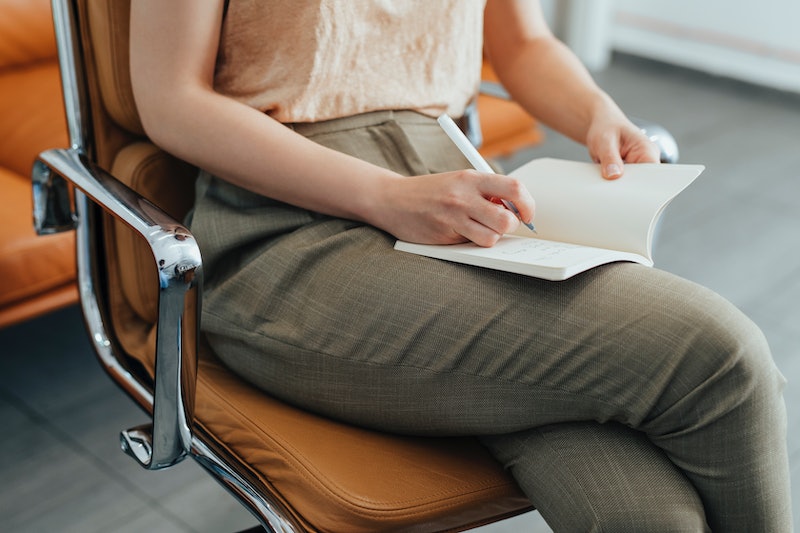 Even if you’re an underwear-every-day kind of person, there will come a moment (maybe when you forget to do laundry) that’ll see you venturing out sans underwear. As a cool breeze blows and you move through the world unrestricted, you might even start to wonder why you haven’t been going commando all along. Add in the many benefits of not wearing underwear, and who knows? You might choose to skip this part of getting dressed more often.

That said, there are plenty of reasons why and occasions when wearing undies is a good idea. “Underwear is a barrier between the vagina and clothes,” Kameelah Phillips, MD, a NYC-based OB/GYN, tells Bustle. “It protects clothes from vaginal discharge and blood,” while also protecting your vaginal area from irritation. (Anyone who’s worn tight jeans without underwear will know this very specific type of pain.)

It may also be possible to strike a nice balance between wearing unbreathable synthetic panties and not wearing anything at all. If you find a comfortable pair of cotton underwear, it will help protect your skin, hold a pad or panty liner in place, and also allow the vaginal area to “breathe.” But if you’re curious about what happens to your body when you stop wearing underwear — either on occasion, while you sleep, or every single day — read on below.

If you’re sensitive to underwear that bunches up, twists, or itches along the seems, you may want to experiment with different brands, cuts, and styles — or skip them entirely and see how it feels. For many people, “the first and most obvious benefit of not wearing underwear is comfort,” Brittany Noel Robles, MD, MPH, CPT, an OB/GYN physician, tells Bustle.

If you go commando in a pair of loose pants, soft leggings, or a long dress the difference can be life-changing. Same goes for tossing your undies aside before bed.

2. Air Can Flow Freely When You Stop Wearing Underwear

Underwear — especially the kind made of synthetic material — prevents air from flowing freely. “By going commando you give the labia and vagina time away from fabric,” Phillips says.

Often, this is referred to as letting the vaginal area “breathe.” As Phillips says, “The concept of ‘breathing’ just speaks to the fact the vagina can be a sensitive area for some [people] and increased contact with moisture and clothing can increase this sensitivity.” Not everyone has to let their vagina breathe, she says, but for some folks it feels right.

Not wearing them is, however, a creative way to relieve dampness by allowing time for the vaginal area to release excess heat and moisture. If you’re someone who experiences a lot of sweat and discharge, this can be a godsend.

It’s all about figuring out the right combo of clothing for your needs while factoring in where you’re going and what you’ll be doing during the day. “Not wearing underwear while wearing a loose, long dress may help [keep you dry],” Gersh says. “Simply skipping underwear, but wearing fitted pants, would serve no purpose.”

Now, about that excessive warmth and moisture between your legs, trapping it all against your skin may contribute to an overgrowth of microbes, Purvisha Patel, MD, a board-certified dermatologist, tells Bustle. And that can result in heat rash and irritation.

A heat rash occurs when blocked pores trap perspiration under your skin leading to a superficial blister or a red bump, as well as a prickly or itchy sensation. Heat rashes go away on its own but it can be prevented if you keep your skin cool and dry.

Another potential side effect of heat and moisture is folliculitis, Patel says. While it can look a lot like acne or pimples, folliculitis is actually a very common skin condition that causes your hair follicles to become inflamed with red and white bumps.

The itchy rash is most likely to form along your bikini line, especially if you shave and then pull on a pair of tight or scratchy underwear. While there are many ways to help prevent and treat folliculitis, like applying a warm compress, it may also help to avoid wearing underwear so the area doesn’t get extra irritated.

Wearing tight underwear can also lead to vaginitis, Robles says, which is one of the most common causes of outpatient gynecological visits. “Vaginitis is often due to a vaginal infection such as a candida yeast infection.”

A vaginal yeast infection causes itching as well as a thick, white discharge that looks like cottage cheese. Another common type of vaginitis, known as trichomoniasis, causes similar symptoms but has a greenish-yellow discharge that may appear “frothy.”

7. It Plays A Role In Preventing Bacterial Vaginosis

A third type of vaginitis, known as bacterial vaginosis or BV, may be a little less likely to form if you wear breathable underwear and/or give the vaginal area a chance to air.

BV is a vaginal infection that causes burning when you pee, a grayish-white vaginal discharge that often smells “fishy,” and itching. It can occur if there’s a change in the normal balance of vaginal bacteria.

Many lifestyle changes, including not wearing tight underwear or going commando while you sleep, may help prevent these infections from forming. If you spot any of these symptoms, let a doctor know.

If underwear traps sweat and moisture throughout the day, then you can only imagine how irritated things will be when you’re working out. If you’re someone who chafes easily, try exercising without undies, just to see if it makes a difference.

You might notice that it reduces chafing due to the lack of friction between skin and fabric, especially if you wear looser shorts or sweatpants so the air can flow. But it’s obviously a personal choice and not a cure-all for everyone.

You may find that wearing underwear actually helps absorb or wick away sweat and keeps you more comfortable. Whatever you wear, Phillips recommends removing it immediately after a workout since staying in sweaty, moist clothes can increase your risk of vaginal infections.

9. Not Wearing Underwear Lowers Your Risk Of Fungal Infections

Another side effect of excess moisture and heat? Fungal infections, particularly one called tinea cruris, Gersh says. Tinea cruris, also known as “jock itch,” tends to crop up in the groin or inner thighs and may be shaped like a ring.

As its name suggests, the infection can be incredibly itchy, Gersh says, much like a vaginal yeast infection. Treatment usually includes cleaning and drying the area and applying on an anti-fungal cream.

10. Going Commando Gives Your Skin A Break From Harsh Chemicals

It's not the most obvious benefit, but skipping underwear — even if you just do so occasionally — can give your labia and vagina a nice break from the various chemicals that stick to your clothes after washing, Phillips says. Whether it’s leftover detergent or a fine film of fabric softener, it can all irritate your skin.

That said, wearing underwear can also protect you from these very same chemicals in your pants, so it really is a toss up. As Phillips says, "Wearing underwear protects your labia from direct contact with clothes that can be abrasive, have dyes, or chemicals that can irritate you.”

If you get rashes or are sensitive, it’s worth experimenting. Remember, this whole “no underwear” thing is all about finding what works best for you.

It’s definitely possible to wear underwear that’s so tight it cuts off your circulation, at least to a small degree. If yours are too small or the elastic is too tight, “you will notice imprints in the skin and around the inner thigh,” Phillips says.

“Major circulation issues aren’t common,” she adds, because the discomfort will be enough to make you take them off before any damage is done. But it’s important to keep this issue in mind if you tend to wear underwear that’s super restrictive.

This article was originally published on Aug. 26, 2016