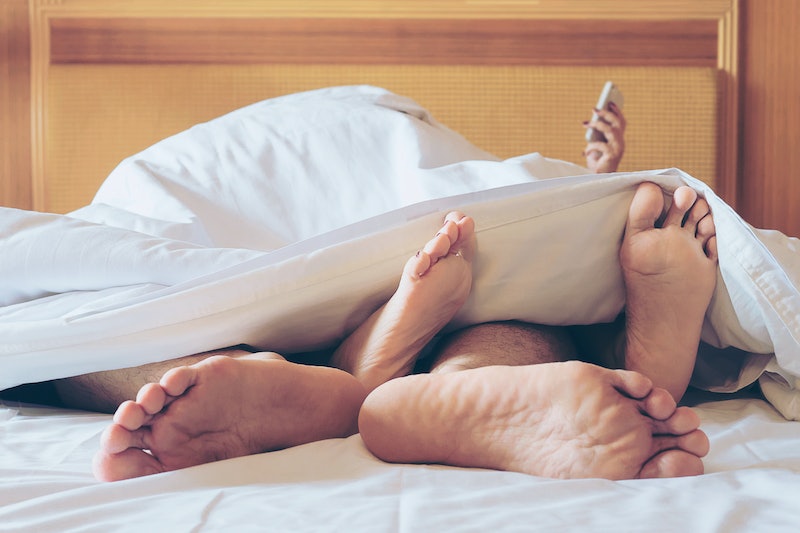 While it's always nice when a partner finishes with a bang, it's OK if they can't come during sex 100% of the time. Not being able to orgasm is something that happens to pretty much everyone on occasion, usually as a result of fatigue, stress — or simply not being in the mood.

If your partner often struggles to finish, however, it might point to something called delayed ejaculation, or DE, Dr. Jenni Skyler, PhD, LMFT, CST, the resident sexpert at Adam & Eve, tells Bustle. This means that sustained stimulation — like sex or a blow job — doesn't increase their arousal levels, Skyler says, or result in an orgasm at all.

It isn't always a big deal, but DE can start to have an impact on your relationship, as well as you and your partner's self-esteem. "We have sexual scripts in our subconscious that often internalize a feeling of failure if sex doesn't fit society's definition of ideal or 'normal,'" Jessica Cline, a board-certified sexologist, sex therapist, and relationship expert, tells Bustle. So as you move into the 45 minute mark — and nothing seems to be escalating — you might start to think you're "bad at sex." And your partner might start to think the same.

But try not to go down that road. A whole host of issues can affect a person's ability to orgasm, ranging from short-term problems to lifelong issues. Some of them have easy fixes while others may require a lot of work, but the important thing to know is: It's not anyone's fault.

So, What Qualifies As A "Delayed Ejaculation"?

For your partner's inability to finish to count as delayed ejaculation, your partner has to experience a "delay or inability to ejaculate during almost all partnered sexual activity for at least six months," Cline says.

While there is no set time cap, it commonly counts as a "delay" if they've been stimulated for about 30 minutes and still aren't finishing. To put that in perspective, "the average time interval for people with penises in stable relationships of sexual activity is five to six minutes," Cline says.

This isn't about being able to naturally last a long time, or trying to doing so on purpose. It's about wanting to finish and not being able to, to the point where sex starts to feel like a chore. If you and your partner are experiencing distress, Skyler says, that's when it officially a problem.

The 6 Biggest Causes Of Delayed Orgasm

While not being able to finish isn't always a sign of a health issue or other underlying concern, it never hurts to look into possible explanations for a recurring pattern. Here, the six main reasons why your partner can't come during sex, as well as the best ways to work through them.

Lots of common medications have sexual side effects, including delayed orgasm for people with penises and vaginas. SSRI antidepressants — like Prozac, Lexapro, Zoloft, Paxil, Celexa, and others — are notorious for messing with a user's sex drive, making orgasms difficult or even impossible to achieve.

Benzodiazepines, a class of drugs used to treat anxiety like Xanax, Klonopin, and Valium, as well as anti-psychotics like Risperidone can have similar effects. Many blood pressure medications, as well as other drugs used to control high cholesterol, are known to delay orgasms — or keep users from having any orgasm at all.

That said, a 2020 study published in Neurology, Psychiatry and Brain Research noted that 48% of patients experiencing sexual side effects continue to take their medication. But the study also acknowledged that new strategies to manage sexual dysfunction in patients taking antidepressants are needed.

What You Can Do: Encourage your partner to talk to their doctor. For some folks, switching to a medication with fewer sexual side effects is an option. But in many cases, the positives of taking antidepressants end up outweighing the negatives.

When that's the case, focus on adjusting. Keep talking and reassuring one another — especially since unrealistic expectations of what "should" happen during sex often make things worse. Rethinking your sex life, including whether penetrative intercourse needs to be the main dish every single time, can also help take the pressure off.

Even if your partner isn't taking medication, mental health issues can impact a person's sex life on every front, including in the orgasm department. Anxiety and depression can lead to delayed orgasms, which makes perfect sense when you think about it. If you're too depressed to complete simple acts of daily life, like brushing your teeth or going to the grocery store, the idea of having fun in bed will seem positively unachievable.

What You Can Do: Be there for your partner and offer to support them in seeking out psychological help, such as talk therapy. It can work wonders, both for their sex life and for their life in general.

Some chronic or autoimmune conditions, like multiple sclerosis, hypothyroidism, and diabetes, can come with a side dish of sexual dysfunction for all genders. Short-term health conditions, like UTIs and other infections, can also keep people from crossing the finish line.

What You Can Do: If a medical issue is impacting your sex life, it's often simply a matter of properly managing the condition as a way of eliminating DE. Encourage your partner to talk to their doctor about their health, as well as their sexual concerns. While it might feel embarrassing in the moment, it's well worth the conversation.

Performance anxiety often stems from intense societal expectations surrounding what a person "should" be able to do in bed — including how long they should last, how they should make you feel, etc. It's this pressure that might be what's preventing your partner from having a good time, Skyler says, and ultimately finishing.

In the same realm, your partner might also be experiencing negative thoughts about their body — ones that hold them back from feeling comfortable enough to fully enjoy sex. Whether it's their weight or penis size, it's possible they're ruminating about it the entire time, Skyler says, thus preventing themselves from letting go.

What You Can Do: Try not to make finishing — or even penetrative sex — the one and only goal. Instead, create a "pleasure-oriented mindset," Skyler says, where you focus on maximizing everything else. Have fun during foreplay, try out new positions or forms of sex — such as switching from oral sex to making out to playing around with a toy. Without a mutual orgasm being a final goal, you both might have more luck.

While the idea of make-up sex sounds kinda hot, the reality is relationship troubles — like arguments, tension, or unspoken feelings — can actually make it really tough to finish. "We need to feel safe enough to surrender into an orgasm with another person," Skyler says. So if something happened that caused a rift, this may be the reason why your partner isn't finishing.

What You Can Do: Talk, talk, and then talk some more. "Working on the relationship and creating emotional and sexual safety may help with DE," Skyler says. But if that isn't enough, look into attending couples therapy. With the help of a therapist, you may be able to figure out what's preventing connection, and that level of comfort and trust that's often necessary to orgasm.

More like this
7 Women Share Their Best Orgasm Stories
By Lexi Inks
Expert Tips For Being On Top When You're Plus-Size
By Lexi Inks
How Do I Deal With Both ED & Premature Ejaculation?
By Sophia Benoit
Are Quality Time & Physical Touch Love Languages Compatible?
By Lexi Inks
Get Even More From Bustle — Sign Up For The Newsletter

This article was originally published on Jan. 29, 2015