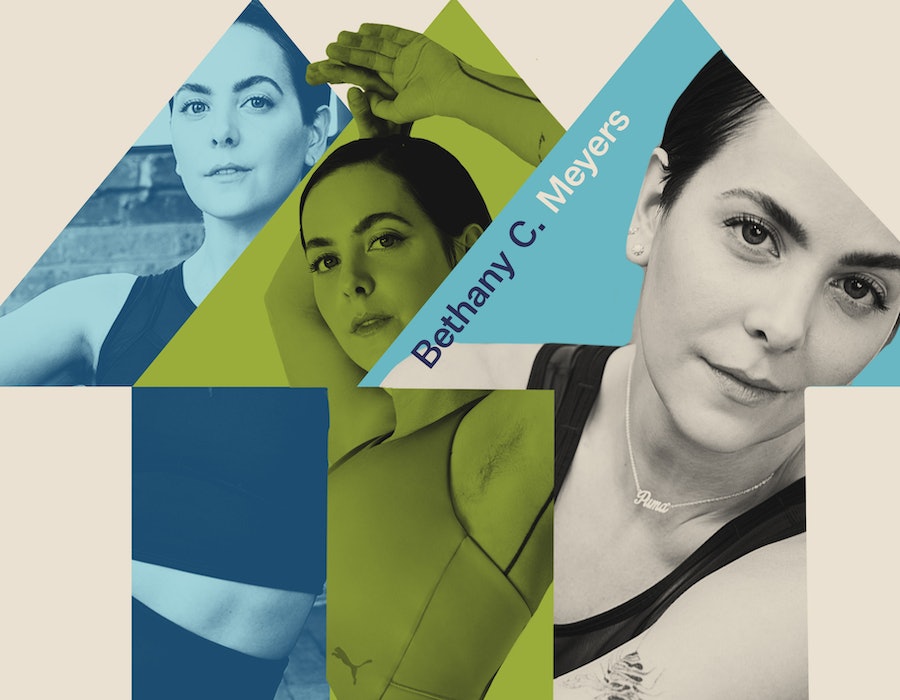 Laurel Golio/Shane LaVancher
By Kathleen Ferraro
November 23, 2021
The Level Up

In "The Level Up," changemakers in the fitness and wellness industries tell us how they're making an impact in their communities, from pushing for inclusivity to promoting body acceptance and so much more. Here, be.come project founder Bethany C. Meyers talks about the importance of detaching obligation from movement.

For most of their decade-plus working as an instructor, Bethany C. Meyers says they had a "fraught" relationship with fitness. While dealing with body dysmorphia and a severe eating disorder throughout their twenties, they exercised as a way to assuage feelings of guilt and shame about their appearance.

“Fitness is the only place we keep paying for something that we think we want — like a six pack — that we may not ever get,” Meyers, 35, tells Bustle. “I was so sick and tired of feeling that way."

That exasperation led them to found virtual fitness platform the be.come project in 2018. "I reframed the way that I was experiencing workouts [by] replacing the word ‘exercise’ with ‘movement,’ and I noticed how much healing it brought me,” they say. Today Meyers delivers this ethos through 25-minute low-impact routines, available for $35 a month; the flow of movements is meant to feel like a moving meditation. And since founding the be.come project, Meyers was named a Global Ambassador for fitness apparel brand PUMA in 2021; in this role, they work with the brand's Reform program to break down barriers that prevent LGBTQ+ people from engaging in fitness.

Between this ambassadorship and the be.come project, Meyers is pioneering a new approach to fitness. Below, they share how they’re working to make the workout industry more accessible and less intertwined with diet culture.

Tell me about how the be.come project came to be.

The be.come project came from me sharing what had helped me heal from my eating disorder because I really didn't see anyone else in the fitness space approaching movement from an angle that wasn’t weight loss.

When we started, I was talking to different business mentors and I said I didn’t want any before-and-after pictures or weight-loss talk. They said, “You're nuts. That’s not how this works, that’s not what fitness is. You can’t sell fitness without the promise of a different body.” I was like, watch me. Right away, people latched onto the idea.

What was one technique you used to adjust your approach to working out, personally?

I told myself I was not allowed to work out unless I could come up with a reason for working out that didn't involve something physical. It was really hard at the beginning because I couldn't think of any other reasons besides my appearance. But then I started to find myself really craving movement because I needed to clear my head, not because I needed to work off what I just ate.

How does the be.come project facilitate this approach to fitness for more people?

What I think is so interesting about the be.come project is that I’m not reinventing the wheel. A plank will always be a plank and a lunge will always be a lunge. It's how we show up to that movement and the words that we hear during it — like options for modifications that help you find what feels best for your body — that end up making a difference in how we consume it.

The be.come project takes an explicitly body-neutral approach to movement. Can you say more about what that means?

Some days we love our body, some days we hate our body, but every single day we respect our body. Body neutrality gets back to the fact that the body is just a body — what makes us up is so much more important, but there's always such an emphasis on the physical self.

Given how intertwined fitness and physical appearance are, how can people who are new to fitness develop a relationship with movement that doesn’t have to do with looks?

Fitness has been deemed something for rich, white, thin people. Movement should be available to so many more people, but a lot of people have a hard time getting started because they don't know it's available to them. I've been in fitness for 15 years, but I'm super intimidated to go to a gym — it's not a culture I love.

So I think a great first step is to find a place where you, your body, and your needs feel supported. Home, for a lot of people, is our safe space, and lockdown spawned at-home fitness. People also tend to think that if it wasn’t an hour-long, sweat-drenched workout, then it doesn’t count. I don’t believe that at all — there’s a lot of value to five minutes of movement because it can bring joy.

If people walk away from the be.come project knowing one thing, what do you want that to be?

That movement is not punishment.