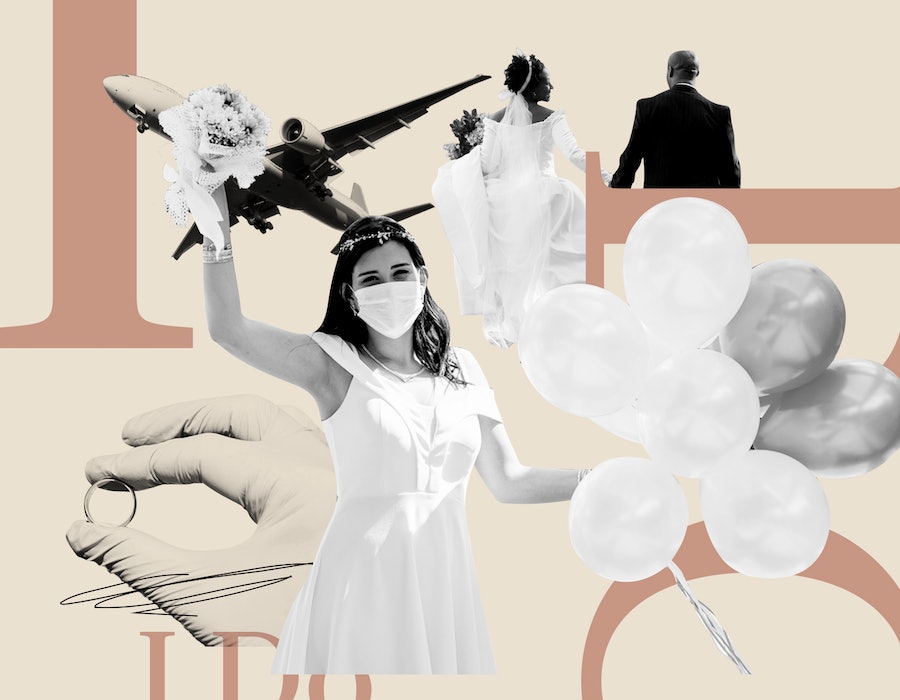 Coronavirus canceled and postponed so many weddings plans. According to a 2020 The Knot survey of 527 American couples, 93% of engaged couples are postponing or modifying their original wedding plans during quarantine. But even a pandemic couldn't keep these three couples from the ones they loved. Here's what happens when you choose to elope during the COVID-19 pandemic. As told to Emma McGowan.

We live in Nebraska but planned a wedding in Vail, Colorado. We were going to do a 75-person wedding on the top of a mountain, so it wasn't big to begin with. Everyone was going to have to fly or drive in, because none of our people are in Colorado.

When COVID hit, I didn't even think it was going to be canceled. My first thought was, “Oh, crap — no one's going to be able to buy their bridesmaid dresses or get their suits fitted.” Then we started to worry about what would happen is someone actually got sick at our wedding. Having that be a part of the day would be horrible. Even the energy of people being worried that they could be sick was not something we wanted on a happy day. And then, things just kept snowballing and getting worse.

By May, it was clear that the wedding wasn’t going to happen. Not only was there a travel ban from Argentina, where my husband Ivan is from and where his family would have to fly from, but I got a call from the venue saying that my wedding planner and the salesperson I’d spoken with had both been furloughed. There was no one left for me to even to talk to.

I was really sad for about a month, but then in June I came across the option to elope online. I texted Ivan and said I didn't want to wait another year. He suggested we do it on the three-year anniversary of our first date.

Originally it was just going to be the two of us, but then my mom was like, “Are you sure you don’t want me to be there? Who’s going to zip up your dress?” And I almost started crying. So everyone got tested for COVID and we had both sets of parents there.

We decided to do the elopement at Vail and it was perfect. We made breakfast with our families in the morning, and then my mom got me ready. She was my hairdresser, makeup artist, bridesmaid, maid of honor — everything. We took a gondola up to our spot on the mountaintop. The weather was perfect — 75 degrees and no humidity — and I remember thinking, “Awesome! My hair will actually stay curled.” I wore my wedding dress, which helped me feel better about the cost since I'll wear it again when we have a big party next year. My father walked me down the aisle in a walking boot, because he had a broken ankle. I say “aisle", but it really was a muddy dirt path.

I was just able to focus on us and our moment and really soak that up. It still feels surreal.

My wife Katrina and I met online in March. We live about two hours away from each other — she’s in British Columbia and I’m in Washington — and made a plan to meet up the first time. Normally that’s not a hard thing to do, but then the borders shut on March 21.

We ended up messaging and FaceTiming all day, every day. We even fell asleep together over FaceTime. It progressed into this amazing relationship, for being in different countries.

Then we started meeting at Zero Avenue on the border between Washington and Canada, each of us on one side of the border. The U.S. border patrol didn’t care, but Canadian Border Patrol had cameras following our every move and would get upset if anyone of the couples touched over the border. It was the only way we could see each other. It was the wildest thing we’d ever done, meeting at the border of two countries, and there were probably five other couples there doing the same thing. We met there as often as we could because I wasn’t working in the beginning of the pandemic.

Then in May, we found a loophole that would let us be together, at least for the time being — while Americans couldn’t fly to Canada, Canadians could fly to the U.S. So Katrina came down and lived with me and my daughter for 44 days. It was this temporary moment of bliss, because it was like we were living together. At the end of the visit, I drove her to the border and she walked over to a ride home waiting for her.

After that, we were trying to figure out how we could be together more permanently. We realized that the quickest way would be to get married and start the application process for a spousal visa. At the end of July, we flew to a little island off the coast and eloped with my mom, sister, a photographer, and an officiant. Katrina arrived on Thursday; we married on Saturday; and she went back on Tuesday to return to work. It was equally sad as it was amazing, because can't work in the States until the visa goes through.

Since we got married, we’ve been meeting up as often as we can in the Peace Park, which is on the border between Canada and the U.S. Originally all the parks on both sides were closed — including the Peace Park — but a treaty from 1814 made it illegal for either Canada or the United States to keep people from entering the park. So Katrina finds a parking spot, walks a couple steps to a little ditch, and walks over it. We meet up around 1 p.m. with a picnic and stay until the park closes at sunset.

Our relationship has so far proven that a virus and shut borders aren’t going to stop us from doing what we want to do. And she is an amazing wife. She’s the sweetest, kindest, so wholesome, and such a refreshing change from what’s going on. She’s giving me hope that things will get better.

My wife, Kelsey, originally planned a trip to propose to me on March 22. But when COVID hit, she proposed with a special handmade Clue board, because she knows it’s my favorite board game. We talked about getting married and having a whole ceremony and everything, but decided to elope because we couldn’t be sure about the timeline. We’re going to have a big wedding still, though, once this is all over.

My mom got ordained to be our officiant and we also invited my brother and a couple close friends, probably six to eight people. We were already interacting with them, like at work. We did it on a natural land bridge just outside Douglas, Wyoming, because it was beautiful, outdoors, free, and didn’t have a lot of people around.

I like to sew and do cosplay, so I made a dress last minute from this gorgeous teal satin and rainbow chiffon. Kelsey wore a rainbow bralette, black jumpsuit, and white shawl. And we both wore matching flats with rainbow text on them. After the ceremony, we took a two-day trip to Denver and did a little mini-honeymoon in a hotel there.

I’ve wanted to be married to her forever. We’ve actually been best friends since seventh grade, but didn’t start dating until about two years ago, because her parents don’t approve. But her parents are out of our lives now and I just didn’t want to wait any longer.

This interview has been edited for clarity and length.

More like this
My Partner Wants Me To Wear A Diaper During Sex. Help!
By Sophia Benoit
18 Hinge Prompt Answers To Try If You’re Looking For Something Casual
By Lexi Inks
TikTok's Voluntary Celibacy Trend Has Sparked A Movement
By Lexi Inks
5 Signs You Have A Toxic Relationship With Yourself
By Lexi Inks
Get Even More From Bustle — Sign Up For The Newsletter
From hair trends to relationship advice, our daily newsletter has everything you need to sound like a person who’s on TikTok, even if you aren’t.