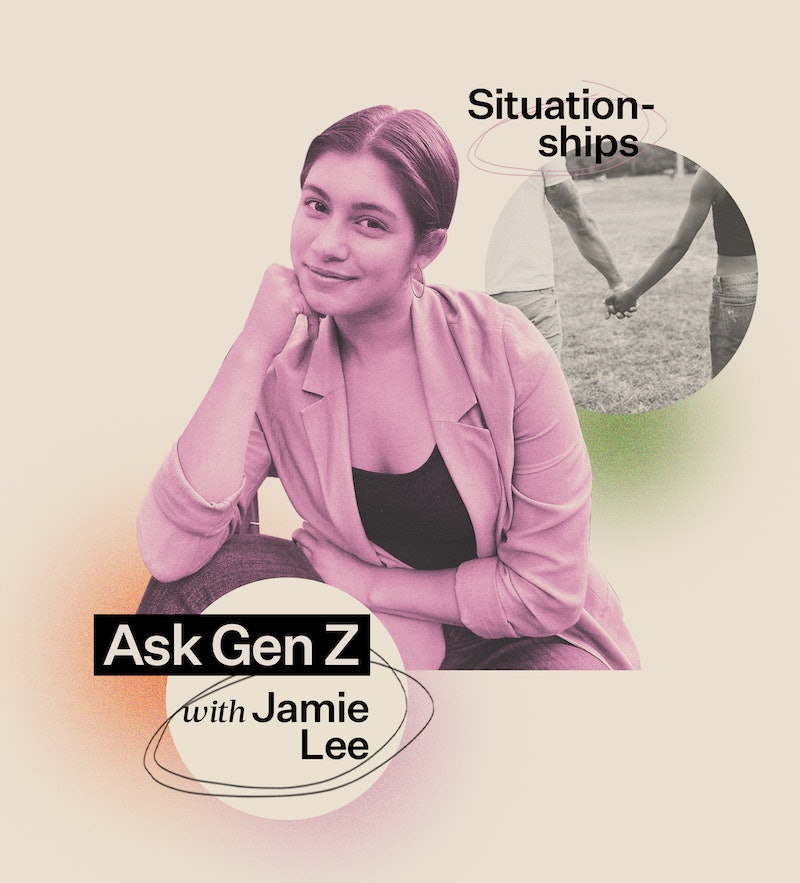 You probably didn’t mean to get yourself into an elongated hookup with no stated boundaries or expectations when your hot vax summer started. But now, you’re ready to meet cute strangers at bars, go on in-person dates, or even have an end-of-season vacation fling — you just have to figure out how to end your situationship first.

ICYMI, a situationship is the latest take on friends with benefits, where you’re not officially dating — but also not not dating. According to a 2021 Hinge survey of 4,772 users, 34% of daters reported being in a situationship in 2020, when COVID restrictions meant less dating around and more eating takeout with one crush. And if you’re looking to call it off with someone who was never your partner in the first place, there’s no one better to seek advice from than a zoomer dating expert.

Jamie Lee, 21, founder of FLOX, a new TikTok-viral dating and friendship app, thinks it’s time to let go of worn-out connections in the hopes of finding, well, better ones. “There’s a lot of jokes about how Gen Z doesn’t like to ‘define the relationship,’ but it’s because individuality comes first for us,” Lee tells Bustle. “We’re not as tied down to this idea that has been taught traditionally to other generations of ‘commitment’ and longevity.”

As Gen Z-ers head off to college and millennials return to more normalcy come fall, Lee shares tips on navigating the end of situationships.

Tell me why millennials are so bad at situationships.

A better way to phrase it is that situationships are more common for Gen Z, because of how culture has been trending away from “settling down.” The majority of my friends have never been in romantic relationships before, and we’re 22. I think Gen Z, more than any other generation — including millennials — puts ourselves as individuals first. The difference in how Gen Z and millennials approach love has a lot to do with the respective pop cultures we grew up in. Millennials were taught to chase relationships and stability, while Gen Z was taught to chase their dreams and independence.

Why do you think undefined relationships are easier for your generation?

We’re more clear about what we expect and how we need to be treated, even in a situationship. We’re putting less weight on things evolving into relationships. Previous generations had this timeline for relationships with an end and a goalpost to them like: You date and then you get married, and marriage is the goal. For us, instead of forward-looking, it’s now-looking. That’s why I think situationships are so normalized at the moment. It’s who is Mr. or Mrs. Right Now, instead of Mr. or Mrs. Right. [Laughs.] I think I heard that in a movie.

Why do you think it’s so hard for people to to call off situationships?

There’s so much vagueness. Especially in the early stages, there’s a power play and you don’t really know if that person likes you less than you like them. It’s a matter of crushed hopes. Like, wait — this person doesn’t even want me enough to make it official.

How do you suggest someone ends a situationship? How can you be considerate without feeling guilty?

I think it’s more likely for situationships just to fizzle out instead of there being a formal conversation to end them. Texting either dies off between both people, or one person stops responding to signal they’re no longer interested.

If you’re honest and mature about the situation when you break it off, there’s nothing to be guilty about, and the person will thank you in the future for ending it when you weren’t 100% feeling it anymore.

Let’s say it’s not fading naturally. Can you end things over text?

I’m a big believer in having important conversations in person, but if the situationship is casual, I actually think it’s better to call it off via text because that makes it less of a big deal for everyone involved. As long as you're being respectful and clear, texting is fine.

What should you say?

Either communicate that you’re taking time to focus on you or that it’s been fun but isn’t working for you anymore.

Are emojis cool to use?

No, emojis are not OK, LOL. The message you send when ending things should come across as mature. Emojis are playful and may be perceived as inconsiderate of the other person’s feelings.

What about Instagram? What’s the best social media etiquette post-situationship?

People would think it’s really weird if you posted with someone if you weren’t official, which I think has its pros and cons with situationships ending — you don’t have to deal with the repercussions of like, ‘Oh, do I now archive all these posts of us?’ But then, if you never posted about them, you never had that chance to build those memories and show the world that you were together.

The following or unfollowing depends on your relationship post-breakup. Muting is [a good option]. I’m a personal advocate for not unfollowing — that can be a little petty. But if was a bad relationship, if it was abusive, if the breakup was bad, then block them by all means.

As the world continues to opens up, and your generation heads to college while mine returns to work and social events, what’s your advice on ending something before a big life change?

Put yourself first. It’s healthy to be an independent person as you re-find yourself and the things that make you happy. Having a clear head and being really present is so important for your own growth. Also, space is good. Space doesn’t mean breaking up forever.

More like this
18 Hinge Prompt Answers To Try If You’re Looking For Something Casual
By Lexi Inks
My Partner Wants Me To Wear A Diaper During Sex. Help!
By Sophia Benoit
12 Active Date Ideas That'll Get You & Your Boo Outside
By Lexi Inks
Why Being “Too Sensitive” In Relationships Is A Good Thing
By Lexi Inks
Get Even More From Bustle — Sign Up For The Newsletter
From hair trends to relationship advice, our daily newsletter has everything you need to sound like a person who’s on TikTok, even if you aren’t.