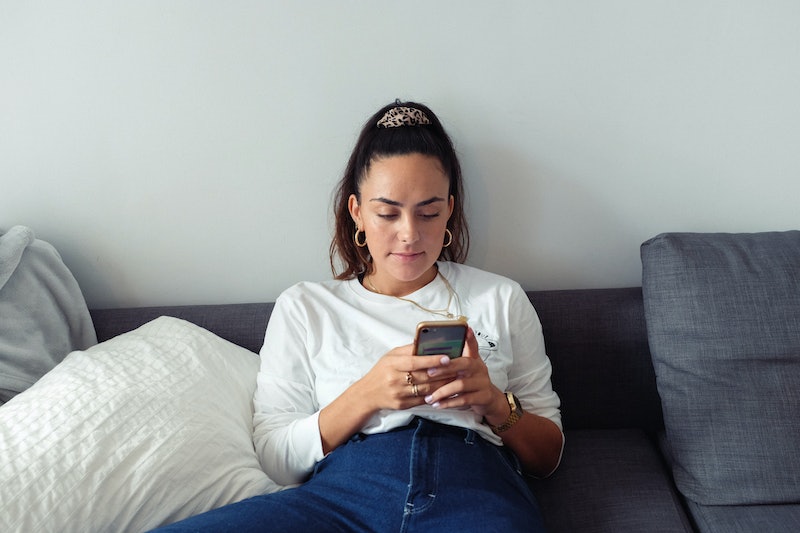 Clicking around to find out who unfollowed you on Instagram is like signing up for devastation on the level of listening to Olivia Rodrigo on repeat. Losing a follower — even if it’s just one person, and even if you barely knew them — has a way of ruining a day (or at least a good portion of an evening).

Think about when The Weeknd unfollowed Selena Gomez, or when Kylie Jenner (and then the rest of the Kardashian clan) unfollowed Jordyn Woods. Or that time when the entire beauty community on YouTube unfollowed each other during the summer of 2020. The social media act can be so dramatic it makes the news. (Celebrities, they’re just like us.)

James, 27, says he hates when he loses a follower. “When someone unfollows me, it basically triggers my fight-or-flight response,” he tells Bustle — yet he can’t seem to look away. In fact, James admits to checking his analytics 50 to 100 times a day, or whenever he picks up his phone. And when his count goes down, it puts him in a bad mood.

But, while some people need to investigate the unfollow, others decidedly... do not. You’re either staunchly in the track-each-and-every-unfollow camp, or you’re good with not knowing who unsubscribed from your feed. Either way, you’ve got to admit: Watching the one that got away can feel like crap.

Why It Hurts When Someone Unfollows You On Instagram

Unfollowing is, in essence, a declaration that a person is over you. Sure, it’s social media — but, from a psychological standpoint, your hurt feelings stem from a very real sense of rejection. “As human beings, we are all hardwired with attachment needs,” says Hala Abdul, MA, RCC, a registered clinical counselor. And Instagram has a way of providing that. If you have a nice chunk of followers and people are liking your posts, all will seem right with the world. But if someone decides to no longer take part, you’ll probably feel weird about it.

The fact folks have to go out of their way to click “unfollow” only adds to the drama. “In real life, losing touch with people happens naturally,” Dr. Holly Schiff, Psy.D., a licensed clinical psychologist, tells Bustle. A friend group might graduate from school, get busy with work, and eventually stop replying to the group chat. In the social media world, however, Schiff says an unfollow is a “deliberate act.”

But whether or not you choose to know who unfollowed you is entirely up to you. If you do want to embark on a whodunit, there are plenty of apps for that — you can basically search “track unfollowers” in your app store and pick whichever appeals to you. But instead of announcing that “Everyone loves you” or saying “With that follower count, you’re destined for fame,” these trackers simply reveal that your long-lost friend from second grade has chosen to ignore you in perpetuity.

Losing a follower — even if it’s just one person, and even if you barely knew them — has a way of ruining a day

You could also scroll through your friends list for the missing name of whoever dared turn their back on the delight that is your Instagram feed. This is the most common response to seeing a drop in numbers, says Abdul. “You proceed to go into detective mode to try and figure out what on earth happened and why,” she says.

It sounds like some form of psychological torture, but lots of people want to know when these things happen in real-time. Rachel, 24, says she launched an investigation when she noticed a couple of high school friends had unfollowed her. She dove into their pages to find clues that indicated that they’d thought her content was “too much” or if it wasn’t “aesthetically pleasing” enough.

Some social media users like to know who unfollowed them because it enables them to take revenge: by unfollowing that person right back. Sarah, 28, tells Bustle she’ll hit the unfollow button on her unfollower the second she sees the act of betrayal happen. And, when it’s someone she knows — even a cousin who lives across the country or a friend of an ex — it sends her spiraling. “I can stew for hours,” she says. “Sometimes I cry about it. Sometimes I end up archiving some of my posts because I feel like they’re the ones that caused the unfollow.”

The Case For Not Knowing Who Unfollowed You

Some folks barely notice — or literally don’t care — when they lose a follower. Ashley, 31, is one of them. “If we weren't close and I realize that we aren't friends on social media, I’ll assume that the other person made the choice for their own well-being,” she tells Bustle.

“Sometimes I cry about it. Sometimes I end up archiving some of my posts because I feel like they’re the ones that caused the unfollow.”

Ashley’s able to shrug it off by viewing the unfollow as an act of housekeeping. Everyone has, after all, gone through their friends list at some point to clean up and remove “friends” they no longer talk to — and it doesn’t have to mean anything. “Sometimes having a lot of extra people or info on social media just takes up too much headspace,” she says.

If losing followers makes you feel terrible and/or like you want to go on a Kylie Jenner-esque deleting spree, Schiff recommends trying to stop checking your followers list on a regular basis and, more importantly, avoiding tracker apps. Not only are they a solid way to ruin your day, they’re also pretty much guaranteed to amp up your anxiety.

Dolores, 31, a plus-size blogger who uses Instagram for her business, admits she used to be “so salty” when she lost followers because they equaled partnerships and opportunities. But over the past year, she decided to be more accepting of the ebb and flow. “You either like me or you don’t,” Dolores says. “Gone are my days of trying to curate a feed specifically to entice new followers or what I think someone wants to see. I’m either your cup of tea or you don’t like tea.” Simple as that.