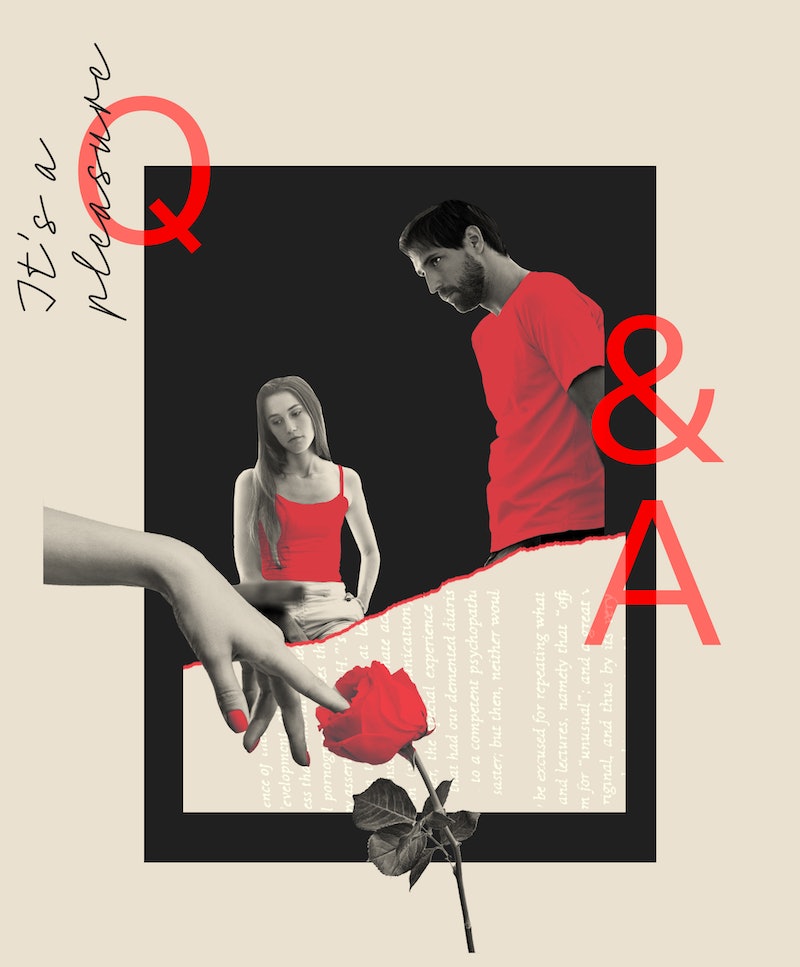 It’s A Pleasure appears here every Thursday. If you have a sex and/or relationship question, email Sophia at BustleSexAdvice@gmail.com.

Q: I've been in my first long-term relationship for just over a year now, living together the last six months, and I'm wondering, have I fallen out of love or are we just having a hard time? I've always wanted my relationships to be easy, but that's easy to say before you're in one.

A: I am, much to my own dismay, someone who is easily bored. I like excitement. Actually, I crave it. Sometimes, just wanting something can provide that excitement. For example, the idea of purchasing the perfect secondhand black leather coat can be enough in my life to keep things interesting. But the reality is, within days of having bought something new — something that I am certain will Fix Everything — the excitement wears off, and I have to move my desire elsewhere. My absolute greatest fear when I started dating my boyfriend was that I would get bored and, worse, that I was a callous person who used up people when they were new and fun and that I would inevitably, eventually discard them — or at the very least long to.

It didn’t take long for my fear to come true. About two weeks into dating my boyfriend, two weeks after I felt sure we were A Thing, even if we hadn’t used labels, I found myself wholly uninterested in him. I remember him asking if I wanted to hang out one night — something that just days before would have made me scream into a pillow — and feeling nothing. I was gripped with panic. My worst fears about myself were true: As soon as I get what I want, I become unhappy. I’m unappeasable, unreasonable, cruel even. This was the first person I’d dated in over four years, and here I was feeling “meh” a mere two weeks in!

In an uncharacteristic move for me at the time — I was 23 — I decided to be patient. I told myself I would wait another two weeks and see how I felt, but that I wouldn’t make any decisions yet, just in case this was a simple phase. And of course, within a few days I was back to being over-the-moon, disgustingly in love with him.

So, I made a promise to myself right then and there: I would never leave if I was bored; I would only leave if things were bad. Not because I deserve a boring relationship (no one does!) or because there’s an unwritten rule about how long we’re supposed to stay with someone to adequately give it a shot (there isn’t!), but because I know myself. I know that when I feel bored in a relationship, it’s not about the other person, it’s about me. Somewhere in my life I am dissatisfied, and it’s very, very easy to lay that at someone else’s feet, rather than taking the time to figure out where the ennui is really coming from.

In the thick of things, it might feel like the dissolution of your relationship — followed by a period of wallowing and a terribly expensive, ill-advised haircut — would be the cathartic solve to that dragging sense of stagnation, and maybe it would! But it’s equally possible that the restlessness is emanating from a job that’s stalled out or dissatisfaction with your living situation.

On top of that, there is very little on this earth that is more exciting than the beginning of dating someone. Long-term love is, to use some jargon, tight as hell, but it’s pretty hard to hold a candle to the thrill of when you’re just starting to fall for someone. Part of that, however, is because there’s so much uncertainty in the beginning of a relationship, which creates anxiety, and that can feel like excitement. (It’s the same reason we like haunted houses and the part three-quarters of the way through a rom-com where we “don’t know” if they’ll end up together.) Once those initial nerves quiet, it’s pretty common to feel a comedown. It’s like the feeling of the day after your birthday party — there’s nothing to look forward to anymore, no nerves, no excitement, no distraction. It turns out that life just kind of starts up again after a while, and things become… normal.

“If life outside the relationship is going fairly well, and dynamic between the two of you is what’s difficult, that’s a bright red flag.”

I cannot tell from what you wrote if any of this describes what you’re feeling. The fact that you said you’re having a “hard” time and that the relationship isn’t “easy” suggests to me that there might be something more going on beyond the new monotony of a monogamous relationship. There are all kinds of circumstances that might make a new relationship not easy — anything from caretaking responsibilities to opposing work schedules can f*ck up a relationship early on. That said, if things feel like they should be easy, if life outside the relationship is going fairly well, and dynamic between the two of you is what’s difficult, that’s a bright red flag. Relations between you two should not be that hard in the first 12 months. And if life events outside of the partnership are in fact difficult, you guys should be making it easier on each other, not harder. A sign of a good relationship is two people both trying to give more than 50%.

If you two simply do not make life easier on one another, that’s a pretty significant sign that you’re not in a good relationship. Love is fantastic, love is hard, love is worthwhile, but love is not happiness. There are a lot of people whom we love or have love for that are not right for us. Some of the reasons for this are easy to articulate — “He wants kids; I don’t” or “They cheated on me with my sister,” for example — and some are not. If you feel like you’re consistently giving more than you get from this relationship, get out. Yes, there’s often light at the end of the tunnel, but there’s also light everywhere if you get out of the d*mn tunnel.

More like this
My Partner Wants Me To Wear A Diaper During Sex. Help!
By Sophia Benoit
18 Hinge Prompt Answers To Try If You’re Looking For Something Casual
By Lexi Inks
12 Active Date Ideas That'll Get You & Your Boo Outside
By Lexi Inks
TikTok's Voluntary Celibacy Trend Has Sparked A Movement
By Lexi Inks
Get Even More From Bustle — Sign Up For The Newsletter
From hair trends to relationship advice, our daily newsletter has everything you need to sound like a person who’s on TikTok, even if you aren’t.