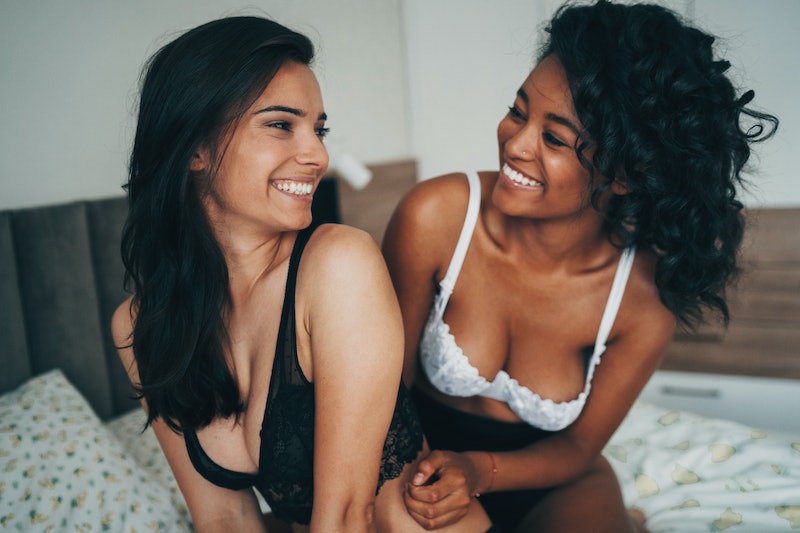 When we have sex, it’s an experience for the entire body. It’s not just the genitals that react to the stimulation and blood flow; from head to toe, your whole body undergoes a physiological response. These effects can be seen in one of the major erogenous zones, the breasts.

While you’re probably already aware that the nipples become erect when aroused, that isn’t where the fun stops. From changing shape and color to experiencing greater sensitivity and even aiding in orgasm, here are 10 ways that your boobs change and respond during sex.

Once that arousal starts to kick in, because your breasts are an erogenous zone, they immediately become more sensitive to the touch.

“Breast and nipple touch — including with the mouth or sex toys — can feel more intense, more sexual/erotic, and other ways during sex play,” according to Carol Queen, staff sexologist at Good Vibrations. “These are all effects of arousal, since bodily changes during arousal tend to strongly affect blood flow, our neurology, and our muscles.”

In fact, the reason for erect nipples is because arousal stimulates the tiny muscles in our nipples, she explains.

2. Your Breasts Get Bigger

The body goes through four distinct phases during sex: excitement, plateau, orgasm, and resolution. It’s during the plateau phase that the body undergoes the process of engorgement, with blood flowing in and “plumping” the area in anticipation of orgasm, Queen says.

Not only do your boobs increase in size during sex, but so does the areola. “Not everyone will notice the same degree of swelling, but when engorged, the area is usually more sensitive,” says Queen. “So this part of our breasts, which are highly innervated, may also feel a lot more sensitive than usual when we're sexually aroused.”

To be more specific, the apocrine glands, scent glands located in the areola, release pheromones, aka scented sweat. While you probably won’t actually smell anything, both you and your partner will be able to detect the pheromones and the release can make you even more sexually attracted to each other. “These chemical triggers can potentially affect us even if we can't directly smell them,” says Queen.

5. Your Boobs Tell Your Brain To Release Oxytocin

When the breasts are fondled, by hand or mouth, the nipple stimulation sends a memo to the brain, triggering the release of the neurotransmitter oxytocin. That “whole body” effect of sex — it also includes the brain, says Queen. Oxytocin, also known as the love hormone, is a major component in creating an emotional bond during sex.

6. Your Boobs Can Aid In Achieving An Orgasm

Not only are nipple orgasms possible, but nipple stimulation can increase sexual arousal, increasing the likelihood of clitoral orgasm. Queen describes the dual arousal of breast and clitoral erogenous zones as creating potential for “blended orgasm.” “Stimulating two erogenous zones together adds to arousal, involves more nerves, and make orgasm easier to achieve and/or stronger,” she says.

7. Your Nipples Can Change In Color

The combination of estrogen pumping through the body and stimulation of the blood vessels can cause the nipples and areola to appear pinker or darker, and create a “sex flush” across the breasts, explains Queen. This usually occurs simultaneously with facial blushing.

8. Your Breasts Might Get More Sensitive — In a Painful Way

According to Queen, for some, the “heightened neural responsiveness” during arousal can make the breasts overly sensitive, so that direct stimulation can feel like too much. “This response could also signal that the person isn’t fully aroused or that their partner has a clumsy touch — so they’re sensitive, but they are not being touched in a way they enjoy,” says Queen.

9. Your Boobs Can Take More Sensation

This article was originally published on Oct. 9, 2015