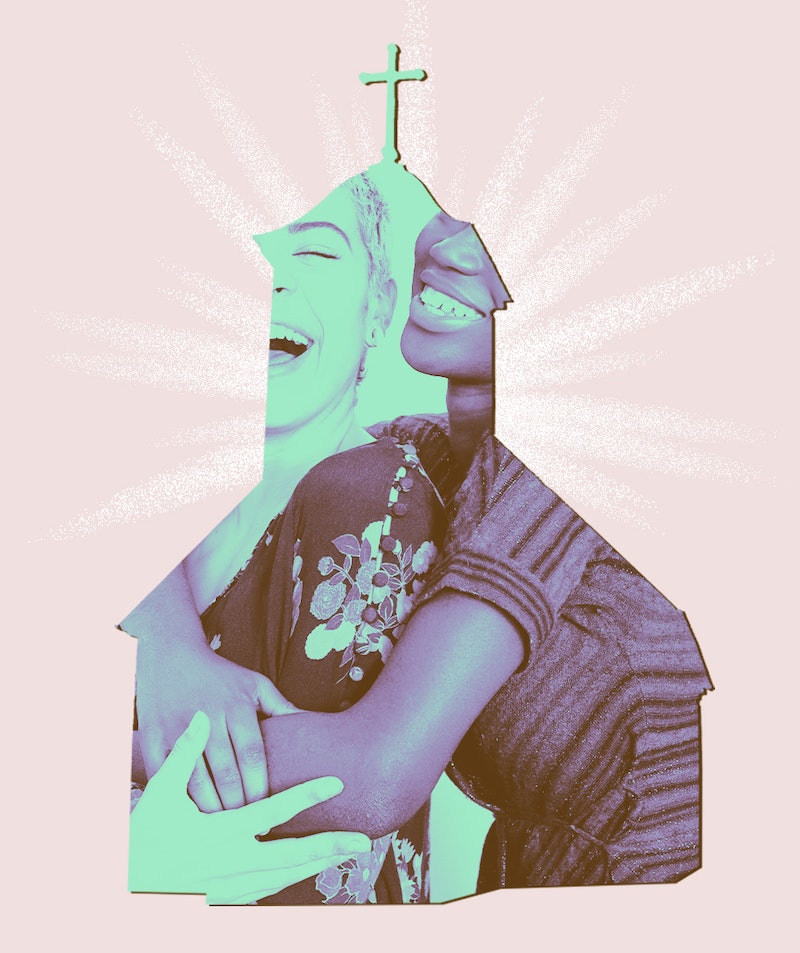 You’ve heard it a million times: “You’ll meet someone when you’re not looking.” And that was actually the case for Sabrina, who, in an effort to find a church community, found her husband, too. Below, the 28-year-old New Yorker shares the story of how she met Patrick — whom she married in December 2019 — on the worship team and the powerful moment she knew he was The One.

I didn’t know a lot of people when I moved to Washington, D.C. after college graduation to start a job in environmental consulting. My close friends and family were all in the New York area, so D.C. was a very new environment. My grandmother encouraged me to get connected to a church, and would say it pretty much every time I went home to visit her: “Find a good church home.” She actually passed the year that I did.

I started going to Grace Covenant Church, which had a lot of young professionals who were at a similar place in life as I was. Through that, I joined the worship team and got to know other people in the church, including Patrick.

We met in September 2015, about a year after I moved to D.C. I was attending my first practice with the team and introduced myself to everyone. I saw him walk in a little later and thought, He is pretty cute. But I told myself that wasn’t why I was there.

I also wasn’t really dating at the time and hadn’t actively dated in about a year — the thought of a relationship just wasn’t on my mind. After practice, he walked over to introduce himself. We had a nice conversation about where we’re from and where we went to school, and it turned out we had a mutual friend — I went to college with one of his friends from high school.

We continued talking into the elevator after practice and he was so engrossed that he missed the floor he was supposed to get off on. “Isn’t this your floor?” I asked. He just laughed and said, “Oh yeah, thanks.” I thought he might be flirting or that he was just really into the conversation.

We continued to get to know each other casually as teammates, talking after practice or Sunday services, and we kind of gained a rapport. I was starting to like him but wasn’t actively pursuing anything — I figured if it happened, it happened. Then, in November of that year, he messaged me on Facebook asking me out on a date.

I was nervous to reply. Not only had it been a year or so since I’d gone on a date, but dating in the church brings added pressure. There’s a culture of, “If you’re dating, you’re dating to get married.” So my mind jumped ahead to the altar. I thought, What if this is my husband? Am I even ready for marriage? My sister was so helpful because she saw me starting to overthink it and made me realize I could take it one date at a time and see what happens. Several hours later that same day, I gained the courage to reply, “Yeah, let’s hang out. Let’s go on a date.” After that, I felt calmer and knew I didn’t have to have all the answers right away.

Two moments stick out from our first date. First, I found out our birthdays are a week apart. I rarely meet people whose birthdays are around my time, let alone a guy I’m dating, so that made me smile. And when he offered to drive me home and I sat down in the front seat, I felt a sense of comfort — almost like I had been there before. It was odd, because he basically was a stranger at the time. Still, I felt like I had known him for a long time. Maybe this could go somewhere, I thought.

We became boyfriend and girlfriend in April of the following year. It was a smooth transition — we were already dating exclusively, we just hadn’t had the conversation about making it official. Once we did, we just continued the fun we were having together and told our family and friends.

Some people at church knew right away that we were dating. In fact, one of our friends on the worship team was there the first time we met and said, “I remember that first practice Patrick walked over and introduced himself. I didn’t get an introduction when I started the team.” Others caught on after seeing us spend time together.

We told some of our closer friends we were dating outright, and they were all very supportive. That’s something that was really helpful for our relationship and dating life because it gave us a community — a shared community — and we both were supported in that.

I’d been used to compartmentalizing my life more. I had my friends and then I had my boyfriend. With Patrick, though, everything was a bit more natural since we had shared friendships. That really allowed me to get to know him in a more authentic way and vice versa.

When people hear we met at church, I hear a mix of, “That’s so cliche,” or, “Your parents must have loved that.” And yes, they were pretty happy — that was one of the things we bonded over at the beginning, too. Both of our fathers were involved in music ministry at their churches. When we went back and told our parents we met somebody at church, they were pleased to know that we share the same faith.

My advice to anyone looking to meet someone at church is to make sure that they’re in a community that they really love and trust. Ultimately it’s about finding the right fit in the church community first. And then chances are you’ll meet somebody who’s like-minded and whom you really enjoy spending time with just because you enjoy that community.

I knew that Patrick's character was incredible early on. He was so patient and consistent — if he said he was going to do something, he did it. But I realized he was “The One” through a series of moments, some more dramatic than others. One time, he was driving me home after a Valentine’s Day event at another church in D.C., and I remember getting to a stoplight. I had just received a text message from a guy I used to be interested in, which was very random because I hadn’t spoken to him in years. I looked up at the street sign — Patrick Street. It felt like time stopped a little bit — I froze. Then the light changed. Patrick had no idea what was happening. He just kept driving, and we stayed on Patrick Street the whole time until we got on the highway.

More like this
Here's How To Stop Being Codependent In Your Relationship
By Madeline Howard
How To Let Go Of Someone You Love, According To Experts
By Madeline Howard
How To Know If You’re A Hopeless Romantic Or A Hopeful Romantic
By Jessica Estrada
The Juiciest “Would You Rather” Questions For Couples
By Alice Broster and Rachel Mantock
Get Even More From Bustle — Sign Up For The Newsletter