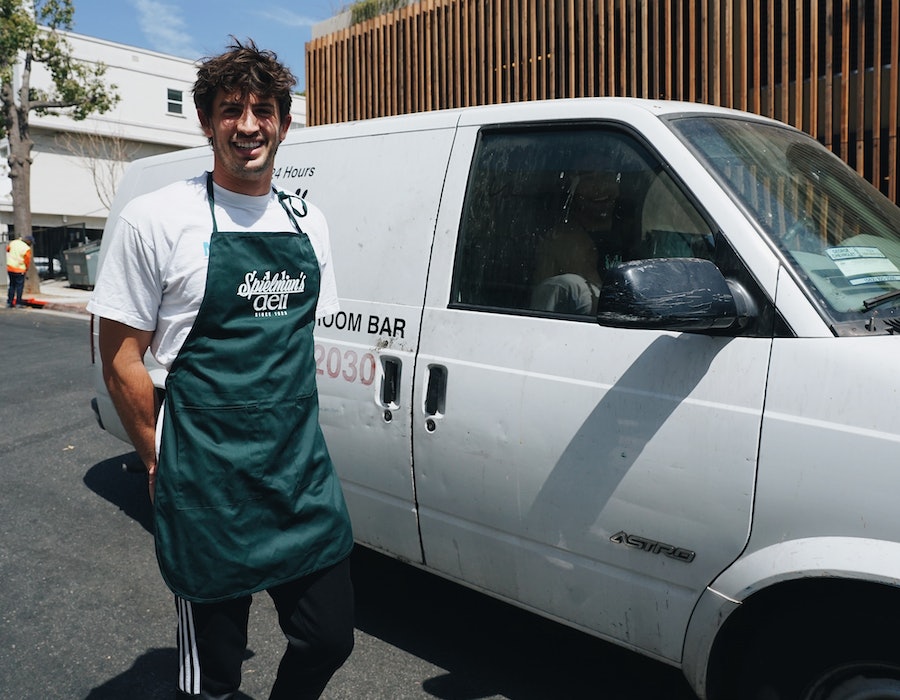 Kevitch launched the Lox Club over the pandemic, after a bad breakup and a bit of badgering from his bubbe. “I was at the age where my grandma would joke, ‘When are you going to bring home a nice Jewish girl?’” the 30-year-old tells Bustle. While the members-only dating app is billed for “Jews with ridiculously high standards,” it’s really for anyone with a sense of humor — especially if it’s of the Larry David variety. “I don't like dating apps; they're very inorganic and awkward,” Kevitch says. “So I wanted to make a more fun, immersive experience where maybe you'll meet people as a byproduct and not take it so seriously.”

Two years later, the swipe-based, highly curated app has achieved just that. Be it through their cheeky “prompts” — which range from “my bar/bat mitzvah theme was” to “the weirdest sext I’ve ever gotten” — or their past in-person events like the nostalgic, Passover-themed “Matzah Pizza Party.” And it’s the events side where Kevitch sees the most growth potential for his company, wanting them to become the “Disney of dating apps.” “I love how Disney does the digital side of things, but they also have these in real life immersive experiences, [like] the theme park,” he explains. “That's what I imagine for our evolution. We continue being the best possible app, but I also can see the Lox Club in real life as a really cool secret speakeasy.” Just like bubbe would want it.

Below, Kevitch tells us about launching the Lox Club, the best flirting strategy, and being on his own app.

You’ve said that the Lox Club started off as a joke, but making a Squarespace for a fake business is a real commitment to the bit. What was your impetus for going all-in on what, at the time, was a fictitious dating app?

So I've done that before in other shapes and forms. Once I went to a planetarium show at Griffith Observatory, and I was so inspired that as a joke, I made a planetarium show in my house. Fast-forward — after a lot of writing and directing — we did over a hundred planetarium shows out of the house. With the Lox Club, I thought it would be funny to make a website making fun of the elitist, exclusive [dating app] culture. So I wrote, “An exclusive dating app for Jews with ridiculously high standards.” And there was an apply button. Then, to my surprise, a couple of days later, a thousand people had applied, and people kept asking me when they’d find out if they got accepted or not.

Each dating app has its own identity. Raya is uber-exclusive. Bumble is girlboss-y. Tinder is known for hookups. How did you develop the Lox Club’s cheeky ethos?

It really starts with what we call the eyeroll test. Everything we do we pass through that filter. It's actually pretty fun and easy because most of our team has used dating apps or we’re using them right now. So we know what we roll our eyes at.

What are some things people often do on dating apps that you and your team would “eyeroll”?

A shirtless pic. Anything overly braggy. I also think it's eyeroll if you're very basic and cliche. One of our conversation prompts is “What is something you enjoy?” If you write “sushi,” it’s like no sh*t, everyone loves sushi. That doesn't make it easy to start a conversation with you. So it can help to be more specific. Instead of writing “sushi” write, “The thought of fish eggs on top of eel makes me want to vomit.”

You’ve recommended sticking to sarcasm. Why is that brand of humor a successful flirting tactic?

I think it’s more authentic. When you can make fun of yourself or show sarcasm, it’s really another way of showing your personality. Showing what parts of life you find silly, that you love, or you hate. There are some apps that just don’t really make it easy to do that, or people choose not to do it. Then you don’t know anything about them when you meet them in person. It’s just so much easier to talk to someone when you get a sense of their quirks.

You’re famously single. On the Lox Club’s FAQ, there’s even a section that says that you, yourself, are on the app. What has it been like to have your entrepreneurial journey dovetail with your quest to find love?

First of all, I did not write the FAQ myself. My team did that to troll me a little bit. But I always joke that it’s poetic irony that I created this thing where I’m witnessing all of these people fall in love and I’m home working until like 10 p.m., very single. I definitely want a girlfriend, but also being single helps with running Lox Club because I know all the pain points that single people feel and I know exactly what I would want in an app. I think once I’m living “happily ever after” with someone running off into the sunset, I won’t be as in touch with all the annoying things about dating.

More like this
Hinge Added A Video Prompt Feature, So Get Your Camera Rolling
By Hannah Orenstein
Are Quality Time & Gift-Receiving Love Languages Compatible?
By Lexi Inks
The Differences Between Polyamory & Open Relationships
By Lexi Inks
20 Women Reveal Exactly How Long It Took Them To Get Over Their Ex
By Amanda Chatel and Lexi Inks
Get Even More From Bustle — Sign Up For The Newsletter