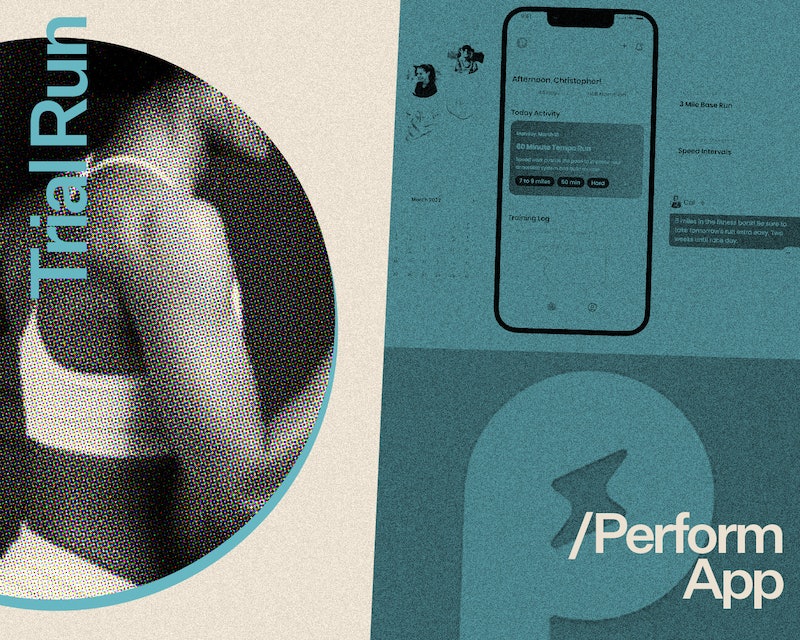 In Bustle’s Trial Run, an editor shares her unfiltered opinion as she sweats through the buzziest workouts, visits must-know fitness studios, and puts the latest exercise tools to the test. Here, an inside look at Perform, a fitness app centered on running.

Whenever someone asks what kinds of workouts I do, running is always the first thing I name. But I always follow that up with “I’m not a professional runner, though,” because saying you’re a “runner” typically entails marathon training and long distances and an entire sneaker wardrobe — you know, that pro runner stuff. And, although I absolutely love to run and have been doing it since I was in high school, I’ve never run in a race or logged more than 6 miles in one day. I don’t feel like my endurance is the best, and I may not be training properly even though I run often. In other words: I could certainly use some help with my running game, and that’s where the Perform app comes in.

The Perform running app is a digital platform that connects you with a real-life running coach who builds a personalized training program for you that caters to your fitness level and goals. Beyond that, you’ve got digital access to your coach through your phone — so the app brings you a virtual personal trainer that specializes in running and offers everything from workout adjustments to support as your accountability buddy.

Perform’s goal? Through a customized training regimen and one-on-one access to a coach, you can become the runner you’ve always wanted to be. Read on for my honest review of the fitness app.

Once you download the Perform app, you can choose between three membership tiers: Basic for $39 a month, Core for $89 a month, or Plus for $149 a month. All come with personalized training plans and access to your coach, but the differentiating factor is how much access you have to them. The Basic membership gives you weekly access, while the other two offer daily access. And with the Plus membership, you get the added perk of ongoing video calls with your coach for even more accountability.

To monitor your runs, the app can be integrated with Strava, Apple Watch, Garmin, and other platforms and trackers. With that data — or with the info you manually put into the Perform app — your coach can analyze your results and give real-time feedback as they adjust your plan to keep you on track.

Before your first workout, you fill out a questionnaire on the app that asks you about your current training regimen and fitness level (think: how long have you been running, how many miles do you run each week, and are you currently training for anything specific). That way, you’re set up with an appropriate coach. I matched with Bridget Mclaughlin, a long-distance runner who has a special focus on 5K marathon training with beginner and intermediate-level runners (moi). Once you have your coach, you schedule a video call to chat more about your current workout routine and what you’re looking to get out of the training program. Then it’s off to the races.

I told Bridget about my running habits. As in, I do it four to six times a week in an interval-training capacity (I run faster in shorter bursts with jogging or walking recoveries versus running for 30 minutes straight without stopping) and average 1.5 to 3 miles each time. Mclaughlin’s No. 1 tip for me to up my endurance? Go slower.

“Even if you’re used to running 6 miles per hour on a treadmill, you’ll have an easier time running for longer if you go at a slower speed,” Mclaughlin told me in our video chat. This speed was, in theory, one that I’d be able to comfortably hold without totally gassing myself. “Keep your effort level at six to seven out of 10, focus on your breathing, and make sure you’re able to speak a few words at a time without gasping for air,” she said.

To work on this, Mclaughlin put together my workout plan for the week: I began with a 30-minute base run, which I was to do three days out of the week with three HIIT training days and one rest day in between. She also gave me tips for how to get the most out of each — for example, she recommended a thorough warmup before each base run that involved dynamic stretches and foam rolling. I was also to cool down for a few minutes after the run to make sure my body was better able to recover.

Note that Perform itself isn’t a workout app, but a fitness platform that allows for virtual one-on-one training with a pro. It’s kind of like Strava, in that it tracks your running data and workout details — only, of course, Perform has an actual run coach analyzing it and putting that towards your next week of workouts. So the workout itself is up to you.

I used my beloved Peloton app to stream runs and boot camps, and my Apple Watch transferred that data to Perform. Even though the Peloton runs I took were more interval-based and called out certain speeds, I basically used the video for moral support so I felt like I was running with someone even though I was going at my own pace. For my very first run as a Perform member, I made a conscious effort to take it slow — like, much slower than usual. Typically, I alternate between 5 miles per hour for jogs and 6 to 7 miles per hour for runs... but these runs are usually done in four-minute-long intervals (or less). Since my goal was to work on my ability to run for longer without stopping so often to catch my breath, I chugged along at a steady 5 miles per hour — which was harder than I thought it would be.

My first few runs were tough; my legs wanted to go faster, so forcing myself to go slower felt like an act of restraint. After a few base runs, though, I found my endurance improving: First, I blew my own mind when I ran for a whole 12 minutes without stopping to walk (don’t @ me). By the end of my second week of training with Mclaughlin, I ran — at 5.2 miles per hour — for over 20 minutes straight. That’s a Herculean effort in my book. While that’s a speed I’d typically consider a jog, Mclaughlin made me realize that “running” looks different for everyone, and since this speed spiked my heart rate to about 65% of my max, it definitely counts.

Two months into my Perform trial, I’m happy to say that I’m becoming more of an endurance-running girly than I thought I could be. I credit that to Mclaughlin’s detailed instructions for not only my warmups and cooldowns, but also her sage running wisdom: Although it sounds so simple, starting slow is the first step in building a foundation to becoming a better runner. And that’s something that I had never done in my over two decades of running — I had always been a go hard and fast kind of person and never focused on my endurance... even though endurance is all about the breath, aka the literal thing that gets you through runs.

As much as I love the workouts I was doing before, I don’t think I could have achieved my newfound Better Runner status without one-on-one training with an actual running coach. So if you’re looking to become a better runner — of any kind or level — I’d highly suggest giving Perform a shot.

More like this
Are Those Under-Desk Treadmills Actually Worth It?
By Carolyn Steber
7 Challenging Yoga Poses That Turn Up The Heat
By Carolyn Steber
How Many Burpees Should You Do Per Day? Here’s What Fitness Trainers Say
By Carolyn Steber
The 11 Benefits Of Aerial Yoga, According To Trainers
By Carolyn Steber
Get Even More From Bustle — Sign Up For The Newsletter
From hair trends to relationship advice, our daily newsletter has everything you need to sound like a person who’s on TikTok, even if you aren’t.