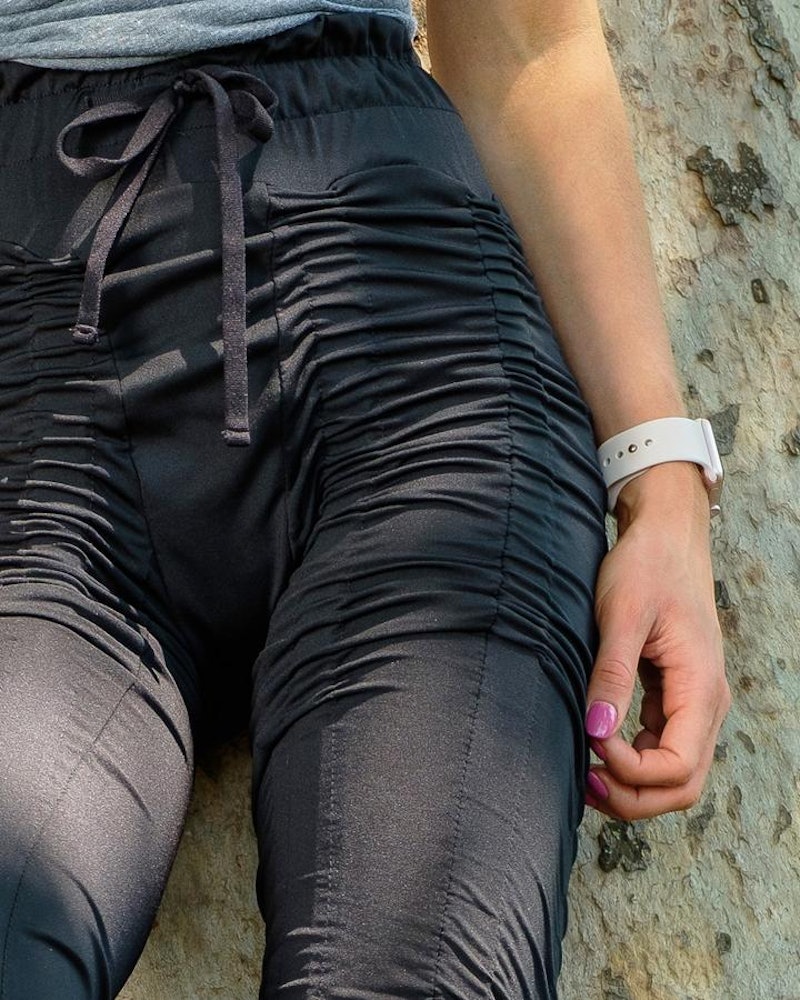 Remember those ab toner belts, the ones from the infomercials that would supposedly shock your stomach muscles into a six-pack? As much as I tell myself I love holding planks, if I could get ripped while watching The White Lotus on the couch, I would. While those ab-jigglers were proven not to work (sad!), the fitness industry has never ceased trying to find shortcuts to make your workout more effective in less time. Enter resistance band leggings, which claim to amp up any activity, from walking around your house to hardcore workouts.

There is pretty much only one brand on the market, AGOGIE, which sells Resistance Training Pants for $130. Though they’ve been around since 2017, when I discovered them recently, I was intrigued. Could they make sweat sessions sweatier? Would everyday activities, like walking up and down stairs to fetch laundry, make me stronger without much thought? I decided to put them to the test.

What Are Resistance Band Leggings?

First, the basics. Resistance band leggings are exactly what they sound like: workout leggings with resistance bands sewn into them. The built-in bands add a layer of difficulty over the natural muscle and ligament lines, making every movement that much harder. AGOGIE claims this helps build secondary support muscles while activating your core, lower back, and hips, ultimately helping you gain power and speed. (Professional hurdler Tawnie Moore, who made it to the 2021 Olympic track and field trials after training in the leggings, would probably agree, but she’s also an AGOGIE ambassador, so.)

AGOGIE’s leggings feature eight bands, which run vertically down the legs. The bands in the back run over the glutes, down the hamstring and to the ankle, while the front bands hug your kneecaps. The leggings also have stirrups at the bottom of each leg — haven’t worn those since kindergarten! — which stretch the bands into place.

From a distance, they look like basic black leggings, but up close is another story. They won’t be the cutest leggings in your closet, unless ruching is your look, nor the most flattering, since the bands are quite bulky. That said, who cares what the hottie in your HIIT class thinks of your leggings? More colorways are being launched later this year, per the brand, but black will likely camouflage the ruching best.

Getting them on, for the first time at least, is reminiscent of the skinny jean squat circa 2010. I got the hang of it quickly though, jamming my foot into the stirrups and then slowly stretching the bands and legs up. The stirrups, for me at least, stayed in place perfectly and didn’t feel awkward or irritating in running shoes.

What Is Working Out In Resistance Band Leggings Like?

The leggings come in two different resistance levels: the +20 and the +40. The +20s are the “easier” pair, meant for all-day wear and mellow activities, such as walking the dog or gentle yoga. If you’re looking to amp up hardcore workouts, like speed training and strength building, grab a pair of the +40s. I wore the leggings for three different workouts of varying difficulties over the course of two weeks to see how they really worked.

For my first workout in the resistance band leggings, I took it easy — maybe a little too easy — on myself. After a day of wearing them around the house, and delusionally hoping I would magically wake up with Gigi Hadid thighs, I revved up a Peloton barre class, a near-daily activity for me. The pliés and tendus felt more difficult, surely, but not unbearable. While I was hoping to be bedridden the next day, thighs too exhausted to take a single step, that wasn’t the case. Instead, I felt as if I’d taken any other barre class. So the next day I tried another barre class, this time with the +40s, and did that for another two days. The classes were 10% more difficult, but 100% manageable. Again, I felt… the same.

I laced up my running shoes and took off for a jog in the +40s around my neighborhood for my next workout. Running isn’t my strong suit, and costs effort for me to enjoy even without eight resistance bands wrapped around my legs. Halfway through my normal five-mile route, I felt wiped out. I wasn’t anticipating cutting my run as short as I did, nor the ego destruction that came with it. While the actual movement of running didn’t feel that much harder, my heart rate would tell another story. My legs weren’t sore the next day, but my arteries might have been.

To cap off this experiment, I took a HIIT-style bootcamp, moving between short bursts of cardio and strength movements. This is where the leggings can really shine — literally, because you’re going to sweat profusely all over them. Keeping up with reps isn’t normally too much of a challenge for me, but I found myself lagging behind the instructor, each mountain climber feeling more and more like a real mountain. I was exhausted. Job well done, leggings.

If you want to maximize an intense workout or add a bit of resistance to around-the-house activities, invest in a pair. I trust added resistance, even if it doesn’t make me sore enough to be bedridden, works some sort of heart health magic. So while I probably won’t wake up with Beyoncé legs anytime soon, I’ll keep wearing the resistance band leggings. Maybe even on another run, if I dare.

More like this
10 Muscles You Work During A Kettlebell Swing
By Carolyn Steber
The Secret To Mastering Crow Pose In Yoga
By Carolyn Steber
Are Those Under-Desk Treadmills Actually Worth It?
By Carolyn Steber
7 Challenging Yoga Poses That Turn Up The Heat
By Carolyn Steber
Get Even More From Bustle — Sign Up For The Newsletter
From hair trends to relationship advice, our daily newsletter has everything you need to sound like a person who’s on TikTok, even if you aren’t.