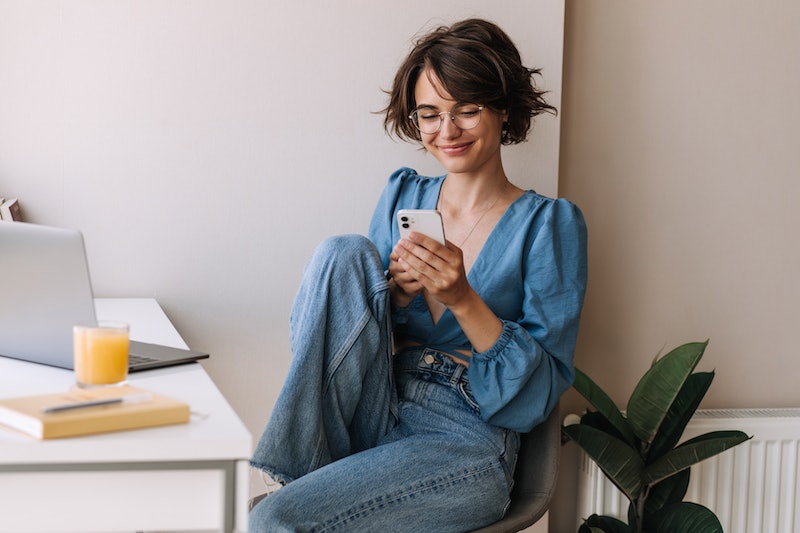 Most people would agree that music has the power to affect your mood. Whether you listen to chill tunes to wind down in the evening or blast beats that get you pumped up for a workout, often all it takes is hitting play on a song to completely change how you feel. That’s the idea behind Spiritune, an app that uses music therapy and neuroscience to create “a soundtrack for a healthier life.”

Instead of creating your own playlists, Spiritune’s music app has a team of composers, neuroscientists, and music therapists who do that for you. The result? A tailor-made track list that’s designed to help you meet a specific emotional goal, whether that’s to feel calm, energized, focused, or relaxed enough to sleep. The app updates these playlists every week, too, so you always get something new.

Founded by Jamie Pabst, who was inspired to improve her mental health in the midst of a stressful career, Spiritune’s goal is to help you feel better with its scientific, music-based approach to shifting one’s mindset. As someone who’s constantly shuffling my way through various Spotify playlists to match my mood throughout the day, I was definitely intrigued — so I tried it out for a week to see how it worked. Here’s what to know about the app.

Upon first listen, you might think Spiritune sounds like a typical chill-out playlist, but there’s actually a lot of science that goes into each song. According to the Spiritune team, they use clinically informed, evidence-based research in music therapy and neuroscience to figure out which musical characteristics evoke certain emotions in the brain. The composers then whip up songs that use those characteristics to help you achieve a certain mood or goal, which means each instrument, sound, and tempo is chosen with intention.

That’s why Spiritune immediately asks how you’re feeling when you open the app. Toggle a curser towards Energetic, Anxious, Lethargic, or Chill — or somewhere in between — to let the app know about your current emotional state. It then asks how you want to feel, whether that’s more energetic or relaxed.

After that, the app gets a little more info by asking what you’re doing. Click on the option Work Flow if you want music to keep you productive and focused. Tap Winding Down if you’re in the mood to relax after a long day. Go for the Sleep track list when you’re ready to snooze. Or opt for Waking Up when you need to roll out of bed.

I first tested Spiritune in the middle of a busy afternoon, so I tapped on Calm and then Work Flow to emotionally settle somewhere between mellow and focused while I got stuff done. A track called “Sailing Onward: Journey to Chill” began to play, which wasn’t so very different from what I normally listen to.

My go-to work playlist features a lot of repetitive, low bass beats, electric synths, and ’80s-style sounds that I’ve carefully curated to lull my brain into the zone. I’m also a big fan of the lo-fi playlists on YouTube that have lounge-y, jazzy, or hip-hop beats. Either way, I don’t listen to music with lyrics while I work.

“Sailing Onward” sounded more like a relaxing meditation track you’d hear in a spa, but it still had that lyric-less sweet spot I crave. For me, it was an easy adjustment to go from one chill tune to another, but I did think of my friends who need to blast Nelly’s top hits from 2003 in order to get anything done. For them, I could see Spiritune being a more drastic change.

“Sailing Onward: Journey to Chill” continued to add different layered sounds, which I assumed were working together to tell my brain to stay relaxed yet focused — and that’s exactly what it did.

The next time I listened was early in the morning when I was still in the process of waking up, so I toggled towards the Energetic option to see if it could get my gears turning. This second playlist included a song with a heart-beat-like bass in the background (my fave) and another with gently layered synth tones (ooo, aahhh). There was even a cricket noise at one point, followed by a round of jingly wind chimes. It made for a uniquely relaxing yet interesting combo, which can be tough to nail. And yes, it did seem to set my mind on a course toward the mood I had requested.

The instrumental tunes on Spiritune are the type you’d want to play while meditating, focusing on a project, or in the evening to de-stress or drown out background noise while you sleep. After listening for a few days, I was impressed by how each song really did seem to cater to a specific need.

I really liked that the focus tracks, for instance, had enough variation to keep my brain interested but not distracted as new sounds and instruments were seamlessly introduced. (There was, however, one jangly track that seemed too loud, so I just skipped it.)

I’d recommend giving Spiritune a try, especially if you’re always crafting your own playlists to work or sleep to. You’ll get quite a few free tracks before you’re asked to sign up for an official seven-day free trial, after which you’ll need to pay $9.99 month-to-month, $6.99 per month annually, or $299 for full, everlasting access. The app is available for iPhone and Android phones.

For bests results, I’d recommend listening with headphones — especially noise-canceling ones — so that you can fully immerse yourself in the science-y musical experience the neuroscientists and composers intended.

While you can always make your own playlist on Spotify, Spiritune is a good choice when you want someone to do that work for you. Personally, I find its functional music to be really cool — and it really works.

More like this
The Crab Walk Exercise Improves Your Posture & Overall Strength
By Carolyn Steber
Bonnie Milligan's Wellness Routine, From Daily Journaling To Drugstore Teas
By Jessica Derschowitz
9 TRX Exercises For Beginners, Straight From Trainers
By Carolyn Steber
The Sculpt Society Workouts Bring Out My Inner Backup Dancer
By Carolyn Steber
Get Even More From Bustle — Sign Up For The Newsletter
From hair trends to relationship advice, our daily newsletter has everything you need to sound like a person who’s on TikTok, even if you aren’t.