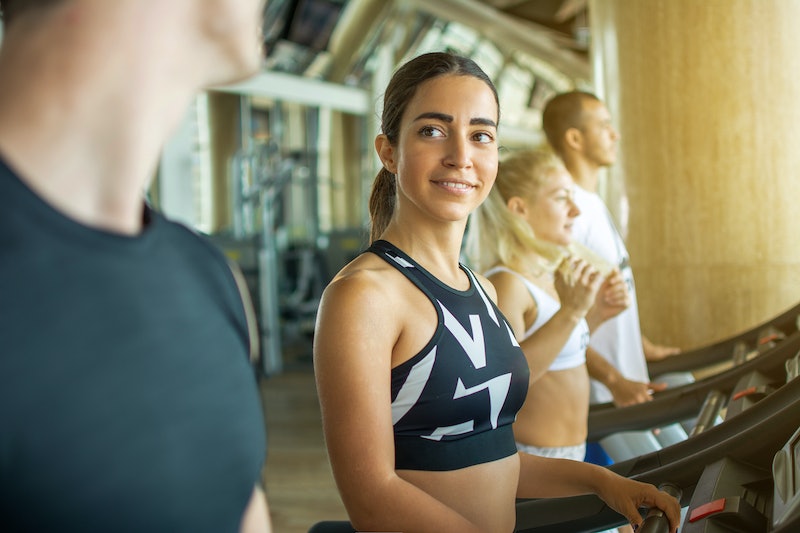 If you dream about turning a workout into a meet-cute, don’t worry: There are plenty of ways to go about getting a little extra attention at the gym. You could wear a nice workout set, strike up a conversation, or ask about someone’s arm routine. That, or you could go rogue and try the new vabbing trend from TikTok that suggests wearing a few dabs of vaginal fluid as perfume.

Yup, that’s what vabbing at the gym means, and — in theory — it’s supposed to help you snag a partner. Started by TikTok user @jewlieh, who racked up over 200,000 likes with her vabbing success story, vabbing is the act of dabbing your vaginal fluid on pulse points, like your wrists or behind your ears, so that your pheromones can waft about the gym and do all the heavy lifting. (No pun intended.)

According to @jewlieh’s video, she vabbed and then proceeded to casually do lunges on the treadmill like it was NBD. And just like that, a guy wandered over to start up a convo. They ended up exchanging numbers, and even made plans to meet up for a lunch. So, would this guy have spoken to @jewlieh anyway? Or was he entranced by her “perfume”? While the world may never know, there is a connection between scent and attraction. Read on to learn more about this very, uh, sensual thing you can do at your next workout.

Does Vabbing At The Gym Really Work?

According to Erin Flynn, DNP, FNP, a family nurse practitioner with Favor, a pheromone is a chemical compound that plays a role in mating. “Pheromones are released by exocrine glands in the body, commonly found in our pits, pubes, and breasts,” she tells Bustle. And yes, humans are able to pick up the scent and subconsciously react to it.

While research is currently limited and not the most inclusive, Flynn points to several studies that back up the idea that subtle body odor can do funny things to the brain. A 2018 study, for instance, found that odor obtained from cis women during their most fertile time of the month was rated by cis men as “more attractive” when their estrogen levels were high, Flynn says. And a 2013 saw a connection between pheromones dripping off sweaty men and improved mood and focus in women.

So, should you stick your hand down your leggings, swirl it around, and lightly pat your neck? The jury is still out — not to mention it might be easier to get a few drips of pheromone-laden sweat from your armpits or breast area instead. In fact, Flynn says these studies focused on chest and armpit sweat, not groin sweat or vaginal fluid. Still, TikTokers seem to be really into it.

Gym equipment is already covered in sweat (and who knows what else), so the idea of folks adding more fluid to the mix might be tough to imagine. (Just take a look at the comments section under any vabbing video.)

It’s common and normal to have vaginal discharge, but Flynn says it can potentially transmit disease. So while you should feel free to experiment with vabbing in your spare time, it might not be a good idea in public places like the gym.

If you’d like a sexy, sexy pheromone to find its way to your next date, all you really have to do is sweat.